NFL playoff picks: Rounding up the experts' predictions for Eagles-Giants

On paper, the Eagles are the better team, but do writers and analysts think it will play out that way? 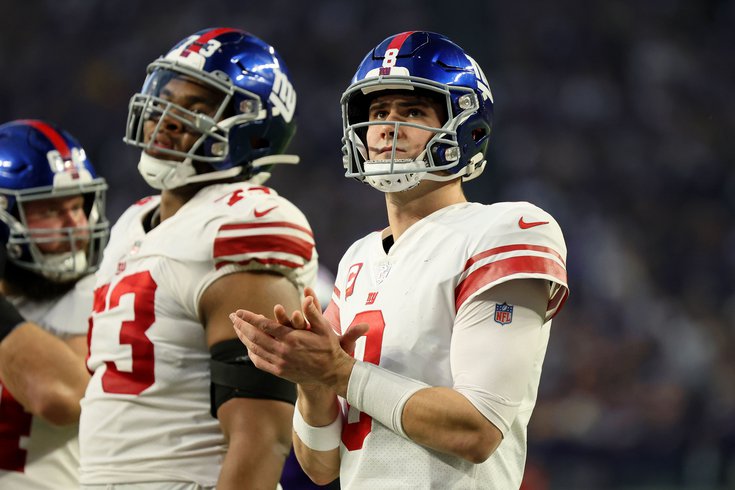 Daniel Jones and the Giants will face the Eagles once again, looking to keep an unexpected playoff run alive.

With a week off, home-field advantage, and a healthy (enough) Jalen Hurts and Lane Johnson, the Eagles are finally set to begin a playoff run that fans have been anticipating since the middle of the season.

Just one more day until Super Bowl aspirations are put to the test against the upstart and NFC East rival New York Giants in primetime.

For our own Kyle Neubeck, the Eagles are the better team. It's best not to overthink this one:

After hearing the Eagles cut off "Dreams and Nightmares" to play Eminem in the year 2023, I nearly changed my pick…

However, I’m going to stick with the theme of not overthinking picks that I’ve stuck with all year. The Eagles were the better team all season, and have a better quarterback (albeit, maybe a banged-up QB) with great weaponry. They’ve been better against the run after a stretch of getting killed on the ground, so I’m not as fearful of Barkley as I would be otherwise. I also don’t buy the “It’s hard to beat a team three times!” thing because the 2-0 team has historically won the third game more often than not.

The Giants have a shot, for sure, but I’m still rolling with the better team playing in front of a hostile home crowd. [PhillyVoice]

How's everyone else feeling?

• The Inquirer: Is there room for a Giants upset? Sure. But all three Inquirer scribes see an Eagles victory. Wrote Josh Tolentino:

New York’s best chances at upsetting the Eagles might rely on the running back Barkley. Both New Orleans and Washington rallied for upset victories over the Eagles by trimming possessions, forcing turnovers, and dominating time of possession. The Giants might attempt repeating that formula in order to keep Hurts and Co. off the field.

The Eagles possess ample offensive weapons (Brown, Goedert, Smith, Miles Sanders), defensive playmakers (Haason Reddick, T.J. Edwards, Gardner-Johnson), and a handful of key veterans (Kelce, Brandon Graham) to navigate the nerves that are attached with the playoffs. In the end, Hurts’ success will determine exactly how far this season goes.

• Gregg Rosenthal, NFL.com: The Eagles know how to win in any type of situation and have more depth in the trenches. That will get them through, 29-22.

What matters more: The body of work from the whole season or the last month?

The Giants are peaking at the right time, able to blitz less on defense because of a healthier defensive line. They are also willing to trust Daniel Jones to do more. The receiver group is established and underrated. The coaching staff is on a roll. Like the Eagles, their running quarterback makes them dangerous in short-yardage and red-zone situations. They deserve to be here.

Meanwhile, the Eagles stumbled to the finish line and now face injury questions to some of their best players. Lane Johnson and Jalen Hurts are back, but will they be the same?

That said, the Eagles' ability to win every type of game should serve them well here. They won't need Hurts to handle the blitz in passing situations if they are rarely in them. Perhaps the most critical team-building strategy of Philadelphia's analytical front office is the belief in paying for quality and quantity up front. The Eagles are tougher and deeper than the Giants on both lines. They can run the ball better and rush the passer way better, harassing Jones and letting their superior overall talent take over. [NFL.com]

The Giants impressed on offense in beating the Vikings last week, but this is a much tougher challenge for Daniel Jones and Co. The Eagles led the NFL in sacks and have five guys who had 10 or more. That's pressure. The Giants have been leaky at times on their line, which has to be a concern. But offensive coordinator Mike Kafka does a nice job of scheming things up for Jones. The Eagles didn't look great on offense in the regular-season finale against the Giants, who rested players that day. Jalen Hurts was back for that game after missing two, but he didn't look great. The extra time will help in terms of his health. Look for the Eagles to attack through the air here, but the Giants have come alive on the defensive front. Without Lane Johnson, that could be a problem for the Eagles. Even so, look for Philadelphia to pull it out and advance to the NFC Championship Game.

• ProFootballTalk: An expected blowout vs. an upset over at PFT.

MDS’s take: Brian Daboll has done an incredible job getting Daniel Jones to the point where he can have a playoff game like he had last week against the Vikings. This week against a much better Eagles defense, I find it hard to believe Jones can do it again. Jalen Hurts will put plenty of points on the board for Philadelphia, and Jones and the Giants won’t be able to keep up.

Florio’s take: It happened in 2008, when the Eagles beat the top-seeded Giants. It happened in 2007, when the Giants beat the top-seeded Cowboys. And it could happen again, with the Giants getting their revenge, 15 years later. The Giants are gaining momentum, improving at the right time. The Eagles have been wobbly for the past few weeks. Daniel Jones and Dexter Lawrence have become superstars before our eyes. Saquon Barkley is running as hard as ever. Isaiah Hodgins is the guy opposing defenses refuse to take seriously. Brian Daboll outcoached Kevin O’Connell last week, and could be ready to outcoach Nick Sirianni. It won’t be easy, but nothing has been easy for the Giants this year. Expect a Saturday night classic, one that the Giants could indeed win.

• Bill Bender, The Sporting News: Jalen Hurts and his health are the X factor.

The Eagles are making their second playoff appearance under Nick Sirianni, and they are catching a confident New York team that beat Minnesota 31-24 in the wild card round.

Philadelphia swept New York in the regular season. The Week 18 matchup was close at 22-16. The Week 14 matchup was not in a 48-22 blowout. The Eagles had seven sacks in that matchup, and that will be the key against Daniel Jones, who has thrown just two interceptions in his last seven starts and threw for 334 yards against the Vikings. If New York can stay committed to Saquon Barkley – who had just 28 yards in that first meeting – then this could get interesting.

This game comes down to Jalen Hurts, whose season was thrown off with a shoulder injury against Chicago. He had 294 total yards and three TDs in the first meeting. How much did the extra week of rest help? If the Eagles can get the running game going around Miles Sanders and build an early lead, then it won't matter. If they give defensive coordinator Wink Martindale time to settle in with a solid pass rush led by Kayvon Thibodeaux, then an upset is possible. Philadelphia escapes, but the Giants push them to the limit.

• Vinnie Iyer, The Sporting News: More talent and the Philly crowd will leave the Giants only able to keep up for so long.

Jones has been on point passing with better protection, despite with limited receivers. But the Eagles' pass defense is tough with their pressure and coverage, while the Giants will need to deal with A.J. Brown, DeVonta Smith and Dallas Goedert.

Jones and Barkley will be game to keep their team in the game, but the Eagles have a strong home-field advantage coming off a bye and will pull away in the second half.