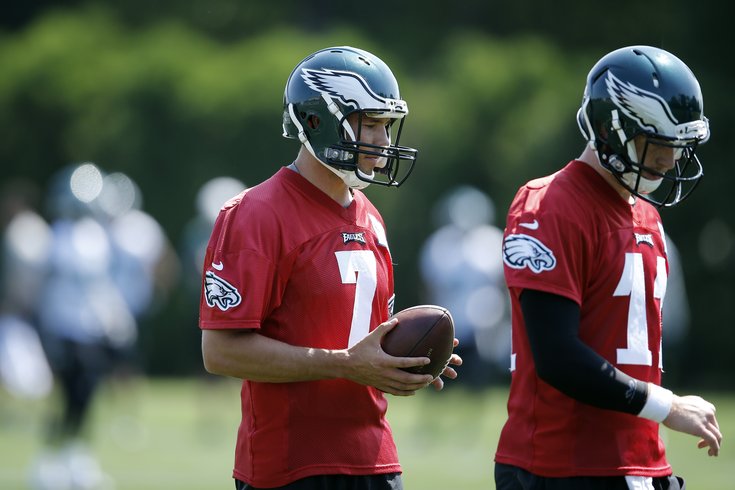 Sam Bradford is behind Carson Wentz. Well, in this picture he is, anyway.

The third and final media-attended Eagles OTA session of the 2016 offseason is in the books, and Sam Bradford had himself an ugly day. As a reminder, it's still May. There will be times undrafted free agent rookies light it up, and future Hall of Famers have off days. Who plays well in practices in May doesn't mean a ton, however, with that disclaimer out of the way, here's what I saw.

• As noted, Bradford had a rough day. Three bad plays stood out:

• In my opinion, Malcolm Jenkins is clearly one of the best players on the team, possibly top five. If he just had better hands, he could be an elite safety in the NFL, as we noted early last season.

• Getting back to the quarterbacks, I thought Chase Daniel had a good day. Nothing flashy, but he generally hit receivers with good ball placement. On one drive down the field, he hit undrafted rookie free agent Paul Turner (I think) in the back of the end zone for a score. Daniel was fired up, yelling "GOOD SH**!" to Turner. We'll get to the rookie QB at the end.

• Back in the Andy Reid days, the Eagles used to run a play to DeSean Jackson that had an inordinate amount of success. It was a fairly basic concept. They would line up two tight ends on one side of the formation, and two wide receivers on the other side, with Jackson in the slot.

For example, they ran it to perfection against the Saints in 2009. Here's the look: 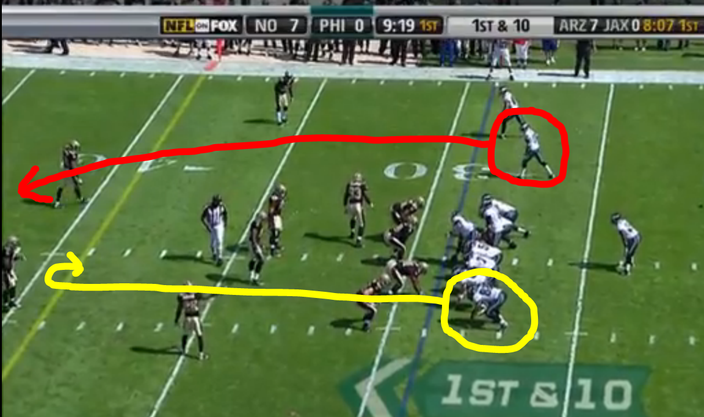 And the result of the play:

Watch #41 bite ever so slightly, and he's toast.

I'm not so sure the Eagles have someone who can make that play work the way DeSean did. Nelson Agholor, maybe? He'd probably be their best hope. But the Eagles showed that look today.

• Jordan Matthews lined up as a running back in a two-point conversion look. He motioned pre-snap and served as a decoy.

• The Eagles showed a couple gadget plays today. They threw a screen lateral to Huff, who then threw to Wendell Smallwood on the other side of the field. They also tried a look in which Agholor caught a lateral then tried to hit Carson Wentz down the opposite sideline. Huff-to-Smallwood was complete, Agholor-to-Wentz was not.

• One area where Chip Kelly was tremendous in his tenure with the Eagles was with special teams. Under Kelly, the Eagles probably got more special teams reps than any team in the NFL, and my bet is that it was by a wide margin. Over the last three years, it could be argued that the Eagles had the best special teams units in the NFL. The Eagles under Doug Pederson aren't getting anywhere near as many special teams reps so far. We'll see if and how that will affect the 2016 Eagles.

• The kickers made all their kicks today. Cody Parkey and Caleb Sturgis were both 3-for-3 from distances of about 27, 32, and 38. Parkey had a near-miss on one as he just kept one inside the right upright on the 33-yarder.

Wentz was up and down today, in my opinion. He had some really nice throws, some throws he'll learn from.

In the "learn from" column, the play design was a fake to the right, then a screen back to the left side. Bryan Braman read it nicely and was able to bat the pass out of the air before it reached the intended target. Those plays can become disasters. It appeared as though Wentz just trusted that it would be open before he turned to throw the screen, and was not expecting Braman to be there.

In the "atta boy" column, he had a gorgeous deep ball down the sideline to Xavier Rush in 7-on-7's. During the more important 11-on-11 phase of practice, he threw a perfectly placed wheel jawn to running back Cedric O'Neal in the back of the end zone. O'Neal tried to one hand it (perhaps unnecessarily) and could not make the play. But the throw was money. On the next play, Wentz hit TE Chris Pantale on the other side of the field for a TD on what looked to be another well-placed ball, although I didn't have as great a view on that one.