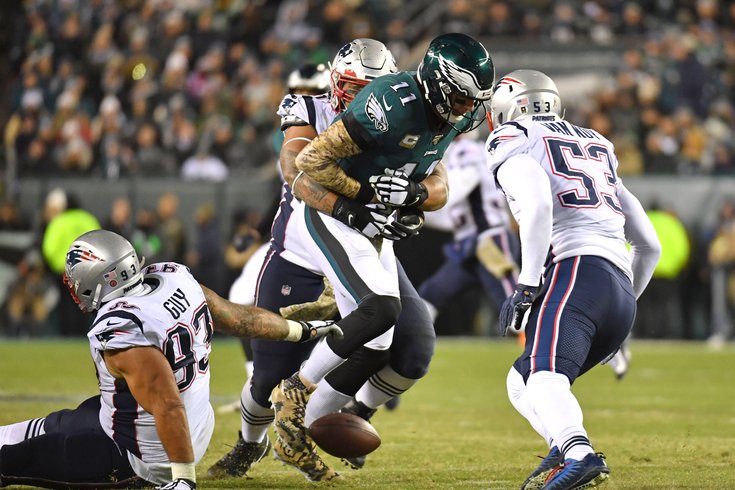 Carson Wentz coughed up a costly fumble against the Patriots Sunday.

The Eagles were leading New England, 10-0, in the first quarter at Lincoln Financial Field and it was loud.

If the 2017 NFC Championship game was the most electric football game in South Philly, their regular season tilt against the Patriots in 2019's Week 11 was shaping up to be No. 2 on the list.

Philly was moving the ball, controlling the clock, pressuring Tom Brady and keeping the Patriots' offense totally in check. And then they reverted to the "norm," committing every Eagles' sin that has tortured fans this season on their way to a 17-10 loss.

Unforced errors like Carson Wentz' fumble and two near misses on a bad snap, and Boston Scott's fumble out of bounds began to cast shadows of doubt and later groans of disgust in a stadium filled with believers.

But the killer came from Nate Gerry. Or it didn't.

The Rex Burkhead scamper set up a Julian Edelman touchdown pass and two-point conversion to cap off 17 unanswered points for the defending Super Bowl champions. Philadelphia answered with a pair of three and outs and the jubilation from 4:45 p.m. had turned into boos by 6:30.

Even after giving up the lead and seeing their offense fall flat, the defense stood strong, forcing a barrage of three and outs and punts with the Birds down just seven points. The Pats' lone touchdown came about four minutes into the third quarter. They wouldn't score again.

"The biggest thing is everybody did their jobs," Fletcher Cox said after the game. "Everyone did their jobs today, but we came up short — there are no excuses. I don't take excuses from anyone else in this locker room. We played a really good football game and came up short."

Unfortunately, the Eagles' anemic offense couldn't make that matter. After showing nothing of note for most of the second half, the team drove it to the New England 30-yard-line late in the fourth quarter. A handful of pretty dreadful Wentz throws hit the turf as the Birds turned it over on downs and the fans headed for the exits.

"We have to be better," Boston Scott, who had seven carries said. "I think we are our own worst enemy. It has a lot more to do with us than what they were doing. There are just something fundamentally we have to clean up. I think we left some meat out there in the run game."

The blown opportunity is even more noteworthy as the Eagles offense was without Jordan Howard and Alshon Jeffery somewhat unexpectedly after having a Week 10 bye. The unit struggled, as they gained just 255 total yards (with 95 of them coming on their sole first-half touchdown drive). The secondary wasn't able to create a turnover, but it did hold Brady to a pretty eye-popping number of incomplete passes with 21, and a completion percentage of just 55%.

Lane Johnson's eventual absence with a concussion was of impact too, with a less-than-sharp Wentz sacked five times. It was hard not to notice Wentz that was far from his best, going just 20-of-40 for 214 yards.

“I left some plays out there, missed some throws," Wentz told the media. "I gotta be better.”

"We got these guys backs 100%," Cox, always an optimistic leader said. "We are not pointing fingers. That's not what the locker rom is about — we are a family."

Somehow, despite all the injuries and the awful play from the offense, the Eagles were in the game the entire way and were pretty darn close to stealing a win from the 9-1 Patriots.

The Eagles' season is far from over despite the loss. With four NFC East games ahead — including one against the Cowboys at home — they still have a pretty good chance of controlling their own fate for a playoff spot. But it's undeniable that stealing a non-conference win against New England (with the 8-2 Seahawks waiting next week) would have really set the Eagles up with Dallas sitting 6-4 and a game ahead.

Instead, their uphill climb continues.