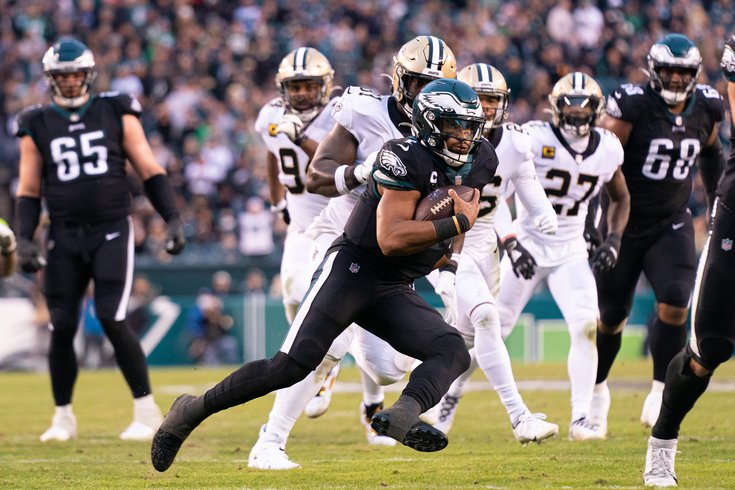 The Eagles now have the No. 1 rushing offense in the NFL.

Here's where people around the country have the Eagles ranked heading into Week 15 of the 2021 regular season. Oh, and here's our version of these sellout rankings, too.

The Eagles are the top rushing team in the NFL (averaging 160 yards per game) but are third worst in passing (196 YPG), which helps explain why they're near middle of the pack. They rank 12th in points per game (25.9) and have been solid overall since coach Nick Sirianni switched to a more ground-based attack in Week 8. The defense has been trending in the right direction, as well, benefitting from the strong play of corner Darius Slay, who has three touchdown returns on the season. The Eagles have limited opponents to 17 points per game over the past four weeks, an encouraging sign as they hit the home stretch, with three of their final four games coming against Washington (20.5 PPG) and the Giants (17.8 PPG). While it's fair to rate the special teams as average, kicker Jake Elliott (22-of-24, 92% success rate) has been lights out.

#JimmySays: Oh hey, yeah look at that. The Eagles are indeed now the No. 1 rushing offense in the NFL.

I wonder how far out in front they'd be of the rest of the league if they identified what their identity should have been when everyone else did back in June.

Gardner Minshew's excellent spot start against the Jets drew national attention, but the story of the Eagles' offensive renaissance continues to trace back to a stellar running attack. Philly has rushed for at least 180 yards in four straight games, the longest such streak by an Eagles team since 1950. It's also the longest streak the NFL has seen since the Lamar Jackson-led Ravens attack of 2018. Jackson's early-career arc is obviously something the Eagles are trying to emulate with Jalen Hurts, another extremely fast and athletic quarterback whose passing abilities could use some refinement. The Eagles' smash-mouth attack should play well in a closing stretch entirely contained within the NFC East.

#JimmySays: Jeff Stoutland isn't given enough credit for his contributions to the Eagles' offense this season. Opposing defenses know the Eagles are going to run it, and they're successful with it anyway.

As a reminder, these morons put their power rankings behind a paywall mid-way through the season.

No specific analysis on the Eagles here, but they were elevated to "the contenders" status last week 😃, only to be demoted back down to "the muddled middle" after their bye 😞.

Whether or not they mount a playoff charge this year – a distinct possibility as they close with four NFC East adversaries – some really nice, unheralded cornerstones here, including TE Dallas Goedert, LT Jordan Mailata and DE Josh Sweat.

#JimmySays: Mailata and Goedert certainly look like players to build around, but I wouldn't call Sweat a cornerstone just yet.

Gardner Minshew is a fun guy — both to play with and write about. And there's no guarantee that Hurts is the Eagles' long-term answer at quarterback. But we have seen more than enough from Minshew over his time in Jacksonville to know that he is what he is — a backup. Let Hurts play out the final month of the season and then decide whether to commit to building the offense around him or looking for a new starter. 2017 isn't repeating itself anyway.

#JimmySays: For some reason, "Gardner Minshew is a fun guy" reminds me of Kramer telling George that he's a fun guy while trying to loosen him up for a photoshoot.

Anyway, yeah, Nick Sirianni's immediate diffusing of who his starter is going forward was a smart move ahead of the bye week.

Of the five 6-7 teams in the NFC, the Eagles have the best odds to make the playoffs according to Football Outsiders at 36.8 percent. No offense to the Eagles, but if they make the postseason it's more proof the NFL shouldn't have expanded the playoff field.

#JimmySays: I mean, yeah, but you also say that about the other 6-7 teams — Washington, Minnesota, Atlanta and New Orleans. None of them are any more deserving of a playoff berth than the Eagles.

They should have Jalen Hurts back this week as they ready to play Washington in a big division game. PS: He is their quarterback, so let's stop the Gardner Minshew mania.