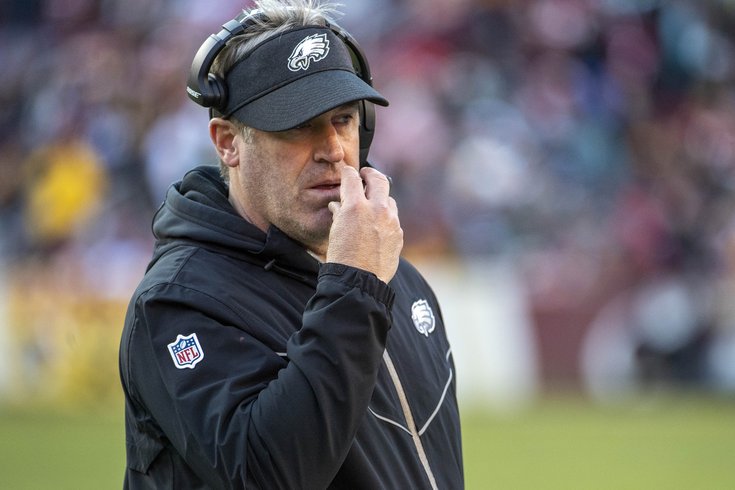 Doug Pederson has done a really good job this season.

Here's where people around the country have the Birds ranked after the 16th week of the 2019 regular season:

Wentz has been lights out over the past three games, completing 71% of his throws for 910 yards with six touchdowns and zero interceptions to rally the Eagles to a December push that has them on the doorstep of capturing the NFC East title. And he has done it with all three of his original starting receivers and primary running back Jordan Howard sidelined with injuries. Wentz was up-and-down for much of the season, but he has recaptured his MVP-like form at the most critical point of the year.

#JimmySays: It's hard to argue with Wentz as the team's MVP.

We're finally seeing what Carson Wentz can do on a (quasi-)playoff stage. The quarterback -- sidelined by injuries to close out each of the past two seasons -- has put a banged-up and undermanned Eagles team on his back in the past three weeks, leading Philly to three straight wins and sole possession of first place in the NFC East with one week to play. Wentz finished 31 of 40 for 319 yards and a touchdown in Sunday's huge 17-9 win over the Cowboys, doing most of his damage without Zach Ertz, his security-blanket tight end, who was limited by a rib injury. Wentz has a Christmas angel in rookie Miles Sanders, who had 156 yards of total offense on Sunday and has emerged as a weekly threat. The Eagles are one win (or Cowboys loss away) from making their third straight postseason appearance. Who would have predicted that a month ago?

#JimmySays: It wasn't that far out of the realm of possibility, really. I think we all understood that Dallas wasn't very good, and when they kept losing along with the Eagles, they kept the Birds alive. Philly was just able to (eventually) capitalize.

It would be fitting for the 2019 NFC East for the Eagles to blow this at the Giants on Sunday, wouldn’t it? And that could happen.

That was a big game the Eagles won on Sunday. One more to go and they'll clinch.

#JimmySays: CBS didn't actually publish their power rankings yet. I just have a Christmas Eve party to get to, so we'll just predict their useless blurb this week.

Update: I wasn't that far off:

Carson Wentz has been on a tear lately and has the Eagles one victory away from the playoffs. It won't be easy this week against the Giants, though.

#JimmySays: With another big game, I think Sanders has a decent argument for Offensive Rookie of the Year honors.

The Eagles fly up the rankings after dominating the Cowboys defensively in their biggest game of the season while also continuing to show more creative offensive pop. Doug Pederson has done another great December coaching job.

#JimmySays: Pederson has gotten some love nationally, but isn't getting enough credit locally, in my opinion.

Carson Wentz was terrific in Sunday’s win over the Cowboys and the Eagles are making it work with unheralded players around Wentz on offense. That will be good enough, most likely, to win the NFC East. It’s unlikely to be good enough during the playoffs.