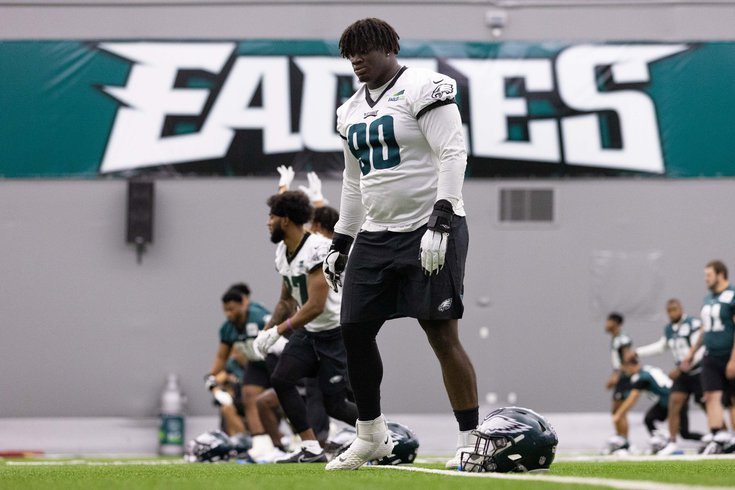 As we do every offseason, we'll be comparing each of the Philadelphia Eagles' rookies to current or former NFL players. We'll start off the series by trying to find a comp for first-round defensive tackle Jordan Davis.

First, who did Davis say he patterned his game after?

Throughout the draft process, we pointed to Davis as this year's "unicorn," or player that is unlike any we've ever seen. He's 6'6, 341, and he runs a 4.78 with a 10'3" broad jump. Go measure yourself in the broad jump if you have a free minute. It's easy enough to do. Have someone hold a measuring tape and let it rip. My guess is that most of you (no offense intended) will fall short of a 341-pounder's jump by two or three feet.

People with Davis' combination of size and athleticism simply don't exist in nature.

In fact, if you look up all the defensive tackles in NFL history who were at least 6'6 and 340 pounds, you'll only find six of them. Here are those six players with links to their spider charts:

If you clicked on any of those (especially anyone other than Branch), those guys were just big bodies who couldn't really move.

And so, finding a comparable player to Davis is quite difficult. The player I landed on is Albert Haynesworth. Of course, we remember Haynesworth for a lot of the wrong reasons, most notably when he stomped on Cowboys center Andre Gurode's face, or perhaps this embarrassing moment against the Eagles:

But for a few seasons with the Titans, Haynesworth was a beast. He was big, strong, and fast, and during the 2007 and 2008 seasons, he had 14.5 sacks in 27 games, earning first-team All-Pro honors both seasons, with second- and fourth-place finishes in NFL Defensive Player of the Year voting.

Again, it's hard to find a great match on that front because nobody in NFL history has Davis' combination of size and athletic testing measurables. But as far as play style goes, when he was at the top of his game, Haynesworth could win either with his brute size or his impressive quickness.

I believe Davis can be a bigger, more athletic, more personable, and much more motivated version of Haynesworth.