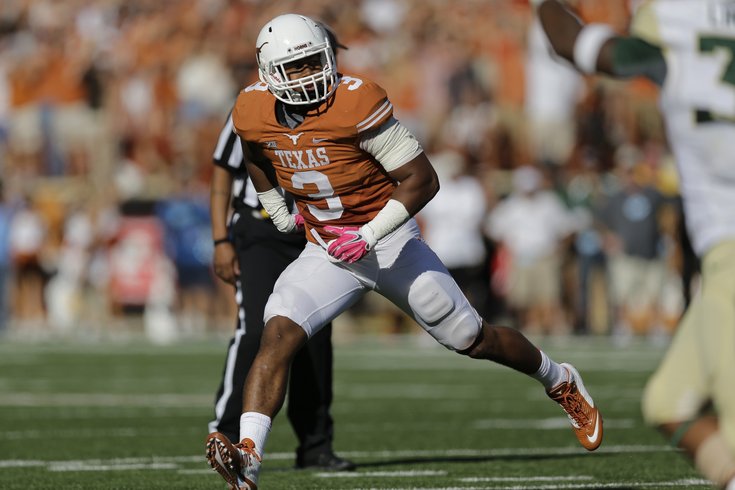 Jordan Hicks has a number of similarities to current Eagles ILB DeMeco Ryans.

During OTAs and minicamp, a number of you asked what players the Eagles' rookies remind me of so far. The Eagles didn't really run enough team drills to really get a great in-person sense of what they'll be as pros. However, I do have some initial thoughts on players comps.

Today, we'll look at third-round pick Jordan Hicks. This may seem a little lazy, but the best player I came up with was current Eagles ILB DeMeco Ryans. I promise I tried to come up with a less familiar name, but Ryans was my favorite comparison of the players I considered. Ryans has since slowed down because of injury issues, but coming out of college at Alabama, Ryans measurables that were very close to Hicks'.

Chip Kelly called Ryans "Mufasa" after he went down with an injury last year, in that Eagles players would rally and play in his honor.

"There's not just one thing that stands out (about Ryans)," said Kelly in a separate interview. "I think his approach to everything; I think he's exactly what you want in a professional in terms of the hours that he puts in here, how important the game is to him, how much he studies just the game of football, how he trains when he's in the weight room, what he's like on the practice field. I think there's a consistency to him that I think separates kind of the great ones from everybody; it’s that he's the same person every single day here.

"He's always a calming influence, he doesn't lose his mind on game day, but there's a calm intensity about him in everything he does. I think we try to get our younger guys to understand that if you want to know what a football player looks like, watch DeMeco and how he handles himself, not only on the field, not only in the training sessions, but 24 hours a day."

Hicks' scouting report (via Lance Zierlein on NFL.com) mirrors many of Ryans' traits. Among his strengths:

Smart and loves the game of football. Scouts say the staff at Texas raves about the way Hicks lifts, prepares for games and takes care of his body. Has football character in spades.

"He'll probably be a coach after he's done with football. He loves it that much."

However, the negatives on Hicks are that he ""plays through a straw, seeing just what is in front of him," and he "rarely free-styles and takes chances." To some degree, I think the same can be said of Ryans. For his nine year career, Ryans has a shockingly low six forced fumbles and six interceptions.

Hicks' "big play" stats in college are just as unimpressive. For his college career, he had just two interceptions, and no forced fumbles. Both players also have a history of serious injuries.

Both Hicks and Ryans are smart, highly respected leaders who basically serve as coaches on the field. They'll make the plays they are supposed to make; just don't expect many splash plays.