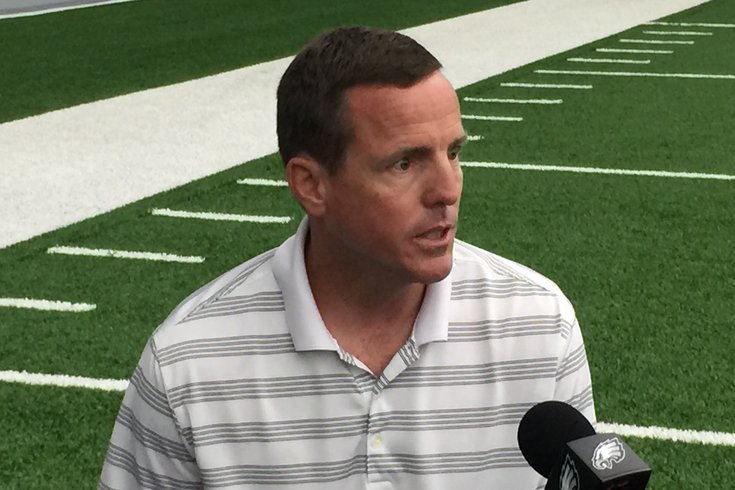 Dave Fipp will not hesitate for a second to rip out your throat.

One of the Philadelphia Eagles' best coaching hires in recent memory has been that of Dave Fipp, who has been the Birds' special teams coordinator from 2013 to the present.

Unfortunately for special teams coordinators, their position has become something of a dead end job at the pro level.

The Baltimore Ravens made an inspired hire when they plucked longtime special teams coordinator John Harbaugh from the Eagles way back in 2008. Harbaugh has since gone 85-59 in the regular season, 15-10 in the playoffs, and won a Super Bowl. Somewhat surprisingly, teams around the league have chosen not to copy the Ravens' approach.

Fipp was clear to note that his focus is on his present job, but he did admit that he has aspirations of being a head coach.

"The biggest thing for us here is taking care of this program, and my job here," he said. "I have my hands full every year, so my focus truly is on the Philadelphia Eagles, and trying to play good special teams.

"I think every assistant coach at some point in his career has dreamed about being a head coach. I would say I fit into that category."

Special teams have a perspective that is different from that of offensive or defensive coordinators, according to Fipp.

"I do think that being a special teams coach in this league – and I’m not speaking about myself, but in general – there are some really quality guys, and I think it is a unique position because you get a chance to see the whole roster," he explained. "You’re not working on the offensive side or the defensive side of the ball. On game day, you’re really involved in a lot of the decisions that the head coach is making – when to punt, when to kick, when to go for it. What are our odds of making this field goal? All those types of things I think are decisions that a head coach makes, I think a special teams coach is naturally really close to that.

"Ultimately, there’s a lot of popularity involved with it, with the fans and whatnot, and making that decision is an outside the box hire, so hopefully over time that will change.”