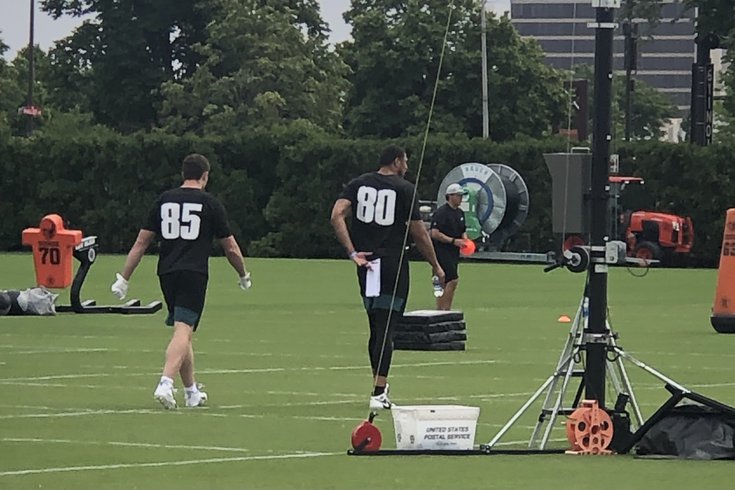 Philadelphia Eagles tight end Tyree Jackson suffered a broken bone in his back during joint practices with the New England Patriots on Tuesday. According to the team, the injury will not require surgery, and his recovery period should be 8-10 weeks.

Jackson injured his back on a throw to the back of the end zone by Joe Flacco. Jackson went way up to make an impressive catch, but he landed with a loud thud directly on his back, and was in obvious pain. He stayed down for a bit, eventually getting off the field under his own power.

Entering training camp, Jackson was thought of as an intriguing developmental player who was transitioning from quarterback to tight end. At 6'7, 249 pounds, Jackson has excellent size for the position, and athleticism to go along it with. However, being new to the position, it was expected that progress would come along slowly.

However, Jackson exceeded expectations, making several nice plays each day throughout camp, while showing surprisingly good hands and continuously improved route running, to the point where he was looking like a lock to make the team.

Now, the Eagles will have a decision to make on Jackson. They can't put him on the PUP (physically unable to perform) list. It's too late for that, as players have to go on PUP before the start of training camp. If the Eagles were to put Jackson on injured reserve before final cutdowns, he would be done for the season. Jackson would remain with the team, but he couldn't practice with them all year.

Because he proved to be such a promising player this summer, the bet here is that Jackson will make the initial 53-man roster anyway, and he'll go on short-term IR thereafter. If the Eagles really feel like they need that roster spot at final cutdowns, one strategy that would make sense would be to cut Richard Rodgers, and then sign him back to the team after Jackson goes on short-term IR.