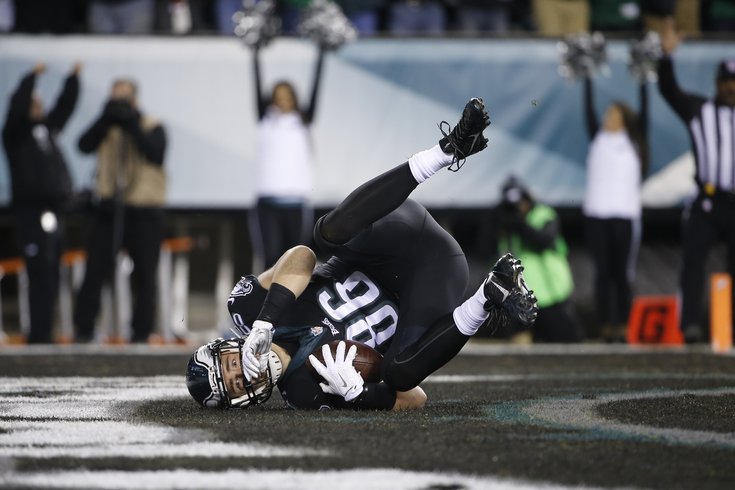 The Eagles went "live" once again (meaning they tackled) for the second time in three days, and they sustained a number of injuries, although they were mostly of the "scare variety," as PhillyVoice's Matt Mullin reported. We'll run down the injuries at the end, but first, the football action:

• The best action of the day occurred near the goal line, in something of a "reverse goal line" drill in which the offense has the ball at their own two yard line and are trying to get out. The highlights of that session:

• The two standouts during 1-on-1 pass protection drills were undrafted rookie LB Myke Tavarres and TE Chris Pantale, but for different reasons. Tavarres beat his man soundly on multiple occasions, while Pantale couldn't block anyone. Pantale was then owned worse in running drills by Means and Goode. Coming out of OTAs and minicamp, Pantale looked good and seemed like a lock to make the team based on Doug Pederson's complimentary words during press conferences. In camp, he's been bad. In addition to the poor blocks today, for the second day in a row he had a drop that nearly resulted in an interception. I don't see the appeal, like, at all. He's not one of the 53 best players on the team, and in my view, he's not really even all that close. We have some kicker action to report:

• We haven't mentioned Fletcher Cox much, and there's a reason. Two years ago, Cox had a very "meh" camp, in which he didn't really make many plays at all. Turns out he was probably just kind of going half-speed, because that was the year he really broke out and became a stud interior defender. I won't be making that mistake again. This year, it appears that Cox kind of picks and chooses when he's going to go 100%, and when he does, he's dominant. In a live session today, Cox penetrated through the line, blowing up a run play four yards deep in the backfield.

• I've been impressed by CB Ron Brooks as a tackler. He'll stick his nose in there.

• Denzel Rice had a good day. On one of the plays the QB was sacked during the goal line drill, they still played out the rep, and Rice picked it off. He also had a nice pass breakup covering Paul Turner down the sideline.

• The Eagles have run a lot of three-TE sets this camp, which makes sense, seeing as they have three talented tight ends. We'll have more on that soon.

• Tomorrow's practice will be a 10/10/10 session. I'll save you the boring explanation on that and just say that there will be less action.