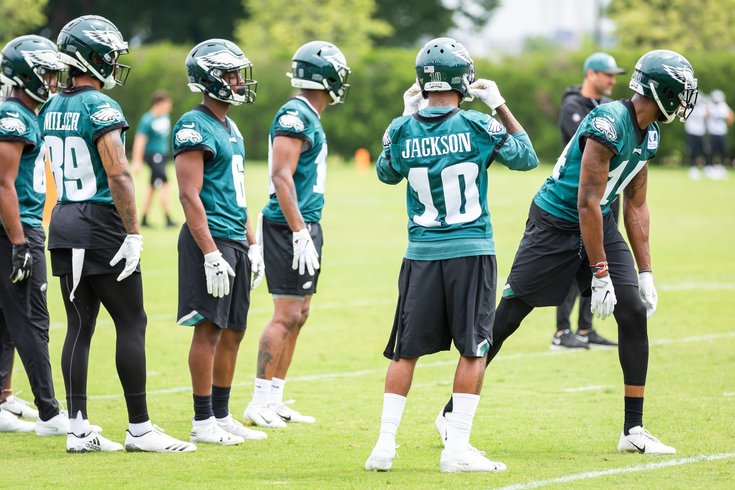 DeSean, and a bunch of other guys.

Leading up to training camp, we'll take a look at every player on the Philadelphia Eagles' roster, and how they fit with the team. On Monday, we started with the quarterbacks. On Tuesday, we continued on with the running backs. Today, we'll look at the wide receivers.

In his second year in Philly in 2018, Jeffery had a nice season as the team's "No. 1 receiver," making 65 catches for 843 yards (13.0 YPC) and 6 TDS, despite missing the first three games of the regular season while continuing to recover from offseason shoulder surgery.

While a good player in his first two seasons in Philly, Jeffery may have to take his game to another level this season to see that money, as the Eagles drafted a potential replacement with a similar skill set in J.J. Arcega-Whiteside in the second round of the 2019 NFL Draft.

In case you didn't read any reports from spring practices, one of the more obvious takeaways was that Jackson is still very fast, and he has quickly developed rapport with Wentz.

Jackson's speed, at a minimum, will keep opposing defenses honest, as they will have to respect his ability to take the top off the defense, something the Eagles were not a threat to do in 2018. Jackson's mere presence should open up all kinds of opportunities for Jeffery, Zach Ertz, Dallas Goedert, and Nelson Agholor to flourish in the intermediate areas of the field. By the same logic, Jackson should also help boost the run game.

And sure, when he makes big, game-changing plays of his own down the field, those will be helpful too.

After two wretched seasons to begin his career after the Eagles made him a first-round pick in 2015, Agholor moved into the slot and began to thrive. Over the last two seasons, he has been among the best slot receivers in the NFL*, catching 126 passes for 1504 yards and 12 TDs. How does that rank when compared with other slot receivers around the league during that span? Using Ourlads' depth charts, I took a look:

He's fifth in yards, second in TDs, and fourth in receptions. To note, three players ahead of him in yards (Landry, Shepard, and Lockett) are clearly their respective teams' No. 2 receivers. Of the dedicated slot receivers behind him, only Kupp is clearly a better player than Agholor at the present stages of their careers. (I might include Edelman and Boyd here as well, if they weren't their teams' clear No. 1 or No. 2 receiver.)

The Eagles would have been happy to trade Agholor this offseason had the right offer come around, seeing as he's (a) pricey in 2019 playing on his fifth-year option at $9,387,000, and (b) scheduled to become an unrestricted free agent in 2020. That never happened, so here he is.

Is Agholor costly for what he offers? There's certainly an argument for that. However, with Agholor, the Eagles will have a very good trio of receivers in their 11 personnel grouping, to go along with a two-tight end package with Zach Ertz and Dallas Goedert. Doug Pederson could get really creative cycling back and forth between those two sets, mixing run and pass, and keeping opposing defenses off balance, and Agholor will be a key component in being able to do that.

Argeca-Whiteside had a great spring camp, catching passes both in volume and quality. Where he stood out, as expected to some degree, was in the red zone, where his reputation for making contested catches in college has carried over so far into the pros. Arcega-Whiteside and Wentz have already begun to build chemistry, and have been working toward getting their timing down on back-shoulder throws. He has established himself as the No. 4 receiver already, putting distance between himself and the rest of the receivers below.

At some point, it's likely that an Eagles receiver will miss some time, and I believe Arcega-Whiteside will be able to step in as a rookie and contribute.

Hollins showed promise as a rookie in 2017, but his career stalled when he missed the entirety of the 2018 season with a groin injury. He missed a portion of spring camp with the same injury, but eventually did practice.

With Arcega-Whiteside on board, Hollins is no longer the No. 4 receiver. He'll have to re-build his value to the team, beginning with special teams, and making the most of his opportunities as a receiver when he gets them. I do still think Hollins will have a roster spot in 2019.

The Eagles drafted Gibson as something of developmental player, but after a couple seasons in which he has been unable to get on the field in the regular offense as a receiver, his time as a project is running out. On the bright side, he has at least carved out a role as the gunner on the punt team, but he'll need to take some kind of step forward as a receiver to prove he belongs on the roster.

Ward made some noise during 2017 Eagles training camp in a slot receiver role, but he fell short of making the roster. He's been on and off the practice squad each of the last two years. This offseason, Ward played for the San Antonio Commanders of the now defunct AAF, where he had 22 catches for 214 yards and 0 TDs. He also had a punt return TD.

Johnson also came from the AAF, playing for the Orlando Apollos after bouncing around the NFL since 2013. He led the AAF in receptions (45), yards (687), and was second in TDs (5). Johnson made some plays in spring practices, but he's at a disadvantage in terms of making the roster because he's 30 years old.

There's usually one unknown receiver who manages to stand out in spring practices. This year that guy was Marken Michel, who happens to be Patriots RB Sony Michel's brother. Michel caught passes at every level of the field and flashed enough ability after the catch that special teams coordinator Dave Fipp mentioned Michel as a player who he wants to see get some punt return opportunities.

The question for guys like Michel is whether or not they can consistently sustain their promising play through training camp and into the preseason games. We'll see.

Miller was a big name in college, and an impressive athlete that the Eagles picked up for their practice squad last season, but he did not stand out in any way during spring practices.

Thompkins is an undrafted rookie free agent who was a good punt returner at Penn State. He has not yet stood out, and had a number of muffed punts during warmups during the spring.

Agudosi is a 6'6, 220-pound receiver who had a highlight reel catch over Rasul Douglas and Avonte Maddox (I think?) deep down the field one day in spring practices. He's going to be a popular player among the fans when they see his size in the preseason games. More consistency is needed for him to have any kind of chance to make the roster.

This is a really good group, with a varied set of skills. I think there's a strong argument to be made that the Eagles' trio of Jeffery, Jackson, and Agholor are top 10 in the NFL, and they now also have some depth to go along with that group. The Eagles wide receiver corps have come a long way since they were probably the worst in the NFL in 2016.