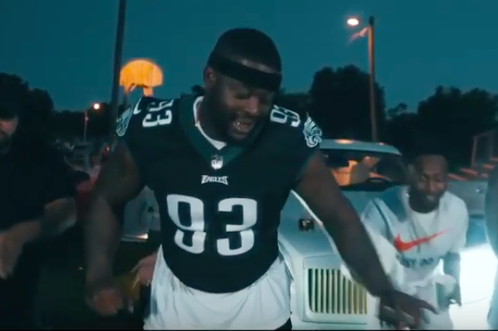 We've now got a chance to listen to what he's got.

RELATED: Which current Eagles are on pace to make it into the Hall of Fame?

Good Boyz has released six music videos in the last two months, including one for a song called "Come Thru," where Jernigan raps in his Eagles jersey under the moniker Stud Muffin.

There's a lyric referencing former Eagles kicker David Akers, who until now was probably the least likely Eagle to ever end up in a rap. (Note: Video contains explicit lyrics).

“Like my name David Akers or I play rugby," Stud Muffin seems to say. What is that supposed to mean? I don't know. As long as he's not getting pancaked, it doesn't really matter.

Jernigan returned to the Eagles this offseason on a one-year, $1.25 million deal after the team declined to pick up his $13 million option for 2019. He missed 13 games last season as a result of a non-football back injury whose cause remains a mystery.

Does David Akers know anything about this? Maybe, maybe not. He seems to be paying more attention to special teams.

Congrats to @jake_elliott22. Blessings to ya both. Love it. https://t.co/oNSQ0gSpa1

[h/t to Mike Gregor of heavy.com, who first posted about Jernigan's new single over the weekend.]