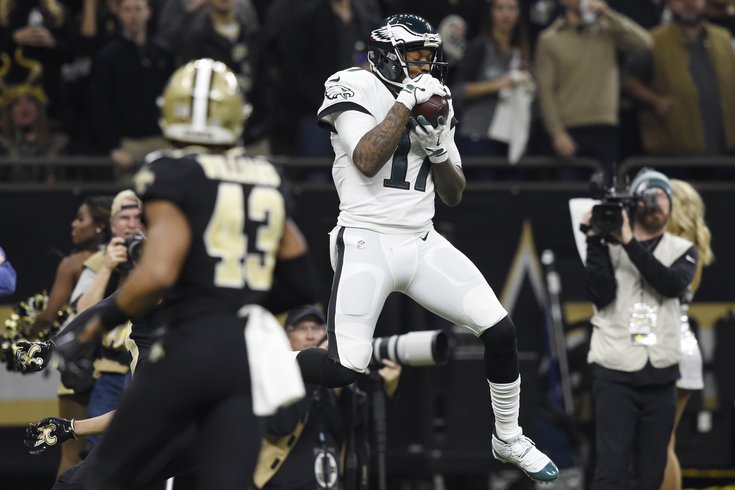 Alshon Jeffery led the Eagles with five drops, which really isn't all that bad.

In 2015 and 2016, one of the biggest issues for the Philadelphia Eagles' lack of success was the play of the wide receivers, specifically, their penchant for dropping catchable passes. They corrected that issue somewhat in the Super Bowl season in 2017, but they still had plenty of room for improvement.

For some reason, as heavily as the NFL is covered from a statistical metric standpoint, there are no reliable sources for drops. While drops are subjective to some degree, the following is a representation of the number of drops by each Eagles player in 2018.

The following players with at least one reception had no drops:

The biggest offender, from a total number of drops standpoint, was Alshon Jeffery, with five. Jeffery, of course, playing through broken ribs, also dropped a pass that effectively put the final nail in the coffin on the Eagles' season.

(That drop is not counted in his total tally.)

Still, Jeffery's drop rate of 7.1%, while not ideal, is far from awful. The Eagles' biggest drop rate offenders in previous seasons had far worse drop rates, as noted below (minimum 35 catches):

The players deserving of praise for catching the football in 2018 are Zach Ertz, Dallas Goedert, and Nelson Agholor.

It's also worth noting that earlier this offseason, we posted video of all of DeSean Jackson's targets in 2018. Within the analysis of that piece, I wrote that I would ding him for two drops. Because he had 41 catches, his drop rate would be 4.7% in 2018, which is very good for an outside receiver.

On the negative side, Corey Clement and Jay Ajayi excluded, the Eagles' running backs did a terrible job of catching the football, with Wendell Smallwood's third down drop in the red zone against the Vikings serving as the most costly. Jordan Howard and Miles Sanders have a low bar to clear in improving the Eagles' passing attack from the running back position.

Overall, a drop rate of 6.4 percent is good (though still not great), and their trend of improving in that area bodes well for 2019.

*We updated a previous version of this story that said Goedert had no drops. He did have one that we missed initially.