When the Philadelphia Eagles take on the Dallas Cowboys this Sunday night, they'll be facing a opponent they know very well, and one that knows them. Here are five matchups to watch:

As we noted in our Cowboys dumpster fire piece way back in June, Ezekiel Elliott is kind of a jackass, and he along with the Cowboys would eventually pay for it. Well, that has already happened, as Elliott began serving his six-game suspension last week against the Atlanta Falcons. In that game, the Cowboys' offense looked nothing like it normally does when it has Zeke.

Without Elliott last Sunday, the Cowboys quickly abandoned the run, as backup Alfred Morris had just 11 carries on the day. By comparison, over the previous four games, Elliott was averaging just under 29 carries per game. Running the ball with Elliott was the Cowboys' bread and butter offensively, and without him, the entire dynamic of their offense changed.

The Cowboys' offensive line is an excellent run-blocking unit, but they can be exposed in pass protection when the run game isn't working. Last Sunday was an extreme example of that, as backup LT Chaz Green, filling in for All-Pro Tyron Smith, couldn't block my mother, who just had knee replacement surgery, much less an NFL defensive end. 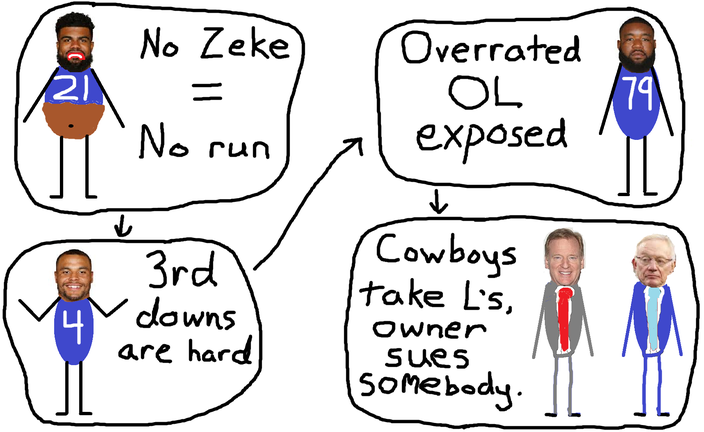 The Eagles have done an outstanding job making opposing offenses one-dimensional all season long, and it is imperative that they do the same to the Cowboys Sunday night.

2) The Eagles' pass rush vs. the Cowboys' offensive line

On Tuesday, I wrote about 700 words on the Cowboys' offensive line, and how they are susceptible to pass rushers when the run game isn't working. Just go read that, please. Anyway, the point here is that if the Eagles are indeed able to slow the Cowboys' rushing attack, they must find a way to get after Dak Prescott, and preferably, keep him in the pocket.

Jim Schwartz had high praise for Prescott's ability to throw on the run.

Prescott is also a threat as a runner. The Eagles don't seem to mind running quarterbacks much as long as they are punishing them whenever they try to run.

3) The Eagles' secondary vs. the Cowboys' wide receivers and tight ends

Dez Bryant is far from the dominant wide receiver he once was, as he has averaged just 54 receiving yards per game since 2015. However, what the Cowboys have is a variety of receivers with varying skill sets who can beat opposing defenses as a group.

"They have an outstanding group," said Schwartz. "They have a Hall-of-Fame tight end, big play wide receiver. They've added some other wide receivers. They can all make plays. Quarterback can threaten every single one. They really don't have a favorite receiver or one guy they're going to all the time, even though they certainly want to get the ball to Dez Bryant."

In years past, the Cowboys have found ways to take advantage of weak Eagles cornerbacks. This year, the Eagles have gotten surprisingly good play from Jalen Mills, Patrick Robinson, and Rasul Douglas. They'll also likely be getting Ronald Darby back out on the field Sunday night.

This is not the obvious matchup advantage in the Cowboys' favor that it once was.

So far, Lane Johnson has faced Ryan Kerrigan twice, Justin Houston, Jason Pierre-Paul, Joey Bosa, Elvis Dumervil, and Von Miller. Demarcus Lawrence has 11.5 sacks this season, and is just the next in line of very good edge rushers for Johnson to handle.

"He looks good," said Johnson. "He looks stronger than in previous years. He's long. He uses his leverage well. He's not as fast as Von Miller, but he's really strong on the edge."

5) The Eagles' running game vs. the Sean Lee-less Cowboys' linebackers

As we wrote on Monday, Sean Lee is expected to miss this game with his yearly hamstring injury. That will be a huge loss.

In the last two Dallas wins over Philly, Lee has had great games. In the only game that mattered between the Eagles and Cowboys last season, Lee had 11 tackles and two tackles for loss. He also had perhaps the play of the night, when he tackled Darren Sproles for a six-yard loss after an ill-advised swing pass that knocked the Eagles out of field goal range.

Normally, when Eagles coaches are asked about an opposing injured player, they'll say they're going to prepare for him as though they expect him to play. On Tuesday, Frank Reich did no such thing when asked about Lee.

"He means a lot," Reich said. "I mean, that guy is an amazing player. His instincts, his knack to get to the football is second to none. I mean, second to none. That guy, you watch him on tape, and he is an impressive, impressive football player. So it's a big loss for them, there is no question. But this is the NFL. We've lost some good players as well, and I'm sure they've got the same mentality that we have, next man up. He's their leader and all that stuff and their quarterback on defense. I'm sure they've got that next man up. But what a great player he is."

With Lee out, the Cowboys are going to have to get more of a positive contribution from second year linebacker Jaylon Smith. If you have a Cowboys fan friend, surely he or she has told you about how Smith is going to be the next Derrick Brooks, seeing as he likely would have been a top five pick had he not shredded his knee in his final college game.

When the Cowboys selected Smith in the second round of the 2016 NFL Draft, they did so knowing that he wasn't going to play in 2016. That is fine in terms of investing in the future on a player with a regular old ACL tear or ruptured Achilles. Unfortunately, Smith had nerve damage, which is a far more serious an issue, and nobody really knew whether (or when) his nerves would begin firing again.

Smith made slow progress, and eventually got on the field this past offseason, garnering a lot of hype in training camp from his teammates and the Dallas media. Your Cowboys fan friend was surely certain that Smith was a steal for the Cowboys in 2017 and beyond.

As it turns out, Smith has been terrible so far this season, particularly against the run. Expect the Eagles to try to establish the run early and often on Sunday night, with the hopes of opening up opportunities down the field for Carson Wentz, who, oh by the way, has come a long way since he last faced the Cowboys.