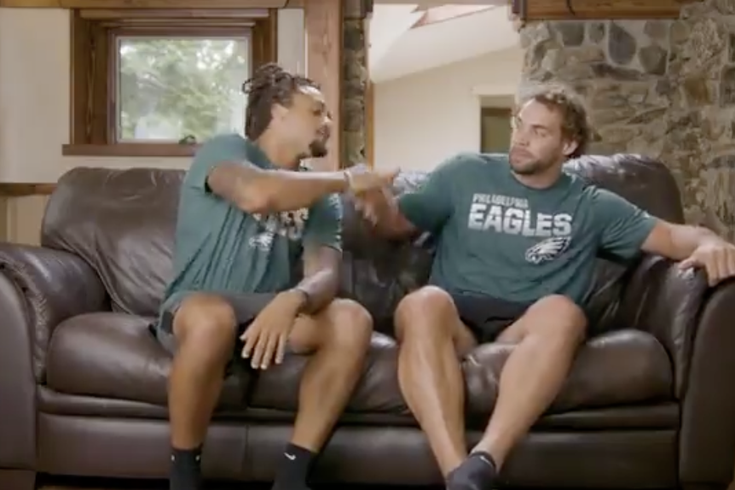 Goldfish brought together Sixers star Tobias Harris and former teammate Boban Marjanovich for a series of silly commercials and Wawa evidently saw a formula for success.

Goedert, who rooms with Maddox, shared the commercial on Twitter.

Just another day in the life with @2live_am and @wawa during our fantasy draft pic.twitter.com/lItSqaRVF4

There are some nice touches in there, from the sound effects to the jet skis, which were pretty superfluous, but must have been one of the main draws to get these guys on board, money aside.

The best part of this commercial may be the total sincerity in Maddox's voice when he asks Goedert if he wants some mac 'n' cheese with his turkey hoagie. And then Goedert won't hear of it unless there's enough for "the guys," who are coming over for a fantasy football draft.

Goedert and Maddox were the stars of the Eagles' "All or Nothing" Amazon Prime series on the 2019 season, offering comedic relief with their shenanigans at home. It's no surprise their friendship on screen turned into an opportunity elsewhere.

As for fantasy football, the Eagles again look to be a tricky team to forecast in terms of production. Does Zach Ertz seemingly sticking around tank Goedert's high-end upside? Do the pass catching abilities of Kenny Gainwell and Boston Scott put a discouraging limit on Miles Sanders' ceiling? Will Jalen Hurts' completion percentage climb enough to make Eagles wide receivers viable breakout candidates or players with safe floors as third and fourth options?

If you're a fantasy homer who likes to take at least one Eagles player somewhere in the draft, who's your guy?