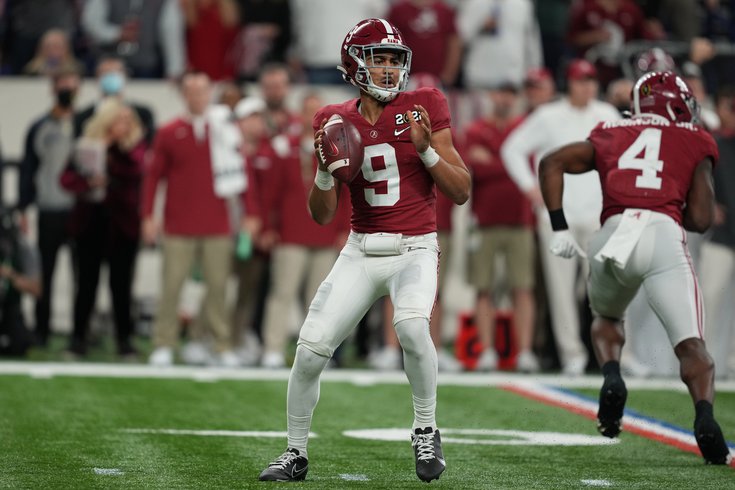 When the Philadelphia Eagles traded one of their three first-round picks for future draft ammo, notably an extra first-round pick in the 2023 NFL Draft, they probably revealed that they didn't think much of the 2022 quarterback class.

If Jalen Hurts doesn't make a substantial leap in 2022, the Eagles will very likely be a player in the 2023 quarterback draft class, which is expected to be deeper and more talented.

"If you don’t have conviction on one of these quarterbacks [in the 2022 draft], I think you put up the banner for sale and you try to do what it seemed like Howie Roseman did, where he traded back and picked up an additional first-round pick in 2023," former NFL general manager Mark Dominik said in a conference call for Sirius XM radio. "He did that last year in case Jalen Hurts wasn’t what he wanted, and he did it again, so now if he needs to get a quarterback he has the ammunition to go get one."

Researching future quarterback classes can be difficult because so much can change from year-to-year. This time last year, Spencer Rattler, then of Oklahoma, was being projected as a possible top 10 pick, while Kenny Pickett was being thought of as a fourth rounder. Rattler had a disastrous season and transferred to South Carolina, while Pickett is highly likely to be a first-round pick. It's not uncommon for quarterbacks to drastically rise and fall, with Joe Burrow serving as the most extreme recent example.

The Eagles do indeed attempt to research future quarterback classes, and in fact, during the 2016 offseason, they felt that the 2017 quarterback class was going to be weak, which helped guide their decision to trade up for Carson Wentz.

"When we went and researched and saw what the quarterback classes are going to look like going forward, next year, two years out, that's a daunting proposition," said Howie Roseman in April of 2016. "A lot of things change. There's no question. What we see now (the 2016 quarterback class) is probably not what we see a year from now or two years from now."

As it turned out, the 2017 draft produced Patrick Mahomes and Deshaun Watson, although heading into that draft, none of the available quarterbacks were thought of as slam dunk prospects. For example, Watson was the highest-rated quarterback prospect on NFL Network's Daniel Jeremiah's board, at 28, while Mahomes didn't even make his top 50.

Looking ahead to 2023, if indeed the Eagles are interested in quarterbacks, they will have competition as there are four additional teams — the Lions, Texans, Seahawks, and Dolphins — with multiple first-round picks. All four of those teams could be shopping for quarterbacks in 2022 or 2023 as well.

So who are the top quarterback prospects in the likely 2023 quarterback class? Anyone who follows college football or the NFL Draft closely knows that Alabama's Bryce Young and Ohio State's C.J. Stroud are the top two quarterbacks, for now. But could there be other first-rounders beyond those two guys?

"Phil Jurkovec from Boston College, I think he’s a guy who has a chance to pop next year and continue to rise up on people’s boards," Dominik said. "I wouldn’t be surprised if he makes a big move. Anthony Richardson at Florida is a guy who I think will continue to move up the boards. You’re going to hear more about him. Even maybe Jeff Sims at Georgia Tech, watching what he does next year will be very interesting. And certainly Will Levis is the other one, from Kentucky.

"So when you’re thinking about next year’s class, I think four or five of those guys have a pretty good shot. Certainly three of them are easy first rounders, where we could be talking about them in the top five, whereas this year it’s so different."

A snapshot of each player Dominik named:

• Bryce Young, Alabama (6'0, 194): Young is small, listed (generously, maybe) at 6'0, but he's smart and he has a strong, accurate arm. He can pick defenses apart by just taking what's there or make off-schedule plays when his protection breaks down. He won the Heisman after throwing for 47 TDs vs. 7 INTs in 2021.

• C.J. Stroud, Ohio State (6'3, 218): Stroud put up incredible passing numbers in 2021, completing 71.9 percent of his passes on 10.1 yards per attempt, to go along with 44 TDs vs. 6 INTs in his first season as a starter. Big arm, good anticipation thrower, and pocket presence. He is not the runner that some of the other quarterbacks on this list are.

• Phil Jurkovec, Boston College (6'5, 214): Jurkovec is a tall pocket passer (but not a statue either) who had his 2021 season cut short due to a wrist injury. He can make tight window throws and has been lauded for his willingness to hang in the pocket and throw under pressure.

• Anthony Richardson, Florida (6'4, 237): Richardson only has 66 career passing attempts, so he's pure projection at this point, but he has size, a big arm, and he's a major threat with his legs. In Florida's first two games in 2021, Richardson rushed 11 times for 175 yards and 2 TDs as a backup.

• Jeff Sims, Georgia Tech (6'3, 210): Sims is the least well-known player on this list, and his stats (career 57.1% completion percentage, 25-20 TD-INT ratio) aren't great. He's a dual-threat quarterback with a good arm, but more potential than production at this point. He could be a Zach Wilson-like riser, potentially.

• Will Levis, Kentucky (6'3, 232): Levis transferred from Penn State to Kentucky after (wrongly, perhaps) having to sit in favor of Sean Clifford. Levis is big, mobile, and he has a strong arm. All the physical tools are there. In one season as the starter at Kentucky, he threw for 24 TDs vs. 13 INTs, and ran for 9 TDs.