Earth to Christine Flowers: Bill Cosby is NOT Cliff Huxtable

I’ve never been one for inter-media skirmishes. Having worked full-time at six outlets in the region over the past two decades, it’s become obvious that each has its own way of doing business.

The alt-weeklies were different than WHYY and the Press of Atlantic City is not the same as PhillyVoice, after all, so an apples/oranges philosophy has become a live-and-let-report approach (for the most part).

Still, we all have blind spots, and mine’s a freelance columnist who rarely rises above the “hack” line.

It started back in 2006, when I wrote a column for the Philadelphia City Paper about the district attorney’s grand-jury report into clergy abuse.

The details were abhorrent, and such that anybody with a shred of dignity would recoil in horror. But lo and behold, we received a letter to the editor chastising me as a “sycophantic mouthpiece for the so-called progressive secularlists.”

What the reader failed to realize was that the details were hardly fiction, as she somehow came to believe they were, but that they were taken directly from that grand jury report.

The letter writer’s name was Christine Flowers and although the City Paper has since ceased publication, the record of that exchange remains online for all the world to see.

For a while now, Flowers has been a columnist for the Daily News. Over the years, her work has elicited the same reaction: I wouldn't accept this garbage from a high-school intern.

That’s not to say dreck in a partisan sense. There are many media personalities from the other side of the so-called aisle that I respect. Rather, it’s just horrible take after horrible take, and poorly written prose at that.

Last month, my dismissiveness of Flowers’ writing abilities surfaced again with a column she wrote about Larry Krasner winning the Democratic primary for district attorney.

I read it, commented about it on Twitter and – lo and behold, again – Flowers decided to fire back with the following claims:

Since I mistook the Greek prophet Cassandra for a Greek goddess, I must have been “home schooled” because I couldn’t “afford a good Catholic school education,” per a Facebook post.

That people critical of her column had made “threats against (her) nephew” and that while she “can deal with the misspelled screeds from Brian Hickey and his band of flying Wizard of Oz monkeys attacking me … when they go after my family, they better be prepared for the consequences. Sarah Palin shoots moose. Sarah’s so-called twin doesn’t stop hunting four legged animals.”

Don't believe me? Well, I screen grabbed it: 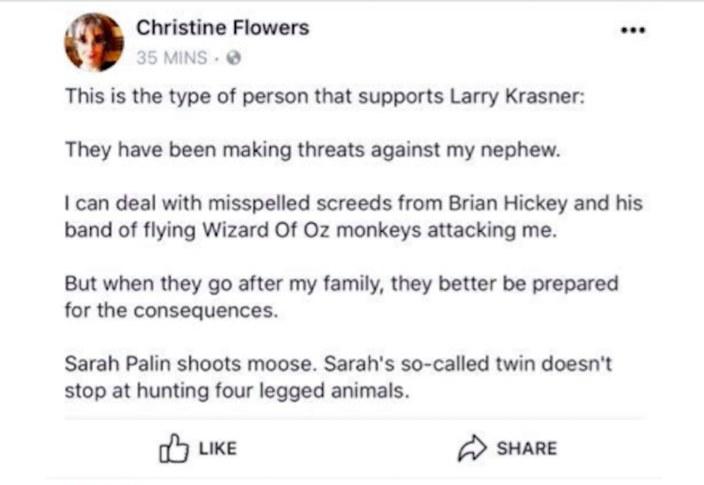 Suffice it to say, I was taken aback.

This, because I spell pretty well (for the most part), didn’t threaten her or her nephew (and offered to shout down anybody who did, but she didn't offer names or evidence), don’t control social-media users’ responses to her dreck and don’t take kindly to what could be considered death threats.

While I thanked her for deleting the post, Flowers did some sort of song and dance about pretending one another don’t exist or else we’d end up in court. Lady, please.

Then, like a snowflake melting in the social-media sun, she blocked me on Twitter. Which was a blessing.

Well, that détente lasted all of 25 days, because Flowers’ grip on the “Philly’s biggest hack” title went national today.

Under the headline “Cosby taking the hit for men who’ve wronged women,” she crafted the brand of scorchingly hot take that grabbed attention from – in no particular order – Esquire’s Charles P. Pierce, Atrios, Will Bunch and Mike Newall (last two from the same company, no less!) and Deadspin.

This take is evaporating water molecules all over the Andromeda galaxy.https://t.co/u9lXdAdh3l

i see the twitter has become acquainted with America's Worst Columnist (yes, including everybody at the federalist), Christine Flowers

On cue, here's Christine Flowers with the worst take on Cosby ever written https://t.co/aff6ij7MgN

The common thread of these – and a litany of social-media reactions – is, simply put, Flowers is a rape apologist because she is a Bill Cosby fan. Don’t believe me? Let’s take a look at a couple excerpts from the “column,” shall we?

“If I had my way, we’d never come to verdict on this case. The greatest damage has already been done, and that is the shattering of beloved myths and comforting relationships by the proxy of television and nostalgia.”

“Yes, he is an adulterer who admitted to giving women drugs for sex. He has confessed in a secular confessional to betraying the trust of his wife, and perhaps of the women who considered him a mentor before he moved them to another spot on the sliding scale of human interaction.”

Uh, apologizing to your wife in no way makes the women you drugged more whole.

“I am allowed to refuse to believe that it includes rape. I am entitled, at least while this jury is out and well beyond, to craft a different narrative from the bits and pieces of complaints and testimony of women who waited years — decades — to come out of their own self-imposed shadows and say 'me too, listen to me, too.' "

I want to believe in the Tooth Fairy, but it’s pretty clear such a creature doesn’t exist.

“Bill Cosby is an easy target, able to stand in for all the men who might have mistreated us in a distant past, and a cautionary tale to those college frat boys who might take advantage when we lie supine and drunk on the floor in the future.”

I will scale this mountain to protect men who treat women poorly because – well, the f*** if I know.

“It’s as if the tidal wave of feminist history is set to engulf that one man as some kind of vindication for all the women who’ve been wronged.”

Let me get this straight: People want Bill Cosby to be convicted of rape not because they think he’s guilty, but to push back against the men of the world? Are you freakin' insane? (Wait, don't answer that. I think I already know the answer.)

“I will be called a slut shamer, a cruel skeptic, the reason that rape victims hide their shame in silence.”

As well Flowers should be.

She’s the type of “writer” who thinks she’s being contrarian when she dismisses logic and vomits up strawman arguments that appeal to a journalistic base that just licks the puke up off the page to show them libtards who's boss.

Sure, I can jive with the whole “political correctness has run amok” argument up to a point. But when you sit down at a keyboard, and type drivel that dismisses the experiences of WOMEN WHO WERE DRUGGED AND POTENTIALLY RAPED, you become a dangerous stain on society. This remains the case regardless of what the jury decides in Norristown.

Flowers is telling crime victims they don’t matter as much as her precious nostalgia.

I have to question how this garbage appeared in print in the first place. If her editors have any sense, they’d cut her a severance check and tell them her services are no longer needed.

In a decent world, columns like the one produced by Christine Flowers wouldn’t grace the pages the city’s so-called most-essential news-gathering organization. They wouldn't even grace a down-and-disgusting subreddit, for God's sake.

If Flowers doesn't get fired because of this, that big news operation near the old Gallery merely looks like a place that's protecting a subpar hack for whatever reason it thinks it's obligated to, because it sure isn't about giving the conservative viewpoint a fair airing. If that's what they wanted to do, they'd have found a replacement that knows how to construct cogent sentences long ago.

The fact that so many decent staffers have gotten laid off while Flowers still gets paid is nothing short of tragic, but anybody within those walls who doesn’t stand up to be heard is just as bad as a Rosary-clutching immigration lawyer who pretends to be a writer.