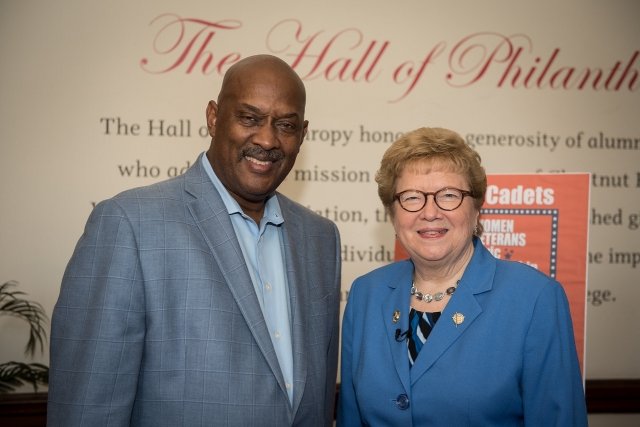 On Saturday the rotunda in St. Joseph Hall overflowed with women veterans, active service members, and the words of a number of elected officials, including those of two presidential candidates, for an event dedicated to assisting and empowering female service members.

The event, held on Sept. 28 at Chestnut Hill College and titled “Stand Up, Be Counted,” launched Women Veterans ROCK’s Civic Engagement Institute, a series aimed at guiding women veterans toward roles of leadership in their communities and careers. The afternoon featured multiple special guest speakers delivering remarks both in person and via video in support of women veterans and active service members. Following the remarks, there were two panels, “Census 2020” and “Women Veterans Countdown to 2020 Town Hall.”

“I really wish I could be there to join all of you, but I want to say thank you to all the women veterans who are gathered there today for your service to our country,” Gabbard said, adding that “the support from fellow veterans, I know, is so empowering.”

South Bend, Indiana, Mayor Pete Buttigieg, a Democratic presidential candidate and former U.S. Naval Reserve officer, offered words of encouragement in a taped recording and thanked veterans for “continuing to serve when out of uniform.”

“I don’t have to tell this group that leaving active duty and returning to civic life can be a challenge,” Buttigieg said. “Veterans need to be seen not as a problem to be solved, but as talent to be competed over, especially when women veterans are the fastest growing group of entrepreneurs.”

Speaking of hosting the event at the College, State Sen. Art Haywood said that “Chestnut Hill College has a long tradition of women building leadership.” That it has collaborated over the years with Women Veterans ROCK on events supporting women veterans and military families is, he said, “tremendous.”

“Women bring the uniqueness of leadership and the ability of collaboration,” Evans said. “These women veterans should be honored for all they’ve built for the military and also for our society.”

While discussing Pennsylvania’s plans to assist women, State Rep. Mary Jo Daley outlined a new organization that she is a part of, “Emerge Pennsylvania,” that trains and supports Democratic women who are running for office throughout the state. Experienced politicians serve as trainers and guest speakers and work with members of the program to develop such skills as public speaking, media relations, endorsements, and fundraising.

Also delivering remarks was Philadelphia Councilperson David Oh, who said women veterans “have suffered and served and put themselves in harm’s way.”

Then, Oh directly addressed service members in the crowd: “You know you have something inside, a level of pride, that you have put it all on the line for democracy’s sake.”

The organization that hosted the event, Women Veterans ROCK, is a coalition of 200 women veteran organizations and advocacy groups with a membership of more than 25,000. It supports women veterans and military families by assisting them in the areas of housing, employment, education, financial stability, and health and wellness. Its mission, one it has been carrying out for nearly 10 years, is to provide assistance to women veterans and military families and prepare them for successful post-military lives.

Deborah Harmon-Pugh, the national campaign chair for Women Veterans ROCK and a professor at Chestnut Hill College, called Saturday’s event “significant.” She added that women veterans and female service members are, after years of invisibility, now at a point where their “voices will be heard in the public square.”