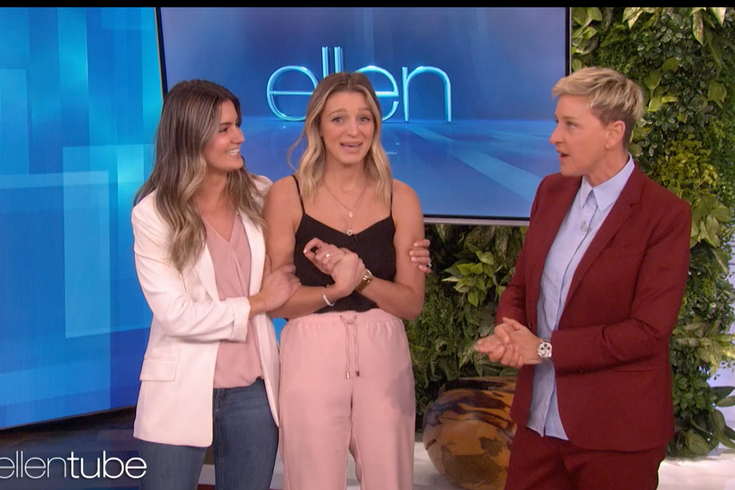 Philadelphia same-sex couple Sarah Sulsenti and Kate Austin appeared on 'The Ellen Show' on Tuesday. DeGeneres surprised the couple with a wedding gift.

Ellen DeGeneres surprised Philadelphia same-sex couple Kate Austin and Sarah Sulsenti with a wedding gift after inviting the two women to her show on Tuesday.

Austin, a LGBTQ+ influencer originally from Ohio, had tweeted DeGeneres and Chrissy Teigen on Nov. 5 with photos of her engagement in Paris to her partner Sulsenti. She noted her parents would not be attending their wedding because hey did not approve of her being gay and asked both, Teigen and DeGeneres, if they would come walk her down the aisle and be her partner in the father/daughter dance.

DeGeneres saw the tweet and invited the couple to be in the audience at "The Ellen Show."

hi @chrissyteigen & @TheEllenShow!! my parents aren’t going to attend my wedding because they don’t like that i’m gay! i need someone to walk me down the aisle and someone else for a “father/daughter” dance. plz come, my fiancée and i would cry 💕 #shootingmyshot pic.twitter.com/DGcH2KQq5f

During the segment, "Show Me Your Tweets," the host revealed Austin's tweet and asked the couple to come to the stage and sit with her. Sulsenti talked about her shock during the Paris proposal and mentioned she had been planning her own proposal before Austin got down on one knee.

Following the interview, a group of family and friends joined the couple and DeGeneres on stage as Sulsenti got her shot to propose to Austin. (Spoiler: She said yes.)

DeGeneres offered a supportive message to Austin and everyone watching that isn't accepted by their family.

"You are loved by so many people and we love you for who you are exactly," she said, then surprised the couple with a $25,000 check from Shutterfly to stock their open bar at their wedding.

While DeGeneres said she can't attend the wedding, offered the couple a cardboard cut out of herself, equipped with tissues for any tears of joy.