Aleathea Gillard coldly stared toward the front of the courtroom, betraying little emotion as Shareena Johnson held her head in her hands sobbing loudly, and Kaisha Duggins wiped the tears from her eyes with the inside of her sweater.

Behind the closed door of Courtroom 607, a defendant’s 11-year-old daughter could be heard screaming “Mommy!” through tears.

This is what justice looked like after an emotional three-hour sentencing hearing more than three years after the trio of women participated – with three juveniles – in the fatal beating of a homeless man outside an Olney gas station.

Around 1 p.m. Friday, Common Pleas Court Judge Sandy L.V. Byrd sentenced the women – all mothers – on charges of voluntary manslaughter, conspiracy and possession of an instrument of crime after pleading guilty earlier this year.

Both Gillard and Duggins – who were seen beating 51-year-old Robert Barnes with a rocking-chair leg and hammer, respectively, in surveillance video of the brutal April 7, 2015 attack – received the maximum sentence of 22.5 to 45 years in prison.

Joachim – who is Duggins’ sister – was sentenced to 12.5 to 25 years in prison on the same charges.

Her sentence was less than her co-defendants because the weapon she wielded was Mace, and she was so inept with it that she missed Barnes and sprayed it in the face of one of the children who were involved in the attack.

That latter detail is what Byrd cited when explaining why he leaned toward the higher end of the sentencing guideline even after the defense attorneys made the case that he shouldn’t. He labeled the actions he saw on film as the “very worst attributes of humanity.”

In a courtroom packed with Barnes’ family and friends, as well as those of the co-defendants, Gillard attorney Robert Gamberg pleaded for leniency for his client, the mother of eight children.

She allegedly initiated the attack after one of her sons told her, falsely, that Barnes – a homeless man well known in the neighborhood – had attacked him outside the gas station.

The women and children – the three juvenile suspects have already pleaded guilty to third-degree murder – hopped in a minivan and drove back to the scene. The attack, which left Barnes so badly injured that he remained comatose until his death nearly eight months later – started immediately upon their arrival.

“She was living a pretty good life, and then just goes off the deep end, losing it,” Gamberg said of the 37-year-old woman's immediate reaction to her son’s false claim.

He noted that many parents, himself included after reflecting “long and hard” on the scenario, would likely have reacted before thinking reasonably.

Addressing the court on her own behalf, Gillard apologized for what they’d put the Barnes family through.

For his part Joachim’s attorney, Benjamin Cooper, asked the judge for leniency because his client’s actions on the scene were not as severe as the co-defendants’. He also noted that Joachim’s diagnoses of bipolar disorder and depression should be factored into the sentence.

“She’s redeemable,” he said. “She’s a good person who did a bad thing, one time, and it was a horrible result.”

Joachim and Duggins started loudly sobbing when their mother, Marie Joachim, walked to the front of the room to beg the judge to take mercy on her daughters.

“I raised them by myself and did the best I could. I’ve suffered every day since this happened. I’m getting older. I will die soon,” she said, implying that she’d like her daughters not to be behind bars when that happens.

“I haven’t forgiven myself for this,” Shareena Joachim said. “I’m so sorry.”

“You involved minor children as combatants in (an incident) that led to murder.” – Common Pleas Court Judge Sandy L.V. Byrd

Duggins’ attorney, David Snyder, also sought leniency, claiming his client wasn’t as responsible for Barnes’ death as the others. He wasn’t as successful as Cooper in that regard.

He spoke of the mental challenges that Duggins, 28, faces: Self-medicating for bipolar disorder to the point that, on that day, she’d taken a Xanax, drank cough syrup and “washed down the medication with alcohol.”

“I wish I could take it back,” Duggins said. “I wish they’d forgive me for what I’ve done.”

After the defendants spoke, seven people from the Barnes group addressed the judge about the horrible aftermath of an unnecessary, tragic event.

A first cousin spoke about Barnes’ love of life despite strugging with alcoholism and being homeless off and on throughout his adult years. 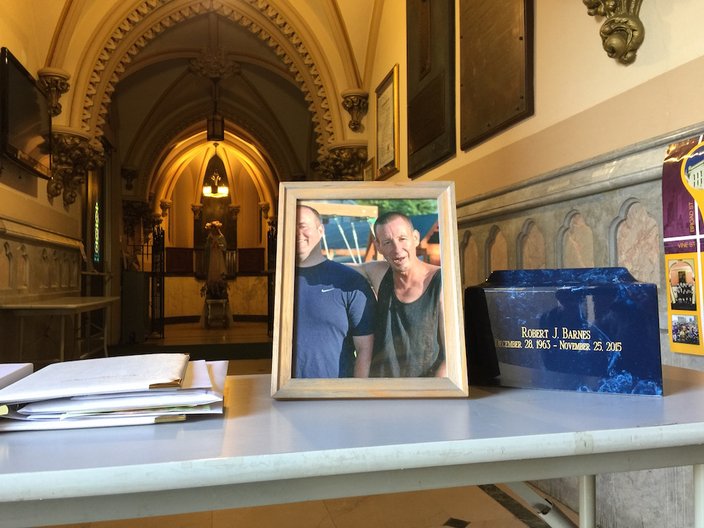 A family friend hearkened back to their childhoods, offering a vignette about the times they’d put a family dog named Brownie in a stroller and walk it up and down the block.

“I’ve lost faith in the world we live in. There’s no compassion. There’s no regard for someone’s life,” said Barnes’ sister Diane, welling up with tears while talking about how their mother died while Robert lay comatose.

As the sentencing time approached, Assistant District Attorney Chesley Lightsey focused on the egregious nature of a mother bringing her children along in an effort to assault someone for a perceived attack on a relative.

“She took her children,” she said pointedly, of which two will now be saddled with a murder rap on their record. “She brought them to teach them this is how you handle your business when something happens to our family, in our neighborhood.”

Lightsey said the video served as evidence that it wasn’t the first time they’d heard such a life lesson.

“It was second nature,” she said, noting that two of the children have been having difficulty in placement because of what she termed "their poor upbringing.”

As for the assertion that Duggins was “least culpable,” she noted that the woman “brings a hammer to strike a human being in the head.” She noted a simple-assault conviction in 2009 and conflicts with guards while in custody on these charges.

“They had zero compassion for another human being on that fateful day,” the prosecutor said of the defendants.

Byrd sided with Lightsey’s take on events, much to the dismay of the defense attorneys who seemed floored when he announced the maximum sentences for two defendants.

“This is not your typical voluntary manslaughter case,” he said before sentencing the women. “You involved minor children as combatants in (an incident) that led to murder.”

As the defendants were being led out of the room, Duggins tearfully requested the chance to hug her mother before heading back into custody. Byrd deferred to the Sheriff’s Department deputies in the room, who coldly told her she could not.

As for Diane Barnes, Friday marked the end of a painful chapter in her family’s history. She told her brother, while comatose, that she wouldn’t stop fighting until she got justice for him. On this day, she finally did.

“I feel good. I really do. I’m happy that the judge showed them no leniency,” she said. “It got me a little upset when they said they wanted to apologize. Don’t dare try to apologize now. You’re only doing that now because you feel bad that you got caught.

“And I was so happy when they said she couldn’t hug her mother. I’ll never get to hug my brother again. That turned my stomach a little bit. But I definitely feel good. I walked outside into a nice, sunny, beautiful day, and they won’t get to do that for many years.”