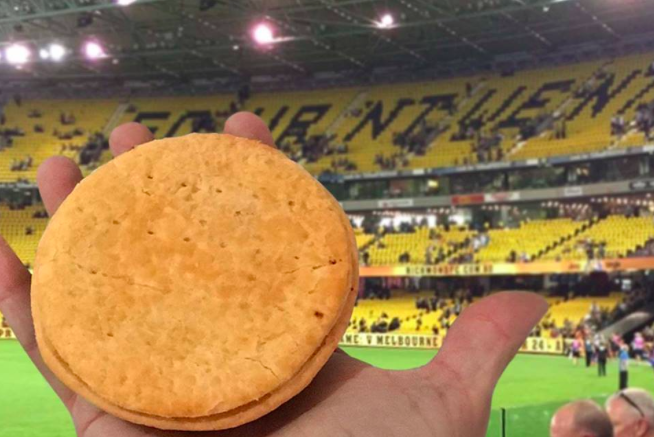 Darren Rovell, ESPN's sports business reporter, is routinely roasted by sites like Deadspin for acting as a bit of a booster for various products and unvarnished public relations campaigns.

The criticism has obviously never impeded his efforts, or else he wouldn't have been sampling the Sixers' new meat pies, a concession item added at the Wells Fargo Center to riff on Ben Simmons' Australian roots.

These meat pies are something else, let me tell you. They sat tantalizing in a proofing case, glowing under the intense heat lamp, with a tub of gravy right next to it. I will confess that with the gravy, I used a fork and knife. Without the gravy, I just picked it up and ate it like an empanada.

The @sixers, inspired by Australian star Ben Simmons, are now selling Meat Pies at their games. I put them to the taste test this morning. pic.twitter.com/vgtSDaeLcv

There was no gravy, and his use of cutlery apparently was not okay with people from Australia.

A word of advice, don't use cutlery to eat a Four N Twenty, that's what you've got two hands for!

Even a police department warned Rovell he wasn't eating his meat pie correctly.

Steady on, you could get cautioned for treating a meat pie like that 😲 #FreshPrince https://t.co/o0SgyKxqat

I have been destroyed all day for how I apparently tested out the Australian meat pie being offered at 76ers games. Now that the police are involved, I would like to extend my sincere apologies. https://t.co/HNa24A5YGc

I am sorry to all Australians for my lack of understanding on how to eat a meat pie.

We’ve entered Day Two of the entire nation of Australia bashing me for my handling of a meat pie. It’s apparently now news. pic.twitter.com/kn5w92udH0

Honestly, the news here is that you should try these meat pies.