Dr. Hai-Lung Dai speaks out after Board of Trustees vote to remove president Neil D. Theobald 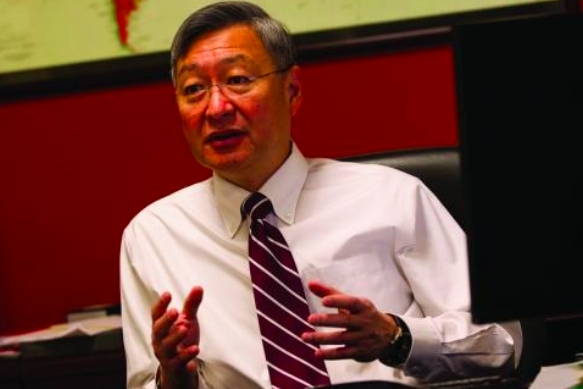 Former Temple University provost Hai-Lung Dai, the administrator at the center of Tuesday's Board of Trustees vote to dismiss president Neil D. Theobald, issued a statement Wednesday defending himself against an allegation of sexual harassment.

Dai was relieved of his responsibilities two weeks ago, effective immediately, after the university revealed it had over-allocated $22 million in 2016-2017 merit scholarship funding. At the time, it was strongly believed that Theobald held Dai accountable for the university exceeding its financial aid budget.

Then on Tuesday, after the Board of Trustees unanimously voted to remove Theobald, a spokesman revealed that a recent email from Theobald referenced a sexual harassment allegation against Dai dating back more than six years.

"Yesterday a pending accusation of retaliation that has been leveled against me by a subordinate I had disciplined for performance failures was characterized as a sexual harassment complaint and publically linked to my removal as Provost of Temple. Both the public accusation of harassment and private accusation of retaliation are complete and utter fabrications. The accusation of misconduct that has been made against me is alleged to have occurred over 6 years ago, and is alleged to have been of a verbal nature. My accuser never complained of any inappropriate conduct by me until well after I had disciplined her as part of a well-documented corrective process. Those corrective measures were taken in consultation with Temple’s department of human resources and its legal counsel."

Dai, a chemist and Taiwanese native, joined Temple University in 2007 as Dean of the College of Science and Technology. He became interim provost in 2012 and officially assumed the position in 2013. His replacement, JoAnne A. Epps, was officially appointed during the public portion of Tuesday's board meeting.

Dai's statement further claims the sexual harassment complaint was not filed until "well after" Theobald asked Dai to step down.

"At no time, until yesterday, was there any suggestion that those allegations formed a basis for my unjustified and public dismissal as Provost," he said.

Prior to the board vote on Theobald, several thousand Temple faculty members had signed an online petition calling for scrutiny of president Theobald's leadership in handling Dai's dismissal. They questioned Dai's immediate removal without any mention of "serious allegations of malfeasance," particularly considering that the budget had already been rebalanced by shifting departmental resources.

In a separate statement, Dai addressed his alleged role in the $22 million deficit.

"This involves a program that has greatly enhanced Temple’s reputation and has benefitted many students. It has also resulted in a net gain to Temple in student enrollment and tuition. I was not informed of any deficit until March of this year. As the Board of Trustees said yesterday, the responsibility for managing budgetary matters rests with the President."

Pierce called the sexual harassment allegations "unconscionable" and suggested that someone at Temple violated the confidentiality of both Dai and the alleged victim in an act of ill-will.

"I look forward to complete exoneration at the close of that investigation," Dai added. "Whenever that process ends, it will only be a first step. I will answer those fabricated charges, in a public forum and I will not rest or retreat until I have pursued every avenue available to me, including through a court of law, to restore my good name."