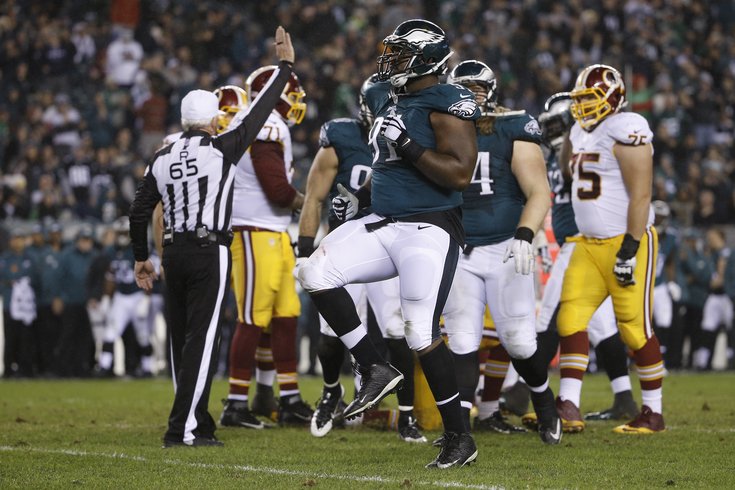 "Jim Schwartz is my coach in a contract year? Yay!"

Far too often last season, opposing quarterbacks had all day to survey the field, go from one read to the next, and find an open target because the Eagles pass rush could not generate enough pressure. That was often due to the controlled way with which the Eagles rushed the passer, from a scheme perspective.

Enter new defensive coordinator Jim Schwartz, who does not subscribe to the two-gapping style employed by Chip Kelly, Bill Davis, and the old gang. When reporters were trying to pin down what type of scheme he would run, Schwartz defined it in one word.

"I'd say if you want to label a defensive front or style there, it would be 'attack,'" he said. "It's not a 'read and react' system. It's not a 'lateral line of scrimmage.' We want to attack, we want to knock back, we want to put pressure on the quarterback. We want to create negative plays, and I like this group.

"Fletcher Cox. And I know he's a free agent, but Cedric Thornton, and you know, Vinny Curry, free agent. Connor Barwin. Those are guys that can do that. Brandon Graham, I had him at the Senior Bowl, and he was my MVP. We helped him get drafted in the first round. He might owe me a little bit of that signing bonus. I think he had three or four sacks in that game. Those guys all fit that style. They're attack players. If we can get after the quarterback without having to blitz, we'll be in great position."

There was truth in Schwartz's comment about Graham owing him part of his signing bonus. At the 2010 Senior Bowl, Graham played on the North Team, which was coached by Schwartz's Detroit Lions. Graham had a tremendous week of practices, followed by an outstanding game in which he caused havoc in the backfield all day on his way to the game MVP award. While Schwartz was joking about the signing bonus, he absolutely meant the part about helping boost his draft stock.

Schwartz has had success with a bevy of pass rushers in the past. He listed 13 of them in total, in his stops from Tennessee to Detroit, to Buffalo.

"I was very fortunate in Tennessee to have Jevon Kearse, to have Albert Haynesworth, to have Kyle Vanden Bosch, to have Kevin Carter, Robaire Smith, some really talented players up front. In Detroit, we drafted that way. Ndamukong Suh, Nick Fairley, brought in Kyle Vanden Bosch, had Cliff Avril. Went to Buffalo, had Jerry Hughes, Mario Williams, Marcell Dareus, Kyle Williams, as talented of guys as you're ever going to be around."

Schwartz gave the players the credit for being talented, however, the numbers suggest that Schwartz helped their pass rush numbers significantly. Below are the 13 players Schwartz mentioned, and the number of sacks they had per 16 games with him, and without him.

As you can see, 11 of the 13 players above got to the quarterback more frequently with Schwartz than without him.

The most talented part of the Eagles' defense is their defensive line, led by Fletcher Cox, and it appears that Schwartz will build his defense around it.

"There's nothing worse as a defensive play caller to know that you have to blitz to get pressure on the quarterback," said Schwartz.

Thirty-seven sacks vs 633 pass attempts are not acceptable with the talent the Eagles have up front. Expect the Eagles defensive line to attack in 2016, and for their sack numbers to rise.