Eytan Shander: Feel free to boo the Eagles (and Howie Roseman) anywhere — it's our way 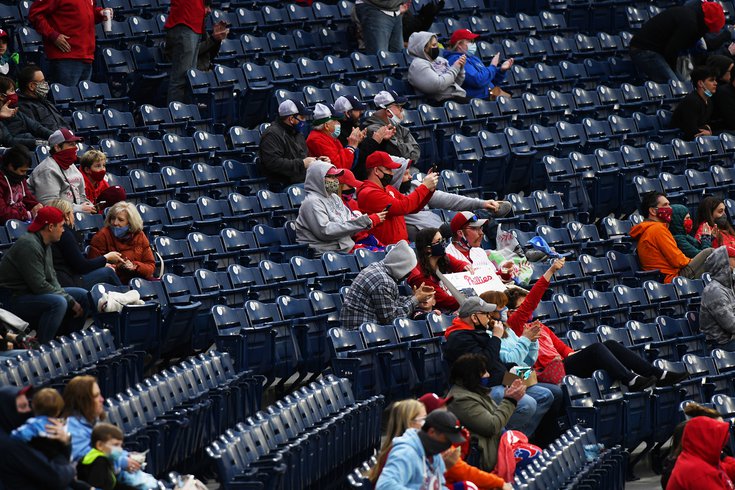 PHILADELPHIA, PA - APRIL 17: Fans at the Philadelphia Phillies game against the St. Louis Cardinals on April 17, 2021 at Citizens Bank Park in Philadelphia.

This is an Eagles town.

We live and die with every single Flyers and Sixers game like it’s a 16 (or 17) game NFL schedule. We do it with the Phillies for 162 games! We can’t help ourselves and I absolutely love it.

The latest manifestation of how much we care, and how much accountability we hold, was found earlier this week at the Phillies-Giants game.

No, not in the form of booing Gabe Kapler – one of the stupidest focal points of anger from this fan base – but rather calling for the firing of Howie Roseman.

At a Phillies game.

Nobody else does this. No other fan base reminds the biggest fish in town how bad they smell at another game. Nobody in Houston is holding the Rockets accountable for trading away everyone at an Astros game. It’s not happening in LA where half of the people root for other teams. People aren’t calling for the firing of Dave Gettleman at Mets games.

It’s a perfect example of how we — as fans — hold our most beloved team accountable. In this case it’s the two people who can’t be fired nor removed no matter how bad things get. Howie Roseman appears bulletproof because his Kevlar jacket is made from the DNA of Jeffrey Lurie.

I applaud any fan of Philadelphia sports holding a team accountable for their mishaps — holding a team’s feet to the fire after imploding a Super Bowl winner. Honestly, I couldn’t care less if fans at the game think it’s a distraction or not the right time and/or place.

They dominate in all mediums. So why wouldn’t they be brought up at a Phillies game? Why wouldn’t fans vent frustration over another Flyers loss by screaming for the firing of Howie Roseman? Joke all you want about how ridiculous or out of place it sounds, but for me it’s far from any laughing matter. At least not with the people doing the booing.

It’s one of our few remaining vehicles of expression.

Sometimes we feel helpless. Often times we turn out to know more than the GM and front office types, because it’s not really hard to work that job. Not like a coach, or player, or even a scout. Being a GM with zero accountability from your owner is probably the easiest job in sports.

It’s not enough to just boo the Eagles players, or coaching staff, or even Roseman and Lurie at the games. They have to hear us no matter where it is. If the Phillies are down on a west coast road trip or the Sixers are losing in Brooklyn in the ECF, there’s still opportunity to be heard.

Make it as uncomfortable as possible. Remind Lurie and Roseman that this is an Eagles town. Never stop holding the team we love accountable even if another owner mentions it to Lurie in passing. Never feel bad about calling for the firing of someone mishandling your favorite football team.

Yes, there’s a time and place to boo Roseman and Lurie. The time is now and the place is anywhere a Philadelphia team is playing.

Ben Simmons. We can’t get away from him. No matter what happens with the Sixers, he’s the story. Even when he doesn’t play! We had another conversation on the show this week. Check out Harry’s zinger.