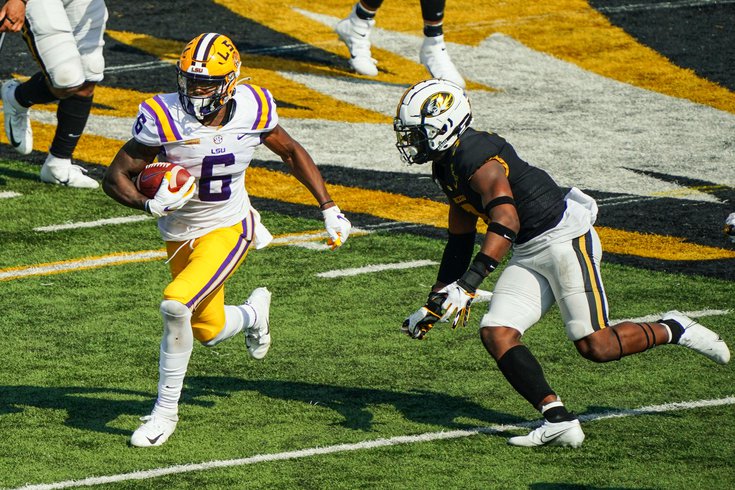 In the leadup to the 2021 NFL Draft, Philadelphia Eagles fans have focused their attention on who the team might take with their first-round pick, and for good reason. If they had to suffer through that horror show of a 2020 season, the team better at least get a really good player out of it with their high pick, right?

But the team also has something of premium pick in Round 2, at 37th overall, and it is important that they add a good player at that spot. During the Jeffrey Lurie era, the Eagles have had way more misses than hits on early second-round prospects. They hit on Zach Ertz, but missed on Sidney Jones, Nate Allen, Kevin Kolb, Winston Justice, Reggie Brown, Todd Pinkston, and Barry Gardner.

The following is a list of 10 prospects who make sense for the Birds early in Round 2.

• Terrace Marshall, WR, LSU: Of all the receivers noted in this article, Marshall has the best size (6'2, 205), and would probably make the most sense from a needs perspective as an X receiver to pair with Jalen Reagor as the Z.

Marshall was the third receiver in the pecking order at LSU behind Ja'Marr Chase and Justin Jefferson in LSU's offense during their championship run in 2019, but he was still productive in his own right, catching 13 touchdowns as a sophomore.

In 2020, with Jefferson off to the NFL and Chase opting out for the season, Marshall had a chance to shine, which he did, catching 48 passes for 731 yards (15.2 YPC) and 10 TDs in seven games. He was averaging about seven catches for 104 yards and 1.4 TDs per game, when he too decided to opt out for the rest of the season to prepare for the NFL draft.

He is a big, strong receiver with good speed for a guy his size who can beat press coverage, win contested catches, and operate both from the outside and in the slot. He also has very good hands, and rarely drops passes.

• Rashod Bateman, WR, Minnesota: Before the start of the 2020 season, Bateman was a COVID opt out, who then opted back in and played five games for the Gophers. He was at one point not only thought of as a first-round pick, but a likely Eagles target in the first round, back when, you know, we didn't know the Eagles would go 4-11-1.

Bateman's 2020 season was much like his first two seasons at Minnesota, in that he averaged just under 100 receiving yards per game.

Bateman is no longer consistently being talked about as a first-round pick, and part of that is likely because he had been listed by Minnesota at 210 pounds, but as it turns out, he's only 190. So he doesn't have the good size we thought he did before. He's also not a burner, at least in comparison to some other guys in this class, but he is a good route runner who creates separation, he makes difficult body control catches, and he's a competitive runner after the catch.

• Elijah Moore, WR, Ole Miss: Moore had a monster 2020 season, making 86 catches for 1,193 yards and eight TDs in just eight games. He is an explosive slot receiver who can make plays down the field, or on quick hitters as an extension of the run game. This is a loaded slot receiver draft, and the Eagles could stand to upgrade on Greg Ward, though I don't know if they'd take one this high.

• Rondale Moore, WR, Purdue: Moore is one of the best players in this draft from a pure "fun to watch" perspective. At 5'9, 180, he's a small receiver, but he breaks an inordinate number of tackles, and his explosiveness is obvious.

In some ways he's a little reminiscent of Penn State's KJ Hamler, in that he's a small speed slot guy with durability concerns, but in my view he is a superior prospect because he has better hands. He was also incredibly productive in two years at Purdue on "per game" basis. In 20 career college games, he averaged 8.9 catches for 95.8 yards and 0.7 TDs. To note, Moore's 2019 season was cut short due to a hamstring injury.

• Carlos Basham Jr., DE, Wake Forest: While it's not a strong edge rusher class in the first round, there could be some appealing players left over in Round 2. Guys like Michigan's Kwity Paye and Georgia's Azeez Ojulari will go Round 1, and then there are a bunch of guys with question marks thereafter, like Miami's Jaelen Phillips, PSU's Jayson Oweh, and Miami's Gregory Rousseau. If any of those guys are still available, they'd be hard to pass up. The next tier is probably Basham and Washington's Joe Tryon.

At 6'3, 272, Basham is a thick, powerful rusher who gives off some Brandon Graham vibes, who plays on both sides, can also shift inside on obvious passing downs, and is a good run stopper. He also has a good repertoire of pass rush moves, and he's a high-energy player.

• Joe Tryon, DE, Washington: Tryon has good size at 6'5, 259. He has more power than speed, with (Andy throwback alert) a great competitive motor. He only played two seasons at Washington (and only one as a starter), and then he opted out of his junior year.

As a sophomore in 2019, he had eight sacks and 12.5 TFLs in 12 games. On the one hand, he doesn't have an extensive body of work to evaluate, and he might have benefited by playing in 2020. That could scare some teams off. On the other hand, had he played well again as a junior, he'd probably be a first rounder, and could be a bargain for someone in Round 2.

• Eric Stokes, CB, Georgia: Stokes is 6'1 and he ran a 4.29 40 at his pro day, so, you know, there's that. In 2020, he picked off four passes, returning two for scores. The knock on Stokes is that he is not a refined played, technique-wise, but if the Eagles like Jonathan Gannon's track record of getting defensive backs to meet their potential, then Stokes could be an interesting player worth considering because of his upside.

• Asante Samuel, Jr., CB, Florida State: Samuel had a lot of PBUs in his FSU career (29 in 31 games), and he started to get a knack for picking off passes in his final season in 2020, when he nabbed three of them in eight games. But, he's only 5'10, 180. Obviously that's not ideal for an outside corner, but like his dad, he doesn't lack for confidence, and he played outside at FSU. The inside-outside traits could be useful early on if the Eagles have Darius Slay follow No. 1 receivers like he did in 2020.