Eytan Shander: Nick Sirianni has emotional intelligence, and something even greater

The Philadelphia Eagles have set the gold standard for not only winning games and being the best team in football, but also showing you how much fun you can have in the process. 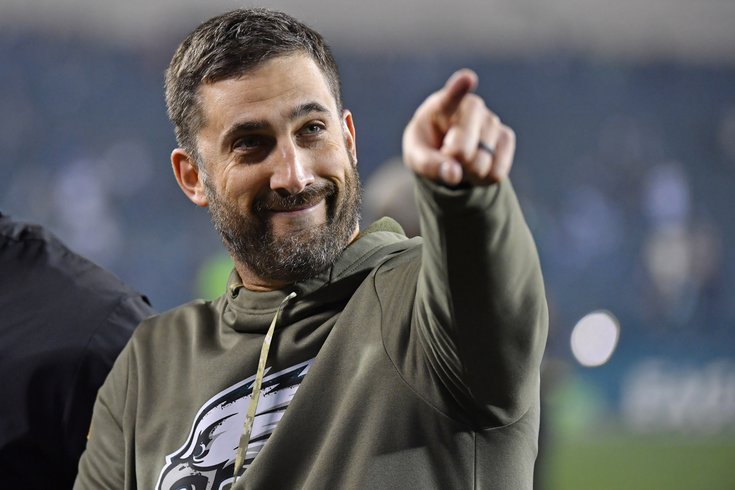 That got a lot of people in a craze nearly 20 years ago. It was also brought back up when the Birds won the Super Bowl through Doug Pederson’s tenure.

Now, we are bringing it back, but with a twist – a Nick Sirianni twist.

The Philadelphia Eagles have set the gold standard for not only winning games and being the best team in football, but also showing you how much fun you can have in the process. This team has done wonders on the field, but their head coach has done something I never thought would be possible, showing the rest of the league that being a human being to your players can actually work.

Remember when Lane Johnson called out the Patriots way and said he’d rather have fun while still winning games? That’s what is happening here. Sirianni is doing something that a few coaches have done before him, relate to everyone – players, fans, media, and his bosses.

We saw this with Doug Pederson, and Andy Reid before that, but the lack of Super Bowl victory eventually hurt that with Reid.

Absurd as that may seem, we wanted one and he was the easy target as to why we didn’t have one. Pederson brought us one. He had us believing and so does Sirianni. The latter has everyone in the building believing. Maybe that’s just facilitating the energy brought by Jalen Hurts every single day, but who cares, whatever the hell the Philadelphia Eagles head coach is doing is working. Working better than any other system or approach in the NFL this year.

This is one of the few professional sports that truly relies on everyone working together while buying into what they are doing. The combination of coaching and execution by players has to be on the same page each play, or you lose. The Eagles have established this amazing amount of trust inside their locker room that comes to life each week.

Sirianni is the anti-Bellichick. He’s the anti-Chip. It’s not lost on me that the last time the team had both a 1000-yard rusher and receiver were under Chip Kelly. We already buried Chip after Doug P brought us the Super Bowl, so consider this more of a vandalization of Kelly’s “grave”.

You see, Pederson had a similar vibe and trust of his players but the team didn’t do it the same way as both Chip and Sirianni on the field. Sure, they had an amazing group of guys with an MVP-caliber QB in Carson Wentz before he got hurt, but there wasn’t even a 1,000-yard RB or WR that stood out. Not like Miles Sanders and AJ Brown as a bell-cow back or #1 WR, respectively.

These two young men destroyed this season and it’s not even over. Brown is the best thing this team has at the WR position since Terrell Owens and it’s not even close. Sanders is an elite running back in the NFL, a league that demands you still run the damn ball. The players never get enough credit outside of the QB, who usually gets too much blame on the other side, so it’s important to honor their personal achievements with the team’s regular season success.

Did you notice something in both of their post-game interviews when they were made aware of their individual accomplishments? OK, yes, both guys credited the team, the OL, and everyone else but themselves – but there was something else.

They are having an immense amount of fun.

It’s almost as if Hurts is this rock that never moves too far off his emotions, staying the course no matter
what. He comes in happy and positive, but it’s always capped with a sense of preparation and readiness
for the next challenge.

Then here comes the head coach – loud and yelling, slapping hands and joking with Brandon Graham, throws a rolled-up ankle wrap at one of the punters, makes fun of Jason Kelce on his way out to practice. Yes, Siranni is keeping it “light” but that’s such a surface definition of what’s truly happening inside the locker room.

Some of it IS Philadelphia and knowing that when things are going well, you will have 70k+ Nick Sirianni’s cheering for you at every home game. Most of it is just this head coach understanding how to connect with people.

There’s just no way to truly quantify what’s going on with this team and their emotions and joy to play football. The easiest way to define it, while still doing it justice, would be to credit the head coach for allowing players to be people

We saw this with Pederson, it worked. Pete Carroll is going to Canton when he’s done coaching and is doing a masterful job this year with an ok team. Go back and read quotes from players during that Super Bowl run, the one that they won. You will see offensive lineman to Marshawn Lynch to a linebacker all say the same thing in their own way – Coach was able to connect to me.

That word is just loaded and it’s something that Sirianni is clearly doing with his team. Connecting to the “me” as well as the “us”. The team is made up of 53 “me’s” who are human beings with personalities and go through shit like we all do.

What Carroll did is also the opposite of what Bellichik did — instead of homogenizing the team to fit around their star QB, the individuals were able to be themselves while still fighting for the same goal.

I guarantee you Sirianni has a personal relationship with Hurts that’s different than with Kelce, Graham, Jake Elliott, or anyone else on that team. I will also guarantee you if you ever have the chance to ask any of these guys about it, they will light up with a personal story they have with “coach”.

It’s the same but different than what we just saw with Doug Pederson, and I want to make sure to highlight that Sirianni has found his own way in doing this. Whatever happens on the field, we know he has the emotional intelligence to connect with players on an individual human level, and in turn, keep a team focused on the same goal.

That is a championship-winning recipe for coaching. He’s not going to be Mike Tomlin or the hoody or some miserable coach who needs you angry and focused every day. That stuff has won, but so has this style. The latter seems to just be better for all of us.

Well, Mr. Lurie, you have your Gold Standard led by emotional intelligence and you will never have to hand over the keys to your organization again.