Fairmount braces for Popefest in Philadelphia 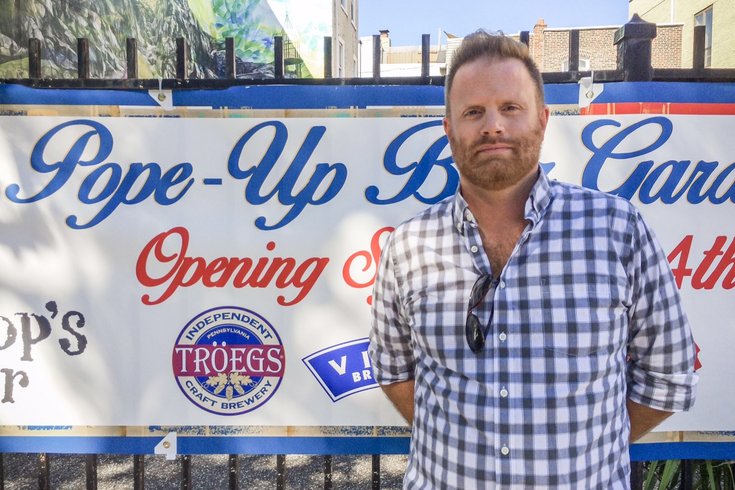 The Bishop's Collar is planning a "pope-up" beer garden during popefest weekend.

Fairmount is the ground-zero neighborhood for Pope Francis’ visit to Philadelphia next weekend.

Normally a quiet mostly-residential area near the Philadelphia Art Museum, Fairmount is holding its breath, except to utter the following: The Popepocalypse. Popenada. Popepastrophe. Popeaggedon.

And maybe – well at least some people, some of the time – praying the rosary and maybe hoping for miracles.

And even though the Secret Service has recently said no more than 300,000 people can fit on the Parkway, there’s no arguing that there’s going to be some – OK, maybe a lot – of overflow into Fairmount, which sits just east of the Parkway, behind the Barnes Foundation.

Reactions in the neighborhood break largely into three:

• Flee by Friday morning at the latest and don’t return until Monday.

• Stock up and shelter-in-place.

Of course, there is one local bar owner who swears he’s not only ordered loaves and fishes, but is also hedging by praying for a miracle or two.

Dani Bash, 27, a recent Fairmount resident, plans on getting out of town. And staying out of town, driving out of the giant no-parking and security zone and staying away until normalcy returns sometime on Monday. 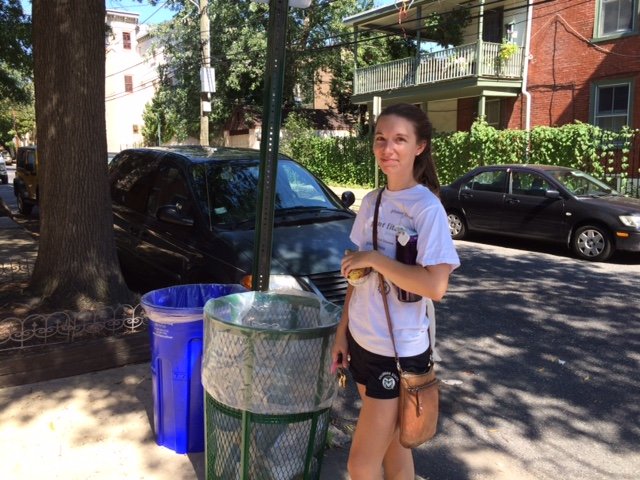 Local resident Dani Bash is getting out of Fairmount for the weekend and staying out until Monday. But she's already thankful for two Pope Francis miracles: clean streets and new trash cans on every corner. (Kevin C. Shelly / PhillyVoice)

“A lot of residents are leaning toward this being a major disruption,” says Bash, who is heartened by one development, perhaps a sign that Francis is worthy of consideration for sainthood, at least among the Fairmount faithful.

Call it a Francis miracle: streets in the Fairmount neighborhood are miraculously clean. And like silent sentinels, new trash and recycling containers now dot every corner. Resident after resident remarked on the transformation last week.

Professional dog walker Jim Kernicky, a neighborhood resident since 2007, is planning on sticking around Fairmount this weekend, however.

But he’ll be walking to get around to his usual haunts, rather than using the bike he usually pedals.

“The city is making this five days of hassle,” he says of security restrictions and traffic disruptions as he led two dogs for an afternoon stroll.

And while he’s concerned about easily getting around to reach his clients' pets, the upside is his business has picked up since so many Fairmount residents are leaving town and need his dog-walking services.

He’ll walk 10 dogs a day this weekend during the pope's visit to the city.

One of Philly’s best-known publicans, Fergus Carey, 52, swears he’s looking forward to the papal visit happening just a few blocks away from his Belgian Café, one of four bars he runs in the city. 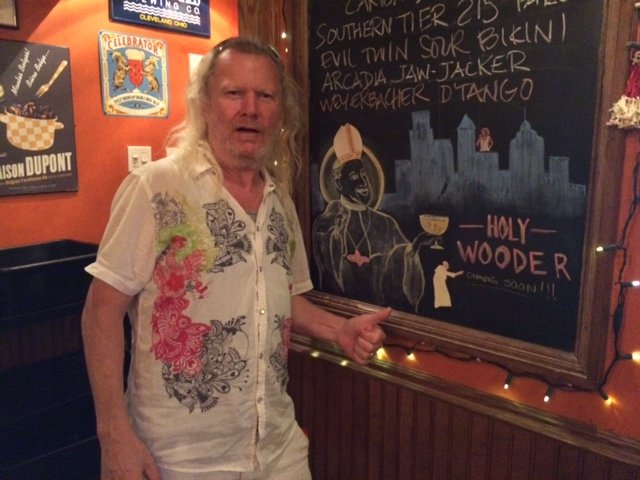 Bar owner Fergie Carey has made plans and is staying open, but he's hoping for some miracles, too. (Kevin C. Shelly / PhillyVoice)

The native of Ireland – “Fergie” to most of his customers and also the name of one of his other bars – swears he’ll be serving “holy wooder” during the visit.

And while he’s fairly confident a bit of pre-planning with suppliers and trash haulers coming “in the middle of the night,” will work out, he’s not above hoping for a couple of miracles, too.

“I’ve got to be flexible. I’m still getting emails from the city,” with new – and different – information, says Carey, a Bella Vista resident who isn’t sure his normal bike ride will work out when he tries this weekend to get to the café or his other three locations, rolling his eyes and shrugging.

Meanwhile, he’s rented a nearby apartment to give his Belgian Café workers a place to crash if they can’t get home beginning on Thursday night.

Carey shakes his head in disgust at one band. They canceled a gig for the weekend at another of his city venues, worried about transportation restrictions.

“The show must go on,” he says, sounding confident.

Not so at Zorba’s Taverna on Fairmount Avenue. They are already closed.

Run by Greek-Americans who follow the European tradition of a weeks-long vacation in August, the restaurant this year has delayed its "holiday" to coincide with the pope coming to town.

The papal visit is also forcing the cancellation of services at Olivet Covenant Presbyterian Church on Mount Vernon Street. The building also hosts the Liberti congregation, which has also canceled services.

All told, about 175 Protestant congregants will not be able to use their house of worship due to the road closings, lack of street parking and tight security measures, said the Rev. Linda Jaymes, pastor of Olivet since 1998.

The two churches were also forced to close "during that rock concert" – the Made in America Festival over Labor Day weekend – also on the Parkway.

"It's a challenge," she says, adding her church's small parking lot will be closed and chained for the weekend. 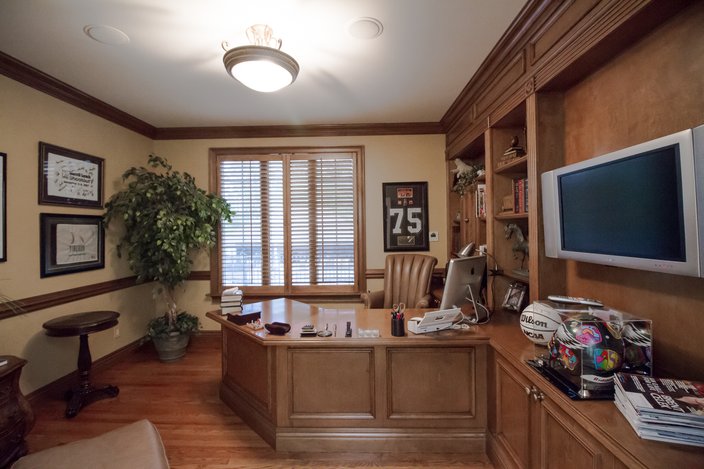 Composer Claudia Pellegrini is "relieved" to be spending four nights on an air mattress in Pitman, New Jersey, rather than in her Fairmount apartment. Her musical adaption of "Goldilocks" premieres Friday night and she is sleeping at the theater where it is being produced. (Kevin C. Shelly / PhillyVoice)

Claudia Pellegrini, 34, a composer and violinist, is leaving her apartment in Fairmount Thursday and instead sleeping on an air mattress in Pitman, New Jersey – for four nights.

That actually makes her feel “relieved.”

Relieved because the premiere of her musical adaptation of "Goldilocks" hits the Broadway Theater in Pitman on Friday night.

She knows she’ll be able to get there – because she’s sleeping there with several other displaced Philadelphians also worried about getting in and out of the city.

“We’re gonna crash and take turns showering. There’s a bunch of us in the same position,” she says as she walks away, her cased violin over her shoulder, a sound system trailing behind in a piece of luggage. 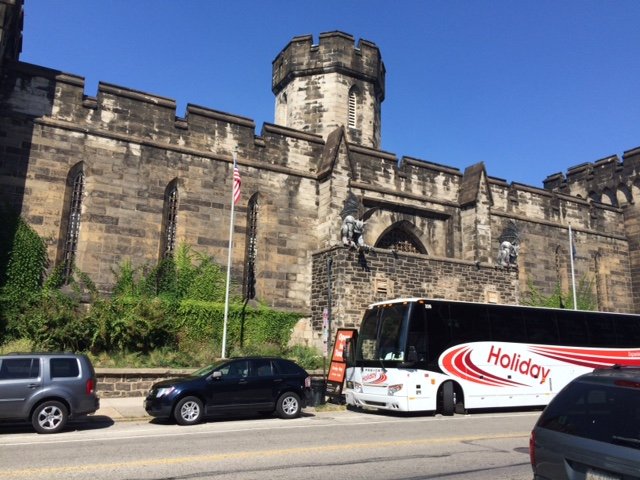 Eastern State Penitentiary will be closed Saturday through Monday, during the heart of its money-making Halloween season, because tourists won't be able to get there. (Kevin C. Shelly / PhillyVoice)

Tori Portenza, 24, an employee of Eastern State Penitentiary since March, is bummed.

Just a few days after the historic federal prison begins it annual “Terror Behind the Walls” makeover for the Halloween season, the moneymaking attraction will suspend operations.

The prison and its haunted house attraction will be closed from Saturday until next Monday because of pope-related travel restrictions.

Over at the Bishop’s Collar, bartender Michael Tramontana, 40, says they’ve decided to go with the flow, so to speak.

The bar is opening a “Pope-up Beer Garden” on Fairmount Avenue beginning Thursday.

There’ll be barbecue, a draft system for craft beers and “basic outside drinking fun,” says Tramontana.

“The Secret Service has already stopped in, so we know what to expect,” he says, paging through a tabloid while sipping an afternoon beer.

“And we have new trash cans and cleaner streets, so that’s good," he said. "And we’re seeing lots of street-level infrastructure improvements. I think it is gonna be very good for us.

“We’re treating it like a snow weekend. Those are huge for us,” says the Fishtown resident, who will likely bicycle to work.

His wife and child, meanwhile, are getting out of town.