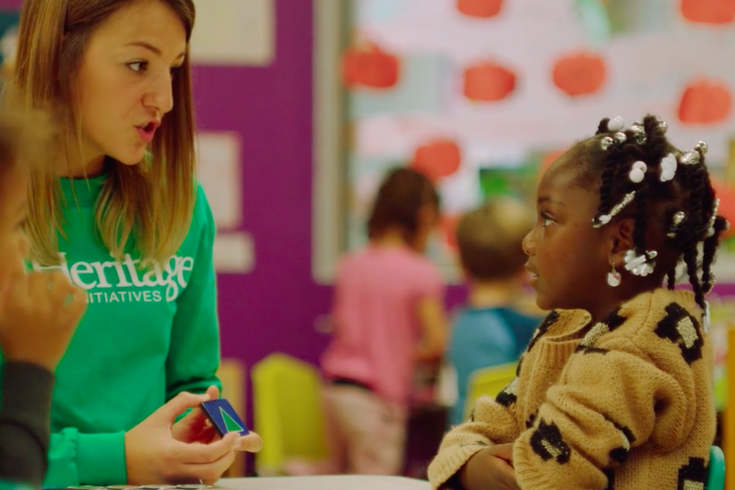 John Fetterman, the behemoth U.S. Senate candidate, released a web ad on Monday focused on early childhood education through the spectrum of a success story in the western Pennsylvania town where he serves as mayor.

The three-and-a-half minute spot centers on the nonprofit 4Kids, billed in the ad as “one of the few need-based early education programs in the country,” and specifically Shiane, a Braddock resident who discusses a harsh upbringing and her young daughter Genyah’s participation in the program.

It comes at a time when Philadelphia Mayor-Elect Jim Kenney, whom Fetterman has met and has found agreement with on many issues, said he will push forward with a $60 million plan to bring pre-K to the city’s youth once he gets into office.

“What I think 4Kids has done for Genyah is built on this incredible foundation that a parent like Shiane has already built for them,” Fetterman says in the spot, which was sent out in an "Every child deserves pre-K" email to supporters. “4Kids was started in a place like Braddock because Braddock, unfortunately, when we started, was where disparity lives. No child should be left behind in that regard.”

He goes on to discuss income gaps and how early education programs can start closing that disparity over time.

In speaking about the new web ad on Monday – it's the first in a series of videos through which he hopes to give voters "the essence of where we're coming from as a campaign" – Fetterman told PhillyVoice choosing the education video was intentional.

Focused on a theme of "inequality," he maintained education is the common thread running throughout society's woes. If children are already getting left behind before kindergarten, he argued, it likely sets the stage for a life of struggle.

"Some of these kids have parents who don't read to them, who can't read themselves, who are working three jobs to keep a roof over their head," said Fetterman, who recalls working with 18-year-old adults who read at a fourth- or fifth-grade level. "It's so tragic, the circumstances when you see it firsthand. ... As a society, we're going to pay for it. If you can't get a GED, that puts you out of 99 percent of the jobs.

"If it's not corrected by kindergarten, the academic-career foundation can't support the academic heft [in future years of schooling] that's needed to successfully embed yourself in the middle class."

Fetterman said he "can't think of a finer example" of an early education program that works to stave off those "permanent disadvantage and it's not their fault" problems later in life.

"As a small-town mayor, people ask what can you do across the state? Well, I think we have it figured out in Braddock. Small town, big solutions. It's a major issue that harms the country, sets the stage for lives of inequality. This is a core element of inequality in society," he said. "What every child deserves and needs, at a minimum, is to enter primary school on close-to equal footing.

"[Many people] just don't understand how severe the deficit is in some households. We want to ensure that every child, no matter where they're coming from, has a bare minimum foundation to be at a level that's conducive to getting an education and embedding themselves in the middle class."

Sestak's campaign website notes that he has "supported funding" for pre-K programs, while McGinty, in her recent gubernatorial campaign, touted expanded support in her "Strong Schools. Bright Futures." plan.

The winner of that race will face incumbent Republican U.S. Sen. Pat Toomey in the Nov. 8, 2016, general election.

Polling released in mid-October had all three candidates trailing the “undecided” respondents.