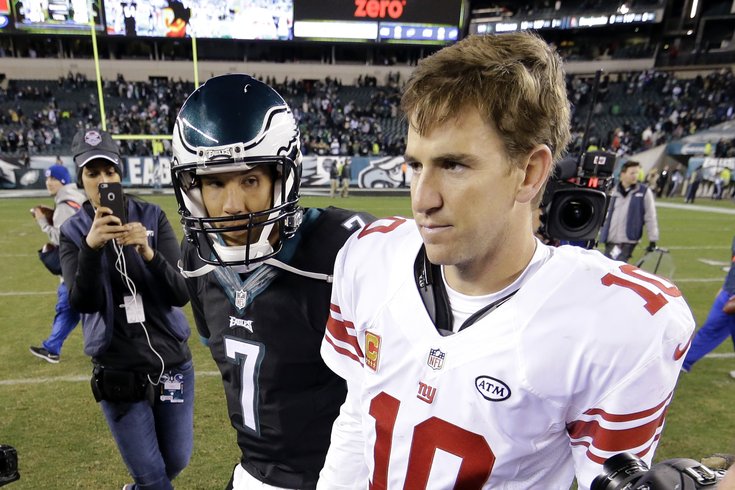 "Dude, you were even worse than me, lol."

In the second quarter of the Eagles-Giants game last Monday night, Eli Manning made what looked like a terrible throw to the outside that was picked off by Nolan Carroll and returned for a touchdown. Carroll's play made the score 14-7, and the Eagles never looked back.

However, it was less of a dumb throw by Manning, and more of a great play call from Billy Davis, executed to perfection by the Eagles defense. Let's just show the play first:

There are a bunch of things to note on the above play:

• First, watch at the bottom of the screen, pre-snap, as Odell Beckham goes in motion. Byron Maxwell follows him, which is a likely (though certainly not iron clad) tell that the Eagles are probably in man coverage. Note Eli's head turning to see if Maxwell would follow Beckham or not.

• Next, at the snap, Eli immediately looks to his left. It appears that he is reading Malcolm Jenkins who is lined up over slot receiver Dwayne Harris. He acts as though he has man coverage on Harris.

• Nolan Carroll, meanwhile, is at the top of the screen on outside receiver Rueben Randle. Carroll is acting like he is playing man coverage on Randle.

• Thinking that Jenkins cannot get around the mess off bodies to Harris running an out route, and expecting Carroll to stay on Randle, Eli he lets it rip to Harris on the out route.

• Except... D'oh! The Eagles aren't in man! They're in zone coverage across the board, so Carroll stays outside, makes the easy pick, and walks into the end zone.

The Eagles hadn't run a two-deep straight zone call all game to that point, and they picked the exact right time to call it, per Billy Davis.

"We actually sat in the two-deep zone," said Davis to reporters today. "We hadn't run it all year, and we knew, because of their quick game, that we wanted to throw some cover two in there, a hard, zone cover two. And Eli is right, he saw mostly (two-deep man coverage) from us the whole time. And right about that time in the game we put the hard (zone cover two) in, and the guys had been working hard at it all week. And (defensive backs coach]) Cory (Undlin) and the guys did a great job of ruling out all the quick game, and he threw it right into where we were hoping he would. So we stole one there, and it was fun to have the plan work that way."