Ike Barinholtz on 'The Oath,' evil social networks, and why the Eagles' Chris Long should run for office

The actor, promoting his directorial debut, talks about Twitter, politics at the Thanksgiving dinner table, and why his co-star Tiffany Haddish is the best of America 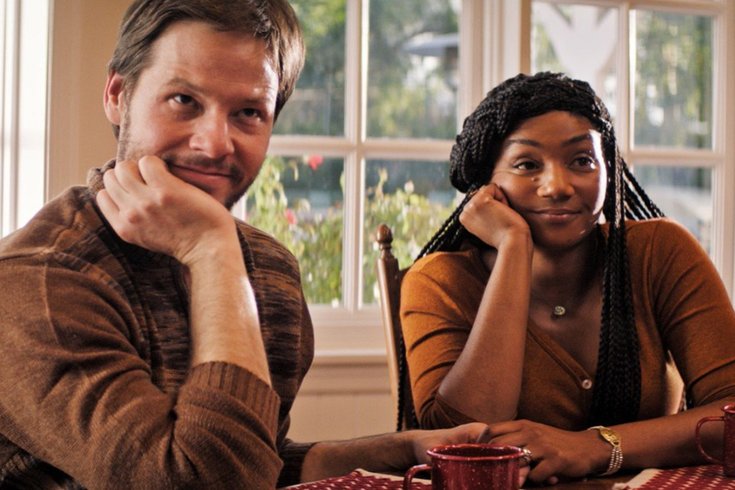 Ike Barinholtz and Tiffany Haddish in "The Oath"

Ike Barinholtz is a familiar face to most fans of comedy, even if they don't quite know him by name.

The 41-year-old Chicago native was on "Mad TV" for many years, before getting his big break as a supporting actor on Mindy Kaling's sitcom "The Mindy Project." More recently, he's brought his laughs to a series of popular comedy movies like "Neighbors," "Sisters," and "Blockers."

But Barinholtz's new movie, "The Oath," represents a big leap for him. Not only is it his first starring role in a movie, but he also wrote and directed it.

"The Oath," which opens locally on Friday, is a political satire based on a familiar topic: families gathering for a tense Thanksgiving dinner, where uncomfortable political disagreements hang in the air.

With rising star Tiffany Haddish as Barinholtz's wife, "Saturday Night Live" alumna Nora Dunn as his mother, and Barinholtz's own brother John as his fictional brother, the film has all Americans being asked to take a loyalty oath, with Barinholtz's character the lone resister.

The story goes to some surprising places, and not only because it's just as savage about satirizing the excesses of Trump-era liberalism – in the person of Barinholtz's character – as it does the conservatism of the other characters.

PhillyVoice spoke to Barinholtz during his recent visit to Philadelphia to promote the film, about why he made the movie, his prolific use of Twitter, and why he hopes a certain Eagles player someday runs for political office.

PhillyVoice: Give me the quick pitch. Why should people go and see this movie?

Ike Barinholtz: There's two types of movies that I like to see in a theater – comedies and thrillers. I think those two feed off the collective energy of an audience more than anything, and I think this movie gives you a little bit of both. I think people can laugh, and they can get scared, and the best part is, it's cathartic. Sometimes we want to scream because whatever we're feeling in the news right now is crazy, so you're gonna go watch a family explode, and go through all these same emotions that you're going through, but it's not you and it's not your family.

PV: You and Jordan Peele were co-stars on "Mad TV," and I think your film has some producers in common with "Get Out." Was he an inspiration? Was he someone you talked to a lot about the film?

IB: Oh yea. He gave me such a great note, too. Him, and Mindy Kaling, and Seth Rogen were some of the first people to see it, and his note was, 'I love so much the tone,' and he's like "you just have to be careful – there are some moments where you have something really f***ed up that happens, and you have a joke, which is great, but then you put another joke." And it's a hat on a hat. If you let the audience laugh too much, then the next thing that happens they're not gonna be programmed. You've gotta keep 'em on their heels. So he really helped me with that balance.

PV: Tiffany Haddish is in the movie [as your wife]. How close is she as a real person to the general persona you see in public? Is that the real her?

IB: Pretty close. She had a really crazy upbringing, and I think she is just the best of America. To come where she's come from, and to see where she is now, and she's so grateful of that, and so happy to be there. She's a national treasure, she really is, and she is as-advertised.

IB: I think I would say, at the end of the day, that it is probably 51 percent good, 49 percent bad, maybe a little more good. It's great because it really does give us a chance to see things in real time, and process a lot, and a lot of people have been able to help people with charity and GoFundMe and that all that stuff. So that is good, but at the same time, it does really expedite a lot of misinformation, and you can get a lot of hatred out on there, and it can also just suck away the precious time we have here on Earth. So, I'm going to give it a slight favor to the positive.

PV: That's true. I mean, it has every music video of all time, but…

IB: To watch Alan Partridge videos, it's great. But type in anything else, and you're probably going to go to some crazy dark wormhole.

PV: So what have you done on this visit to Philly that you've enjoyed?

IB: I did the two greatest things you can do in Philadelphia – I hung out with a Philadelphia Eagle, and I had a Philly cheesesteak spring roll.

PV: That was Chris Long, right?

IB: Yea, what's better than that?

PV: What did you talk about with him?

IB: Chris just came to the screening last night, I met him and his wife, and Chris is my favorite football player, don't tell his brother [Kyle Long, who plays for Barinholtz's hometown Chicago Bears.] But he is a truly evolved guy, who is not only a great player, but he is a true warrior fighting for the right side of history, and I am kind of in awe of him. And if he ever decides to run for office, I'm dropping everything and working for that dude.