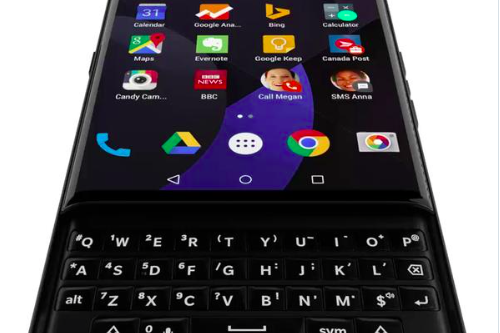 A rendering of the rumored Blackberry 'Venice' smartphone.

Over the past few months, rumors about an Android-based Blackberry smartphone have prompted a wave of speculation about what such a phone would look like. After all, despite the early success of the Blackberry 10 line in 2013, the company has struggled to keep up with Apple's iOS devices and Google's Android lines. If they can't beat them, how much would they join them?

Blogger Evan Blass, who has a strong record for phone leaks, provided the first look Wednesday at how the 'Venice' smartphone is taking shape. Fans of the old slider phones with keyboards will be pleased to find that the display apparently opens to reveal a Blackberry's classic QWERTY hardware.

In case there was any doubt... pic.twitter.com/yfFfyqEg5v

According to Android Authority, Blass said the slider will be available this November and will be offered by all four major U.S. phone carriers.

While specs aren't yet entirely clear, the 'Venice' is expected to have a curved, 5.4-inch quad HD pixel display, a Snapdragon 808 processor and 3GB of RAM.

Google Play reportedly figures to be a big part of the device, which may also be loaded with the upcoming Android M operating system set for release in the coming weeks.

Given the past popularity Blackberry phones, it wouldn't be a huge shock if the addition of Android helps the company reclaim a healthy share of the smartphone market.