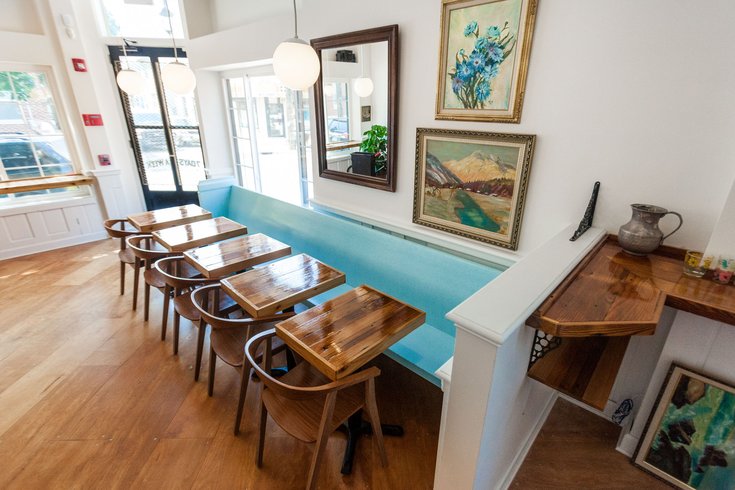 Immediately upon entering Fourth and Cross, bright blue benches jump out at you, complementing the freshly lacquered dining tables.

People of Pennsport, rejoice: Fourth and Cross is the closest thing yet to having a Sabrina's Cafe in the neighborhood -- and with dinner options, no less.

Fourth and Cross, which will open at -- surprise, surprise -- Fourth and Cross streets on June 15, is the latest project from Andrew Michaels. Michaels previously owned E's Coffee at East Passyunk Avenue and Dickinson Street and served as a chef at Philly staples like Rouge, Di Bruno Bros., the shuttered Magnolia Cafe and, yes, Sabrina's Cafe.

The concept, Michaels said, is pancakes and burgers. If you're looking for 12-ingredient dishes found on the menus of some of Philadelphia's finest, look elsewhere. It's less the place where you swish wine in your mouth after a tidy bite of souffle and more the place you lounge with the Sunday paper for an hour, complete with a cup of ReAnimator Coffee and porridge with strawberry preserves, or a stack of the most buttered-up pancakes in town.

“The best way you could describe the menu is ‘simple,’" Michaels said. "I get in trouble describing it using comparisons with other restaurants, but fact is that we’re paying a lot for good ingredients, and the only thing that could mess it up is if I mess it up by making things too complicated. High-quality, mid-Atlantic Americana -- I think that’s a good description for it." 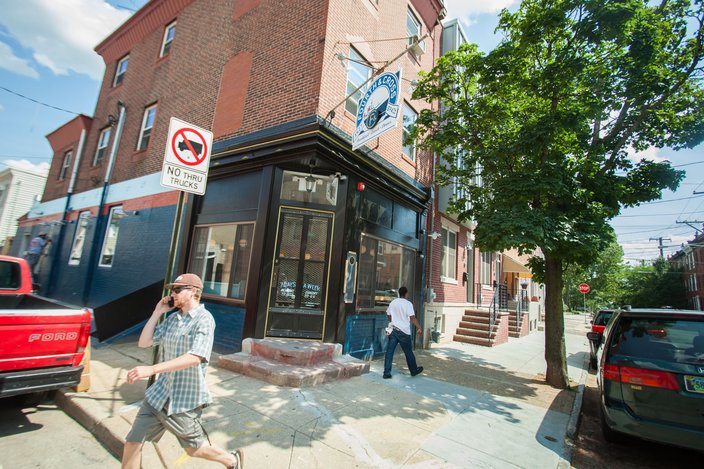 He's intentionally skipping the kind of menu you'd need "a thesaurus" for in order to enjoy. A new American, farm-to-table restaurant, all ingredients are locally sourced from Zone 7 (in New Jersey) and Lancaster Farm Fresh Co-op. Among other items, the farm-to-table ingredients will include "great seafood" and "fabulous mushrooms."

Because ingredients are local and fresh, the dinner menu will evolve, almost by the week -- particularly the seafood options, he said. For the first three weeks, he's holding off on the dinner menu to work out kinks and is putting an early focus on breakfast and lunch -- Fourth and Cross' marquee offerings. The breakfast menu, which consists of yogurts, oatmeals, omelets and pancakes, will change monthly on a rotating basis; the lunch options, of the burger-or-chicken variety, will change about every three months, with some constants. 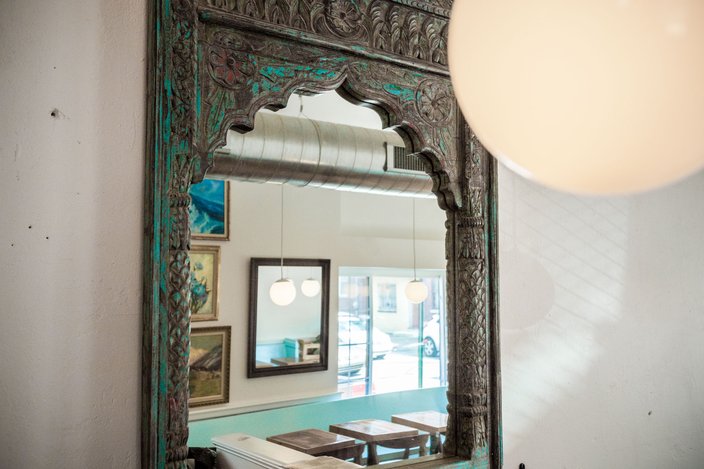 Construction of the Fourth and Cross space, mirrored to look more open, began in July 2014. Michaels selected the location to create a neighborhood spot for locals who want breakfast and lunch options closer than East Passyunk. Thom Carroll / PhillyVoice

“We’ll always have a great burger, great pancakes and great biscuits with [sausage] gravy, but we’ll also have what seems appealing by season," he said. "The fact is this: My No. 1 desire is not to push the culinary creative. I love going out to fancy meals and there are people in Philadelphia doing some extraordinary things, but me? I make pancakes. I make roast chicken – it’s a good roast chicken, but it’s a roast chicken."

Michaels also teased an Americana desserts menu consisting of a six-layer chocolate cake, as well as pastries like muffins and scones that are made daily at the restaurant by baker Elizabeth Halpenny, previously of Reading Terminal Market's Flying Monkey Cafe. As for vegan-friendly options, there will be plenty to go around -- "but I'm not putting it on the menu unless everybody can enjoy it," Michaels said.

The menu is priced affordably, so that "you can walk away having spent 8 bucks on breakfast," with lunch options not exceeding $15 and dinner entrees not going above $19. It will be open Monday through Saturday from 7:30 a.m. to 9 p.m. and on Sundays from 8 a.m. to 6 p.m. 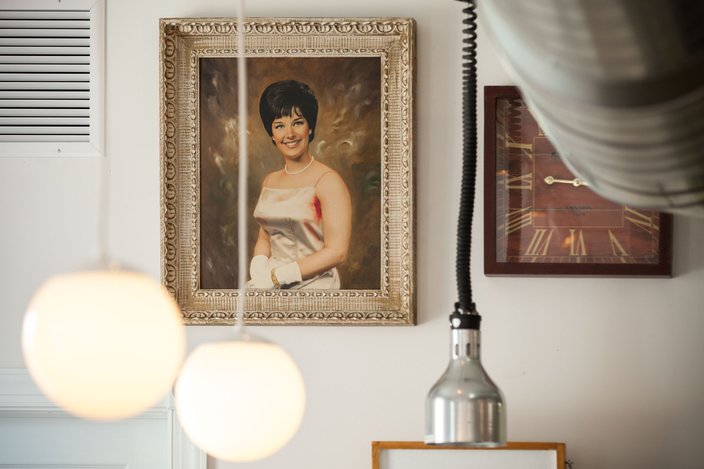 A portrait of Andrew Michaels' mother, pictured at age 17, hangs near the kitchen. Thom Carroll / PhillyVoice

The "simple" concept of the menu, meanwhile, comes to life in the 630-square-foot interior, which he described as "light and airy," with mirrors and accent pieces that add personality.

"I wanted it to be a little soothing, but not entirely uninteresting; I wanted it to have some color, but not be depressive," Michaels, who was also general contractor for the project, said. "And in terms of materials, I reused a lot of what we already had."

The tabletops and flooring are made from yellow and longleaf pines, as well as cedar and a cherry plywood -- all reclaimed from flooring that was previously installed in the building, which was previously a corner market.

Ultimately, he calls Fourth and Cross "at least a 15-year project" for him; he's in it for the long haul. And he's confident the customers will be, too. Because outside of filling a neighborhood need, he's also appealing to a basic one -- one that's not totally unlike what Honey's, Green Eggs Cafe and Sabrina's, too, have been targeting.

"People want breakfast, they want brunch; they want to be fed and read The New York Times, to watch the football game and enjoy their day -- and have something they can afford," Michaels said. "And I think there will always be a demand for that."