In first matchup with Greek Freak, Embiid wins both the battle and war

In modern coverage of the NBA, the idea of a “unicorn” (essentially, a player who can do everything on the basketball court) has made its way into the mainstream during the 2016-17 season. Bill Simmons wrote a long column centered around that very premise, which was defined well by Kevin Durant:

"He can shoot, he can make the right plays, he can defend, and he’s a 7-footer that can shoot all the way out to the three-point line. That’s rare. And block shots—that’s like a unicorn in this league."

Last month, Simmons examined couple of young players considered to be unicorns: Joel Embiid, Kristaps Porzingis and Giannis Antetokounmpo. In Milwaukee on Martin Luther King Day, a couple of those special talents, Embiid and Antetokounmpo, matched up for the first time in their careers.

“The Greek Freak” finished the first half with 21 points on 9-11 shooting, well on pace for a career day. Antetokounmpo bullied the Sixers wings and guards on switches and impacted the game defensively with his length, showing why he’ll (deservedly) be announced as an all-star starter fairly soon. He was masterful:

Oh yeah, Embiid closed out Vine in style with… well, whatever you call this:

Use the eye test or pore over the numbers, and it’s not hyperbole to say that the Sixers are a totally different team when Embiid plays. This was very apparent on a day when a couple of their best defenders (T.J. McConnell, Nerlens Noel) were unavailable. Even during a first half in which he struggled mightily on offense (missing jumpers, making poor reads out of double teams, etc.), Embiid brought it on the defensive end.

Milwaukee found some trouble finishing around the rim on the afternoon, and I would wager that most of those X's came when Embiid was on the floor: 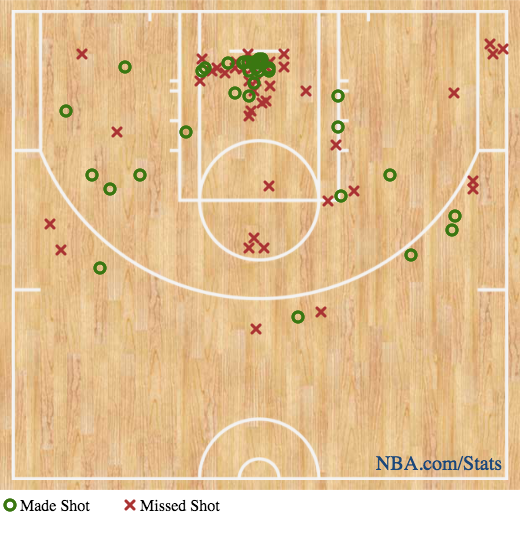 The Greek Freak will be an all-star, and it remains to be seen if Embiid will join him. While it remains a totally defensible position (and in my opinion, the correct one) to prefer Antetokounmpo slightly over Embiid in projecting for the future — Joel is actually nine months older, and Giannis doesn’t have the same injury concerns — “The Process” took Round 1 of what could be a great rivalry, announcing to his fellow unicorn that he also possesses a special combination of skills.