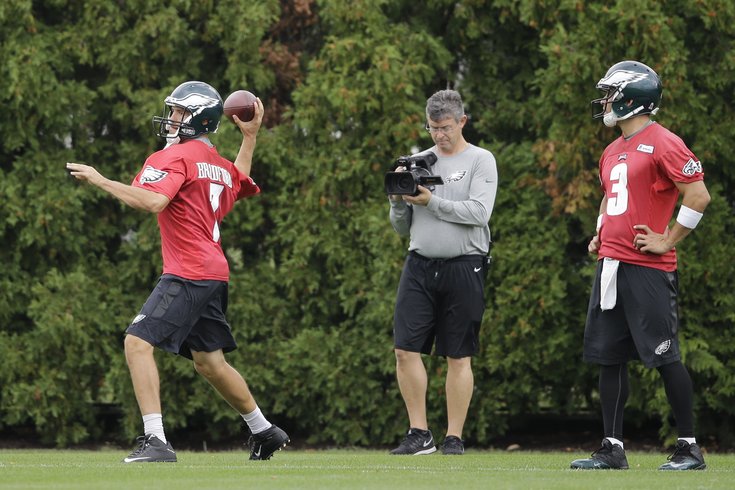 That's not Mark Sanchez looking over your shoulder anymore, Sleeves.

A week from today, the first set of Eagles OTAs will begin, marking the first time the full team will practice together in organized team activities. Later this week, the Eagles will hold a rookie minicamp.

Heading into this year's camps, the Eagles have a number of positions where there should be fun camp battles to watch. Here are five of them:

After trading up to the No. 2 overall pick, Howie Roseman opened a press conference by stating that Sam Bradford was the starter, despite the Eagles' bold move.

"Let me be clear," said Roseman. "Sam Bradford is our starting quarterback. We told Sam that. We intend to support him, and the moves we made this offseason we believe will give us the chance to compete this season."

Buuuut, when asked if "Eagles Future Rookie Quarterback X" (who would eventually become Carson Wentz) would have the opportunity to beat out Bradford for the starting job during the preseason and training camp, Roseman certainly didn't say no.

Bradford went on strike soon after and returned to the team three weeks later.

The reality is that Bradford has legitimate competition. His backup, Chase Daniel, has a built-in advantage in that he has run Doug Pederson's offense in Kansas City for the last three years.

Meanwhile, of Wentz, Bradford, and Daniel, Wentz is by far the most physically gifted. Wentz is the biggest of the three, he has the strongest arm, and he's the only legitimate threat as a runner. If the mental side of the game comes quickly for Wentz, don't be surprised if he plays a lot sooner than many are anticipating.

Make no mistake -- The starting job isn't definitively Bradford's. He's going to have to earn it.

It is assumed that Jordan Matthews and Nelson Agholor will start at wide receiver for the Eagles in 2016. While I would agree that is how it will likely shake out, Matthews has to prove that he is more than a slot receiver, and Agholor will have to prove that his natural ability will translate to the field in his second season in the pros. Matthews is clearly the best receiving weapon in the Eagles' offense, but Agholor's spot could be at risk.

Agholor was a first round pick a year ago, but with a new coaching staff in place, there are no guarantees that he will start. When the Eagles signed Rueben Randle this offseason, they brought in a player who started all 16 games for Giants a year ago, and 29 over the last two. Randle is still very young, as he just turned 25 three days ago, and he has 188 receptions over a four year career. While he certainly has his flaws, particularly on the mental side of the game, he does represent legitimate competition for Agholor. Again, pencil in Agholor to start, but he has to perform.

The Eagles' starters at four of their five offensive line spots are set:

At left guard, there will be a number of players vying for the starting job. If you view the Eagles' locker room seating chart as an indicator, then Allen Barbre would be viewed as the guy whose job it is to lose, as his stall in on "OL starters row" there.

Barbre will have competition from free agent acquisition Stefen Wisniewski, who has started all 77 games of his five-year pro career, as well as third round pick Isaac Seumalo. And then there's Andrew Gardner, who was not thought to be much of a threat to win a starting job a year ago, but earned it in camp before being lost for the season with a Lisfranc injury Week 3 against the Jets.

Eric Rowe showed a lot of promise his rookie season last year and will likely start on one side at corner for the Eagles, but even that's not a guarantee. On the other side, who knows? Nolan Carroll began the season as a starter a year ago, before being put on IR after the Thanksgiving game in Detroit with a broken ankle.

And then there are corners in numbers: Leodis McKelvin, Ron Brooks, Jaylen Watkins, Denzel Rice, Randall Evans, JaCorey Shepherd, Blake Countess, Jalen Mills, and others could all get looks there.

Heading into the 2014 season, the Eagles had major kicking issues when Alex Henery couldn't kick the ball into the ocean. They acquired undrafted rookie Cody Parkey, who went on to make the Pro Bowl.

In 2015, Parkey was lost for the season when he tore all three muscles in his groin. The Eagles then brought in Caleb Sturgis, who held his own.

Parkey enters the 2016 season as the favorite, in my view. Personally, I think the Eagles should give a certain media kicking competition champion a look: