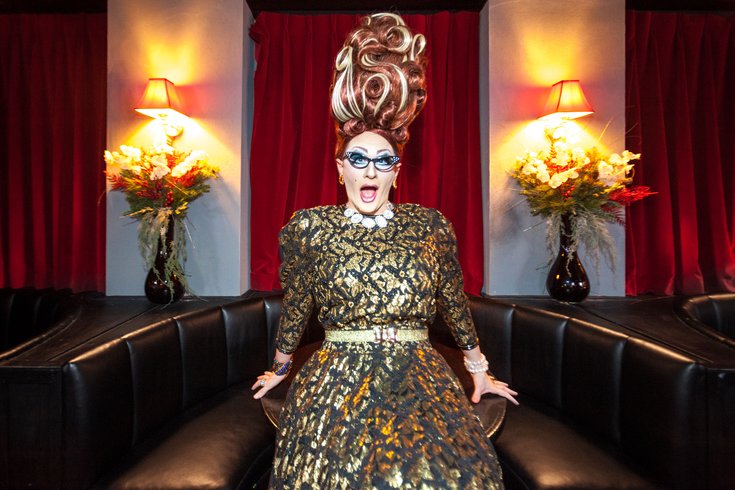 'Bev' before her performance with Brittany Lynn at Duel Piano Bar on Wednesday, Feb. 4.

Read More
Philly drag-scene darling "Bev," real name Drew Gaver, created her persona three years ago in Baltimore when tasked with playing the mother of a "Hairspray" cast member. Out of that blossomed the satirical, gaudily dressed character of Bev, who could best be described as Mom after four too many dry martinis. Since 2013, she's been playing the character in earnest in Philadelphia bars -- tonight, at Tabu Lounge & Sports Bar's "Bearlesque," and next Wednesday night with Brittany Lynn at Duel Piano Bar. When she isn't being a funny gal on stage or sipping an Absolut Pear and soda amongst the crowd, she's working as a financial coordinator for a dental practice.

Here, we pick her brain -- uh, wig -- for the details of drag life, and what's tickling her fancy right now.

What song are you listening to on repeat right now?

Most of the music I listen to on repeat is stuff I’m trying to learn for a number. Right now, the last one I listened to over and over again was “I’m So Excited” by the Pointer Sisters. I just made a mix that combines “I’m So Excited” with Kristen Wiig’s “Surprise Party” skit from SNL, where she’s like, “I’m so freakin’ excited!” I’m one of those queens who actually likes to know the words. I just performed it for the first time over the weekend at Venture Inn, and it was well-received, so I’m sure I’ll end up doing it again.

I made a mix for my finale performance of "Drag Wars: All Stars" [at Voyeur] that combines a lot of dialogue from movies every gay guy knows: “Mommie Dearest,” “The Night the Lights Went out in Georgia” from "Designing Women," “The Devil Wears Prada” -- it was all of these little snippets strung together as phone calls. It’s probably the most fun one I’ve done, and it always gets a great reception when I do it.

How do you find your material?

I’ve always been a pop culture addict, and I’ve always been into old movies. I’m the perfect person to play Trivial Pursuit with, because I know a lot of random, off-the-wall things. So, I’ll hear a song, or a movie will come on, and I’ll be like, ‘Oh my God, I need to mix that together with something.’ And I piece it together with what I find funny at the moment.

What’s the difference between a mostly gay crowd as opposed to a mostly straight crowd?

Definitely, you learn how to tailor your performances. Like, if it’s a predominately straight crowd, I’ll have numbers that I do, where it’s like a pop song everyone knows or something universally funny, whereas an entirely gay crowd, I can do something more obscure and I know people in the room will get it. With this piano bar show [with Brittany Lynn], we’ve been doing showtunes and Disney songs, but also I did “All About That Bass” by Meghan Trainor, because it’s something a lot of straight women out on a Wednesday night who’ve been drinking will be like, ‘YASSSS!” to. So, I actually enjoy performing [for a straight audience]; I’ve done a few gigs recently that were for a predominately straight crowd, and I think the easiest way to win a crowd like that over is with humor, and that’s what I do. That’s one of my strengths, is winning a crowd. Because obviously no one’s going to think I’m a real girl. No one’s like, ‘Oh my gosh, she’s so beautiful!’ But they’ll walk out thinking I’m funny. And I’ve gotten a lot of positive feedback on that recently.

My mom once told me this: "Treat others the way you would want to be treated."