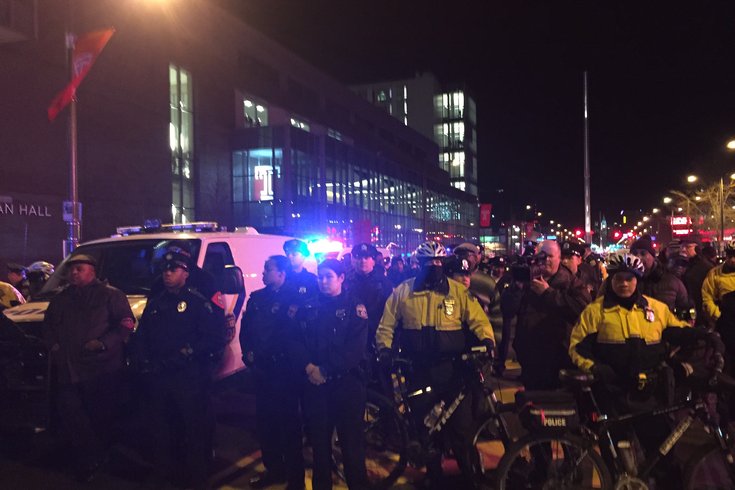 Protesters and police during a demonstration calling for criminal justice reform Friday.

Four people have been arrested and three police officers were injured during a Friday night protest in North Philadelphia that one demonstrator said was a pushback to issues that have been fought for years.

The protesters, mainly organized by the Philly Coalition for REAL Justice, gathered at Thomas Paine Plaza Friday afternoon and moved toward North Philadelphia. The protest, that ended after events escalated around 8 p.m., called for an end to stop-and-frisk policies and questioned President Donald Trump's plans for criminal justice reform, said Drew Geliebter, who participated in the protest and has in many social justice demonstrations in Philly in the past.

Philadelphia police said that shortly before 7 p.m., a crowd ran to the Bank of America at the corner of Broad Street and Cecil B. Moore Avenue when officers were sprayed with pepper spray and black spray paint. Photos of a flag burning at Broad Street and Girard Avenue also circulated on social media Friday night.

Police said 12 officers total were sprayed, three were injured, the bank was vandalized and four were arrested. A SEPTA spokesperson also confirmed that buses were rerouted as a result of the demonstration.

But Geliebter said the events that escalated Friday did not play out that way. 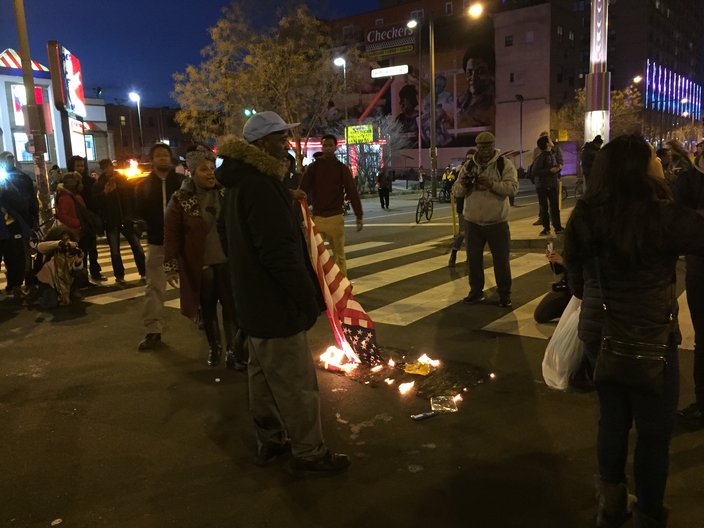 Protesters burned a flag at Broad Street and Girard Avenue during a demonstration Friday.

He said police were grabbing the groups signs at the Bank of America, and tensions grew. Geliebter said he witnessed physical altercations between police and protesters, but did not see any protesters spray the officers.

"I have no doubt that those officers sprayed themselves or each other," he said.

Geliebter said that he wouldn't describe last night's protests as "violent," but rather "militant." He said the country needs a stronger resistance to fight "issues we've been fighting for years."

"That's a scary word for people as well," he said. "We think guns, we think wars, but militant in my mind is simply resolve. It's standing strong against this."

*This article has been updated with information from police and comments from Geliebter Saturday afternoon.