Flyers continue to own Penguins in Pittsburgh

Since the Consol Energy Center opened in 2010, the Flyers are 13-2-1 in the building 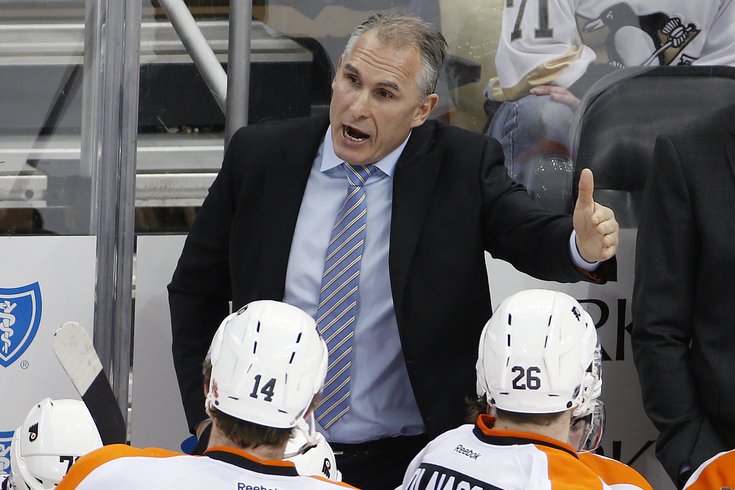 One of the easiest ledes in the history of sports writing might’ve gone something like, “Of course it was April Fools’ Day, because the Flyers outplayed Sidney Crosby and the Pittsburgh Penguins in their own barn and breezed to a 4-1 victory.”

Except that is precisely what was supposed to happen, because the Flyers have absolutely owned the Pens in Western Pennsylvania since the Consol Energy Center opened. I’m pretty sure Doc, Edzo, and Pierre remember the Flyers losing a game in Pittsburgh, but it might take each of them a few minutes to recall it.

The Penguins have lost 73 times in five seasons at Consol. Twelve of those losses (16.4 percent) have been against the Flyers.

Man, if only the Flyers told Villanova their secret. The Penguins opened their new arena in October 2010, only a couple of months after Patrick Kane somehow beat Michael Leighton in Game 6 of the Stanley Cup Finals. Since then, Pittsburgh has 229 regular season wins to the Flyers’ 189. Also in that time span, the Penguins have won three playoff series to the Flyers’ two. Of course, the only head-to-head playoff matchup was won by the Flyers (and oh boy, was that one memorable), mostly because they took the series’ first two games in Pittsburgh, in the same building that Sergei Bobrovsky opened by making 29 saves in a… you guessed it, Flyers win.

Isn’t this a funny little subplot? The Flyers have serious problems for the immediate future and the Penguins still fancy themselves as Cup contenders (though the roles could flip sooner than you think if Ron Hextall is up to the task), and it still doesn’t matter. Philadelphia continues to beat the brains out of their cross-state rivals:

When the Flyers play in Pittsburgh, all of the problems seem to go away. Frank Seravalli of the Daily News wrote a nice column about how Craig Berube’s major failing this season was how he deployed the team’s two youngest regulars. Of 23-year-old Brayden Schenn, he wrote, “This year, Berube shuffled Schenn - already playing out of position - up and down, all over the lineup for the first 55 games.” Show up in Pittsburgh, and Schenn does this:

Of 22-year-old Sean Couturier, Seravalli wrote, “He has been asked to play some of the statistically toughest minutes in the league. For the first 67 games, he was also saddled with an injured Matt Read (seven goals) and struggling R.J. Umberger (nine goals). He later added, “Only 15 forwards in the league have more defensive-zone starts than Couturier this season, and only one of them (Calgary's Sean Monahan) is younger than him.”

Just like everyone else, Coots’ night in Pittsburgh turned out just fine. Despite again being dealt a bucket of slop from Berube (nine defensive zone starts to only one offensive zone start at 5-on-5 even strength), Crosby’s opening goal was his only major mistake against the Pens star and he managed to pick up a secondary assist on one of Schenn’s goals. Evgeni Malkin was a late scratch, but it probably wouldn’t have even mattered because Couturier has had success against him in the past.

"I think we were great tonight," Steve Mason told Sam Carchidi of the Inquirer. "I wasn't really called upon to do anything spectacular and that's a credit to everyone in front of me. They really took their time and space away."

It’s not like the win helps the Flyers in any practical way, as every game counts for the upcoming McEichel lottery. The Penguins were also admittedly very shorthanded, playing only five defensemen and without Malkin, Kris Letang, and Christian Ehrhoff. Maybe those players would’ve helped Crosby and co. change the rivalry’s tide, but they certainly haven’t before.

Even when they really shouldn’t, the Flyers simply have the Penguins’ number, for whatever reason. Next thing you know, Philly will start taking ownership over “Pawnsylvania.” If Murph just takes the Flyers' lead, he won’t even have to give up the Jean-Claude Van Damme slacks to acquire the Dutch Daulton Philly Magazine from 1995, even if they’re listed at the same desired price.