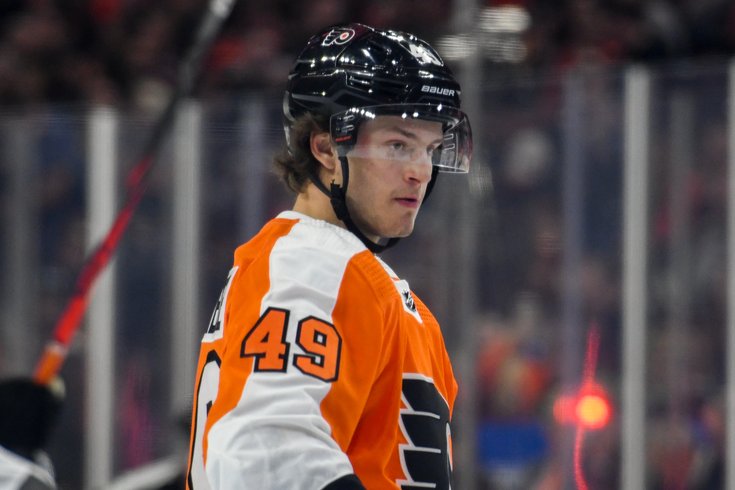 Joel Farabee during a media timeout at the Philadelphia Flyers game against the Vegas Golden Knights at the Wells Fargo Center in Philadelphia on October 21, 2019. (Kate Frese)

Through 14 games, the Flyers are pretty much what they always are — the 10th best team in the Eastern conference, playing inconsistent hockey with several players showing all too infrequent flashes of greatness.

It remains to be seen whether this new Chuck Fletcher-Alain Vigneault era of hickey will be different than the era that preceded it, but one thing is certain: the youth movement is the future of this team.

With contributions thus far from goalie Carter Hart, Joel Farabee, German Rubtsov and other recent top prospects, the future does look bright even if the present is, well, a 7-5-2 hockey team.

Lets take a quick look down at how the team's current top 10 prospects (we'll use The Athletic's rankings from preseason) are faring through the first few weeks of the season in college or down in the farm system:

The former first rounder, fresh off eye-popping back-to-back 100 point seasons in the OHL, is playing in the AHL for the first time and has shown he's a playmaker wherever he suits up. With nine points (four goals and five assists) through 10 games for the Phantoms, Frost will surely tantalizingly make his case to be called up this season. He is just 20, but he is nearly NHL ready.

Farabee won't be on this list for long as he seems to be settling in at the NHL level with a pair of goals and an assist through eight games up in the big leagues. The big winger scored early and often in the NHL to start 2019, earning a spot on the roster despite not making the team out of training camp. He's just 19 but has a great hockey IQ and some strength in his above-average frame.

We'll include Myers for now too, as he's appeared in just three Flyers games so far. He's hard to miss at 6-foot-5, and earned his first NHL point Tuesday in the Flyers' win over Carolina, assisting on a Claude Giroux goal.

"I thought for the most part Phil’s game was pretty consistent tonight. That big body, and big stick, he covers a lot of room. Early on, a couple of our D’s were maybe giving him responsibility of getting the pucks to other guys instead of maybe trying to make the right play. Like the rest of their D, I thought his game got better as the game went on."

And now for some new blood. This past offseason's No. 14 overall pick has four points in five games for the 3-4-1 Wolverines and is plus-4 during his time on the ice. The freshman was drafted for his good instincts and will only get better as he is just 18.

The offense has been slow to find Ratcliffe in his first AHL stint, as the huge 6-foot-6 winger has scored just one goal in nine games thus far in 2019-20. But the scoring should come. The 20-year-old scored 82 points in 65 games in the OHL last season. He was drafted in the second round two years ago and has a lot of upside.

Last year's 34th overall pick is off to a fast start to his college career, having scored seven points in eight games with the undefeated Denver Pioneers. Brink is a great scorer, one of the best in the 2019 draft, but there were concerns with his skating that he'll look to address in college.

Rubtsov has battled injuries but has clawed his way to the NHL after playing in just 14 games in 2018-19. To start this year, he was impressive in Lehigh Valley netting six points in seven games. He didn't find the stat sheet in three starts in Philadelphia before being sent back down to the AHL on Wednesday.

At 22, Allison is the oldest prospect on our list and in his senior season with the Broncos. That he has yet to sign with the Flyers is a negative, as is his ACL injury last season that has slowed down his development in the college ranks. A strong senior campaign at Western Michigan will be important for the Flyers to see before they reach a deal with the 2016 draft pick.

Ersson was kind of a late-round flier when Philly took him in the fifth round of the 2018 NHL Draft, but they may have found a possible backup plan for Hart between the pipes. In Sweden last season, Ersson was named the MVP of the Allsvenskan, with a ridiculous .195 goals against average and .933 save percentage in 36 games. He is 20 and playing again in the SHL this season.

Another Swedish goalie rounds out the current top 10, with Sandstrom playing for the Royals in the ECHL this season. He's had one shutout and has a 3-3 record so far this year with a 3.92 gaa and .871 save percentage in the early going.