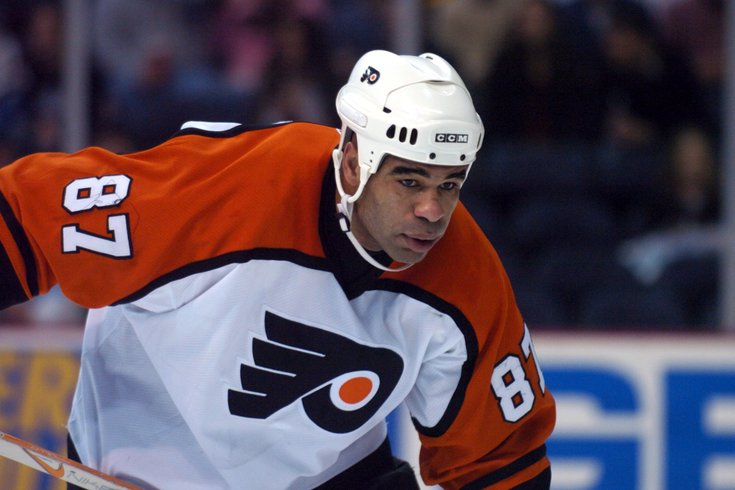 Former Flyers enforcer Donald Brashear, who spent 16 years in the NHL, is now working at a Tim Hortons in Quebec City. Brashear was known as one of hockey's fiercest fighters for years.

Former Flyers enforcer Donald Brashear, who spent 16 years in the NHL, is now working at a Tim Hortons in Quebec City. On Wednesday, coverage from Canadian news outlets about Brashear's current employment went semi-viral and sparked a discussion about what is newsworthy after a professional athlete retires from pro sports' spotlight.

Brashear, 47, spent 270 games with the Flyers from 2001 to 2006, scoring 22 goals and adding 44 assists to go along with 648 penalty minutes. He was known as an enforcer during the NHL's clutch-and-grab era, and found work with five different teams during his career. He ended his career with 85 goals, 120 assists, and 2,634 penalty minutes.

Recently, according to Le Journal de Quebec, Brashear was spotted working at a Tim Hortons drive-through window. (For those without the requisite Canada knowledge, a Tim Hortons is essentially a Dunkin Donuts, except with more maple-flavored offerings and better doughnuts.)

Brashear is working for fellow former NHL player and current Tim Hortons franchisee Pierre Sévigny, with whom Brashear played during his first few years in the league as a member of the Montreal Canadiens, according to the Le Journal article. Brashear just started as an employee, according to Sévigny.

Brashear's post-NHL years have been turbulent. This past June, he was arrested for breaking a window in a Quebec City apartment building, and was also found to be in possession of cocaine. Brashear was staying at the apartment building following bankruptcy proceedings for his company, Brash Properties 87, last November.

Plenty of hockey fans were unhappy Wednesday at the tone in which Brashear's new employment has been covered:

I don’t care where Mr Brashear is working. He had the toughest job in sports while active. It would be an honour and privilege to have him serve me @TimHortons. https://t.co/XqbKYzyAsE

Former NHL enforcer Donald Brashear is working in Quebec.........….there, I fixed the headline for you.

What does it matter where or who for? He's making an honest living and working on atoning for his past mistakes. At what point does it matter that it's at Tim Horton's??? https://t.co/ww2paj4bjp

Here's the Donald Brashear that you should be remembering.
Not sure what it's newsworthy where he is working in his post-hockey career. pic.twitter.com/miCgYTbE6G

There's absolutely nothing shameful about what Donald Brashear is doing and he doesn't deserve to be mocked.

The man is trying to make ends meet in his life after pro sports and that means working at Tim Hortons like thousands of other Canadians do. pic.twitter.com/fTBGxlgEiq

I respect Donald Brashear for working at Tim's. My mom (RIP) worked at Home Depot while finishing her B.Ed at 60 years old and finally, after surviving chemo/cancer, achieved her goal of becoming a teacher shortly before she died. I think my mom would be proud of Donald

The mild media circus surrounding Brashear's new employment is reminiscent of last year's coverage of Geoffrey Owens, the former "The Cosby Show" actor who was spotted working at a Trader Joe's in Clifton, New Jersey after falling on hard times.

Plenty of people have used the coverage and subsequent discussion as an opportunity to point out the ways pro athletes are taken advantage of during, and after, their lucrative-but-brief careers. According to Cap Friendly, Brashear earned more than $16 million during his 16-year NHL career. He was last paid by an NHL team in 2010, when the Atlanta Thrashers (now the Winnipeg Jets) bought out the remainder of his contract for $866,667.