Former Pennsylvania pol will serve as pallbearer for John McCain

The family of U.S. Sen. John McCain of Arizona, who died Saturday of brain cancer, has announced 15 pallbearers who will carry the Vietnam War hero's casket during a memorial service on Saturday at Washington National Cathedral.

They include a Hollywood actor, a former vice president and a bipartisan group of politicians that includes former Pennsylvania Gov. Tom Ridge. 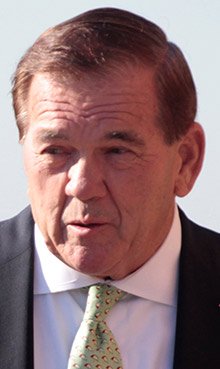 In a statement after McCain's death, Ridge called the senator a "dear friend."

"...What a privilege it has been to have such a friend as John. Has there been a more courageous patriot, who over the last half century was more widely respected globally or who was as fierce a proponent for American exceptionalism than John?

"America is a greater nation thanks to John McCain. His contributions and legacy will forever endure."

McCain, a 31-year U.S. senator, former presidential candidate and former U.S. Navy pilot who was shot down during the Vietnam War and held captive for more than five years, will be buried Sunday at the U.S. Naval Academy in Annapolis, Maryland.

He would have celebrated his 82nd birthday on Wednesday.