Once upon a time here in Philadelphia, Tony Bruno was a recognizable voice sharing opinions about sports and whatnot on the radio airwaves.

That all changed in 2015 when he “decided to resign from WIP and from regular long-form terrestrial radio [to] pursue my podcasts and other things to keep me occupied and happy.”

After that decision left sportstalk-radio fans to deal temporarily with the dreckmonger known as Josh Innes, the AARP-eligible, goateed Bruno peddled his hot podcast takes on “The Tony Bruno Show.”

It streams every Wednesday from 7 to 9 p.m. on Facebook LIVE. Though I thought he was a decent host back in the day, I’ve not yet heard this podcast. I’m sure his fans love it dearly. Good for him. Good for them.

What I have heard – well, saw – on Facebook was a post that the guy who lost to Innes made on Friday night.

Before the backpedaling commenced, it read, “I’m not a violent man, but if I was in high school, I’d take the @davidhogg111 kid behind the gym and beat the hell out of him.”

Yes, you read that right. A 65-year-old man wishes he had a wayback machine so he could physically assault a Parkland survivor who’s rattled a lot of ammosexual’s cages by successfully and loudly pushing back against NRA nation. 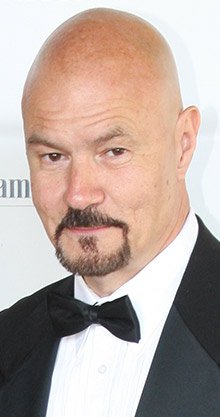 He’s clearly not alone in his disdain for a high-school student that’s been given a platform and used it the way he’s seen fit after young corpses in zipped-up body bags were wheeled out of Marjory Stoneman Douglas High School in Florida.

As such, a lot of megaminds attaboyed him for sharing such an opinion. But a lot of sane minds took note, as well, and dragged him for his ignorance.

That’s when Bruno’s caveats were typed.

But, but, I just KNEW that people would think my statement was wrong while Biden’s was “just fine,” and that that’s emblematic of “rampant and undeniable” hypocrisy.

He then added a Trumpian “Sad” closing to close an excuse that can be defined – at best – as developmentally deceitful.

What’s sad is thinking and posting it in the first place.

What’s the saddest thing of all is lashing out at a teenage kid who’s screaming truth to power in the wake of national tragedy out of the misplaced fear that he will come and seize your guns when, in fact, people yearn for common-sense gun control instead of thoughts and prayers from politicians controlled by the gun lobby.

If these words were uttered on WIP, I reckon Bruno would be facing a suspension or dismissal by now.

Since he lost a power struggle and slinked away, he doesn’t have to worry about that happening. Happy!

When I shared his post on Facebook on Friday night under the intro “Washed-up douchebag says what?” the emboldened former radio host offered a pithy, well-thought retort: “As opposed to a nobody hack who writes for a paper nobody reads?”

At the same time, I suppose we’re about to find out just how many people will read what this nobody hack wrote about him online (not in a paper, Tony), aren’t we?