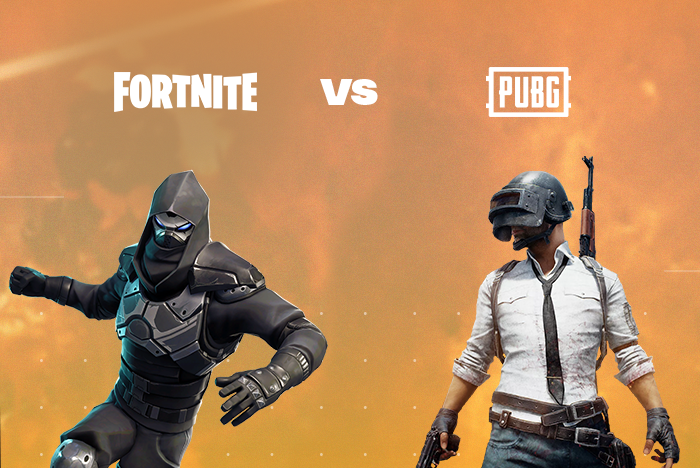 Ask any gamer from this generation of shooting games about the top battle royale games. They may state their favorites from the list of newcomers. Still, most will recognize Fortnite and PUBG as the grandfathers of the new video game subgenre. In fact, both Fortnite and PUBG are synonymous with the genre itself.

Games like Apex Legends and Call of Duty Warzone have been created thanks to them and some less popular others. While they have similarities, Fortnite and PUBG are different games. You don’t have to dive that deep beneath the surface to determine how Fortnite compares to PUBG.

What is a Battle Royale?

As mentioned before, defining a battle royale is as easy as saying “Fortnite” or “PUBG.” Most people know what those games are and are familiar with how they are played. Ultimately, the game starts all the players in some type of flying apparatus that floats really high over a map for a short time while all the players on board pick a spot on the map to jump to with the hopes of landing on some delicious loot to survive the initial rush of landing.

Once you’ve landed and declared it’s safe, you run around like a chicken with its head cut off and scoop up everything you can find to help you kill the other team faster. While this is happening, a wall of gas, fire, smoke or lore-based energy is closing in, damaging those who dare to remain in its grasp. Eventually, you’ll be in a standoff with the remaining teams who you didn’t kill until one person or group is the “last man standing.”

While this chaotic description explains a single round of a given battle royale game, many nuances make all of the available battle royale games stand out from one another. At its surface, it’s just a PVP rogue-lite where you start another round fresh and are tasked with surviving until the very end. However, in the case of games like Fortnite and PUBG, the differences make them feel like totally different games.

Before you even play the game, you can tell that the developers of Fortnite and PUBG - Epic Games and Krafton, respectively - have different styles regarding the art direction and graphics they chose to represent their games. While PUBG’s user interface and character models resemble something more realistic and taken seriously, Fortnite opted for a much goofier approach to their in-game animations and graphics.

In PUBG, the fonts are familiar texts that you’d see in a book or a traditional poster. It feels more like Call of Duty than the two. It resembles war and may feel more competitive to newcomers jumping into their first match. At the same time, Fortnite feels more lighthearted. Even though you’re blasting each other’s faces off with shotguns, the goofy fonts and playful sound effects make it feel more like a children’s game, which arguably is why the target audience is younger than many other shooting games in this generation.

Audience and its influences on Fortnite and PUBG

It’s no secret that Fortnite and PUBG have different audiences. While PUBG focuses on audiences looking for a more intense survival shooter to play in their free time, Fortnite uses its unorthodox playstyle and graphics to cater to a younger audience. That doesn’t mean that adults don’t play Fortnite.

Fortnite has been out for a long time, so middle-school players who are now adults still play the game. Also, adult streamers and content creators used Fortnite to connect with audiences of all ages. PUBG naturally seems more balanced within its target market, but the player base is older than Fortnite’s.

Gameplay and Mechanics in Fortnite and PUBG

This is probably the most glaring difference between these two games, as Fortnite’s title is one of the more immense contrasts. If you aren’t living under a rock, Fortnite heavily emphasizes its material-based fortress building mechanic. There isn’t a technical term for it, but high-level Fortnite players have won competitive matches because of their fort-building skills. You cannot be successful in gunfights without having at least an intermediate to advanced level of understanding when it comes to fort logic in Fortnite.

Because of this, players spend more time in private lobbies honing their building skills than learning weapon metas and increasing their aim. Contrary to Fortnite’s emphasis on building mechanics, PUBG maintains a traditional focus on gunplay skills and map knowledge. As long as you play long enough and learn specific weapon meta and area strategies of the battlegrounds, you can be successful.

One other significant comparison is the player’s point of view. While PUBG runs traditional first-person points of view for its players, Fortnite is in third-person, which tremendously changes the game's pacing. There is no better point of view for players. It’s purely preferential, which players prefer, which may also explain why most hardcore gamers stay away from the third-person masterpiece that is Fortnite. First-person shooters tend to have a heavier focus on aim and precision. Third-person shooters notably favor environmental immersion and strategy. The case stands for Fortnite being a third-person shooter. No gamer can imagine building walls as fun in first-person.

Both video games have had wild success in their communities, especially since it crosses paths with content creators, players, and the rest of the world. However, Fortnite keeps bringing more to the table, allowing them to rake in more money than competitors. In 2020, sources reported that Epic Games earned 5.1 billion dollars in revenue from Fortnite alone. PUBG brought in about 2.7 billion dollars. Please note that’s nothing to scoff at. That’s way more successful than video games that came out several years than it. It’s still, however, half of what Fortnite has brought in. It makes it obvious which game is more popular, but it doesn’t accurately depict the success in each community.

As stated many times before, PUBG is considered by many to be the grandfather of battle royales, Fortnite just so happens to be more of a household name than PUBG, and no one will argue that. More content creators became famous, and the community (although hardcore games don’t want to admit it) will agree that Fortnite has paved the way for some creative followers to shooters' newly sprouted battle royale subgenre. It has even bled into other genres. Forza Horizon 4 introduced a racing version of the battle royale, and Tetris and Mario have had their own “last-man-standing” showdown modes.

Both games are excellent pass-times for all ages and communities. If you like first-person shooters that are more serious and fill the “hardcore” gamer mold, then jump in the battlegrounds of PUBG. If you’re okay with being in a gunfight with players who can build 20-foot mansions faster than you can put up a single wall, hop off the Fortnite bus.

Regardless of your choice, you can make a return off the time you’ve invested in either game if you head on over to Eldorado.gg. You’ll be able to trade your Fortnite accounts or PUBG accounts for real money just like you would with NFTs or other digital collectibles. The value of time spent gaming is hard to quantify, so head over there before you boot your next session of Fortnite or PUBG today.