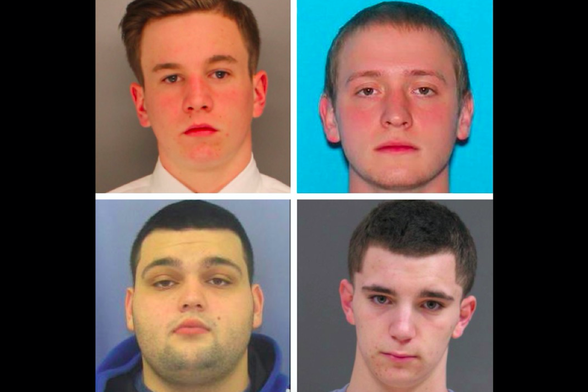 These are the four missing men believed to have been killed and buried in Buck County. Clockwise from the top left: Jimi Tar Patrick, Thomas Charles Meo, Dean Andrew Finocchiaro and Mark Richard Sturgis.

Funeral services for all four victims in the grisly murder case out of Solebury Township were announced on Monday, a day after hundreds of family members and friends attended an evening vigil in Lower Makefield.

On Thursday evening at the Fluehr Funeral Home in Bensalem, family and friends of Mark Sturgis will remember the 22-year-old resident of Pennsburg, Montgomery County who was among the four young men killed in what authorities have described as a series of drug deals gone violently wrong.

Services for Jimi Taro Patrick, 19, will be held at 10 a.m. Friday at the Church of St. Andrew in Newtown Township, his hometown.

An obituary for Dean Finochiarro says the family will hold a service from noon to 4 p.m. Saturday at the James J. Dougherty Funeral Home in Levittown.

A lifelong resident of Middletown Township in Bucks County, Finochiarro, 19, was an avid dirt bike rider and had been working at Richman's Ice Cream Company in Levittown. His favorite quote, his family said, was "Love the Life you Live and Live the Life you Love."

Remains were unearthed last week at the Solebury farm owned by the family of Cosmo DiNardo, the 20-year-old man who confessed to killing the victims with the assistance of his cousin, Northeast Philadelphia resident Sean Kratz.

After a week of intensive law enforcement efforts to locate the bodies on the DiNardo property, loved ones and strangers paid tribute online to the four young men who lost their lives.

Family members of the deceased thanked law enforcement officers for their hard work during Sunday night's vigil at the Garden of Reflection, a memorial to the victims of the 9/11 attacks.