Gallery Gameplan: So much art to heart this First Friday 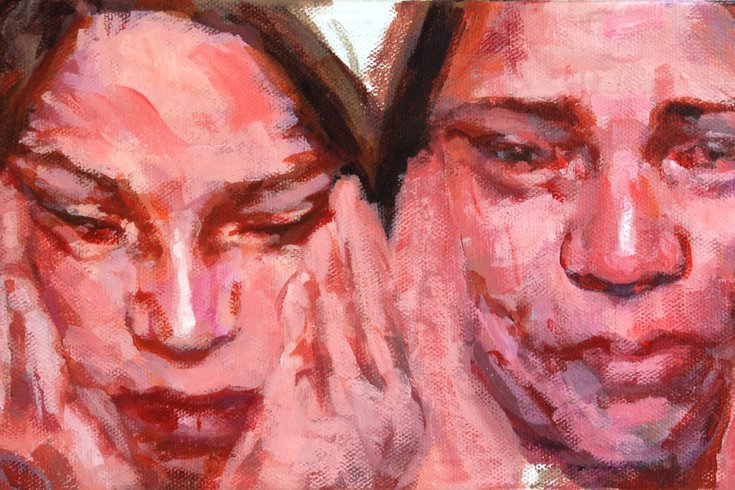 From “self-conscious portraits” by Linda Pompeo

The self-consciousness in the title of Linda Pompeo’s new show is twofold: She claims she’s actually rather shy about her art and doesn’t have a particularly strong online presence or knack for self-promotion. But the goal of this show, she explains, is also to be simply conscious of herself — and also of her 14-year-old daughter, whose portraits are in the show, too.

“This is my attempt at not just painting us as we look on the outside, but understanding us, being conscious of us,” she explains.

Her artist’s statement on the show references the “fragility and vulnerability” she says she feels as a woman, lesbian, mother, artist, daughter, spouse or any other “label.”

“For a long time I’ve seen the importance of not being shy or reticent about being out. The more people that everybody meets and sees … the less stigma and problems we encounter, possibly,” Pompeo says of issues that concern the LGBTQ community.

Because her pieces, like the ones in this show, are just portraits of faces, with no text, she says it’s been difficult to embrace how to be more overtly political in her work. But she agrees that just existing in artists’ spaces helps.

“Just being a woman artist is very political,” she says. “Women are so underrepresented in galleries. It’s a political move to just say you’re a woman … or an artist.”

Doing self-portraits, as opposed to doing portraits of other people, can be very freeing, she says.

“People often obviously want to look a certain way [when they’re having a portrait done]. That’s not as much fun, frankly … when I’m painting someone I don’t know, it almost feels like it would [if I were] painting flowers or something.”

“This is my attempt at not just painting us as we look on the outside, but understanding us, being conscious of us,” says Linda Pompeo.

The 11 acrylic paintings in this show, all of faces, Pompeo says, represent personal emotions and struggles, things she describes as “heavy.” But the display of such private and, indeed, self-conscious work perhaps represents an important journey.

“When I paint someone else, it’s a whole different ball game. You’re sort of aware of what they may want to look like. Whereas [with] myself, I’m pretty comfortable being merciless,” she continues. “I won’t object to my portrayal of myself.”

We’re excited about this one, Vox’s annual juried show, mainly because of how many artists from different cities it brings together under Vox’s roof. Jurors Gordon Hall and Brian Droitcour have brought together work from artists repping Philly, Miami, Baltimore, New York City, Cleveland and even cities in North Carolina, Arkansas and Wyoming. Another thing: A lot of the work of the artists in this show is similar — neon-bright, a little trippy and abstract.

A little primer on the work produced by some of these folks: Katie Duffy (Baltimore) does hypnotic video projection awash in color, as well as striking, abstract installations. Mark Joshua Epstein (New York) similarly works in bold color palettes, but with mixed media on paper among his materials. Delaney DeMott (Chicago) does some compelling installations/displays (check this description: “Digitally produced DeMott offspring based on an algorithm and woven into a throw (read: a blanket with his kid’s face on it), patchwork chair, hand-braided and sewn rug made of the artist’s clothing.” Marcella Marsella (Philly) makes collages-slash-mosaics out of chopped-up credit or debit cards and photo IDs, which just tickles us.

If you’re an Instagram user, you recall the struggle of taking any photos that couldn’t fit, erm, squarely, into the platform’s perfect box setup. Now there are additional apps to deal with that, Instagram changed its settings and so forth, but the way we process social media is still largely via pictures framed in squares. Kathleen Rose Geiger offers a commentary on that, with this show “inspired by Instagram” and “comprised of still lifes based on iPhone photos.” Says the artist: “These paintings seek to investigate how the use of social media and technology influences our visual language.” It raises the question: Are we in an age of being unable to think outside the box?