When not training a Stark, Miltos Yerolemou performs as ‘Puck’ in "A Midsummer Night’s Dream" 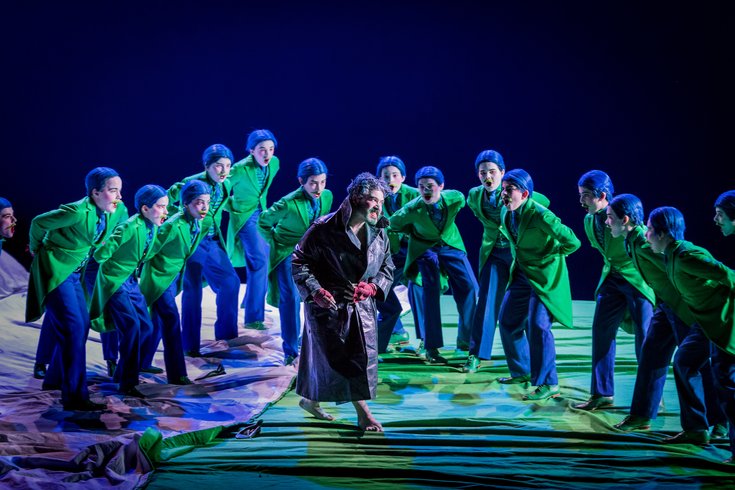 Robert Carsen’s celebrated staging of A Midsummer Night’s Dream has its U.S. premiere at Opera Philadelphia in February 2019, with Miltos Yerolemou (center) as Puck.

When British composer Benjamin Britten’s musical take on Shakespeare’s “A Midsummer Night's Dream,” holds its U.S. production premiere with Opera Philadelphia starting Friday, it comes with a handful of vocalists well-versed in the ways of Britten.

One-time Curtis Institute of Music Philly grad Matthew Rose is but one of those dynamic vocalists who have performed Britten’s work in the past.

Yet, it is a non-singer who takes pop cultural prominence here. Miltos Yerolemou has played Shakespeare’s sprightly ‘Puck’ in this opera, on-and-off, since 1991, and will again this week for the production at the Academy of Music, which ends on the 17th.

But for non-opera buffs, Yerolemou is also best known as the sword-master Syrio Forel  - the man who instructed Arya Stark in the ways and philosophies of physical combat for several seasons - in the epic HBO blockbuster “Game of Thrones."

PhillyVoice caught up with Yerolemou on a break from frolicking across the Academy of Music rehearsal stage to discuss Shakespeare and "Game of Thrones, which is entering its final season this April.

Q: What would you say was tougher to train for: the rigors of Shakespeare’s language or the physical challenges of “Game of Thrones?”

A:  I quite like the way you’ve tied the two together. The funny thing is, with the language of Shakespeare, is that it is intensely muscular. You have to approach it, then, like an athlete. All that imagery, all those rhymes and carefully constructed, long-winded arguments – you have to keep hold of those in your mind while on stage. That takes technique and a lot of energy, and approach it like a sportsman. That and swordplay choreography have more in common, then, than people would imagine.  There’s just as much practice and repetition in swordplay. The more you do it, the more you understand it.  Choreography is a challenge to match. I could watch dance moves and replicate them easily. And you never get bored, as there’s always something else to learn, and new to unlock. Same as Shakespeare.

Q: You mention dance in regard to the swordplay. What style of dance?

A: I’m thinking just as much of contemporary dance and physical comedy here, especially silent movie comics. I love being a clown, a cut up. That helped immensely while inhabiting and staging Game of Thrones scenes and fight choreography. The physicality of swordplay is just as heightened as tackling Shakespeare.

Q: Considering that you were on “Game of Thrones” starting in season one, did you gather immediately how huge it would become? How obsessed audiences would become?

A: I don’t think we did. I remember standing outside the hotel during a first season read-through with all of the actors in the initial three episodes. I remember sharing very nervous cigarettes outside the hotel with Kit (Harrington, “Jon Snow”) and Alfie (Allen, “Theon Greyjoy”), all talking about our involvement in this THING. In the U.K., George R. Martin’s books weren’t as popular as they were in the U.S. We knew it was going to be good, mind you. Remember, HBO’s original tagline was ‘It’s like ‘The Sopranos,’ only in Middle Earth,’ so we knew the network was behind it. We never realized that it would become a cultural phenomenon.

Q: Oddly enough, for a show that is unafraid to show graphic violence and bloody death scenes, we never actually saw you die. It was only alluded to – that you got involved in a fight in the shadows, then zip. Is your character returning in this last season?

A: Now, you know I can’t answer that in any way-shape-or-form. It’s interesting, though, that George Martin wrote that episode in season 8 where I have that battle with the Lannister’s guard. He didn’t write many. He could’ve done anything he wanted to with that fight. I have a theory, and it gives nothing away, mind you: in the books, Arya always remembers Syrio’s words and deeds, they stay with her, those early lessons. They shape her. If Martin had written an explicit death for Syrio, it would kill the ghost in the same way that Jedi’s come back as Force Ghosts in Star Wars. If you saw the death, something would die or change in your mind. Now, there’s an echo that stays with Arya, and that is one very sophisticated storytelling device.

Q: You told me nothing, but you told it beautifully. Back to Shakespeare and “Midsummer Night’s Dream” – you have been doing ‘Puck’ for some time within this opera. You’re not a kid or a man-child, yet ‘Puck’ is traditionally sprightly, even though he is an older character within the framework of the play. How is your ‘Puck’ your own?

A:  This is the thing, right. I was fearless when I was younger. Still am, though I’m more aware of my mortality. I was far too young to play ‘Puck’ when I first understudied for the role in 1991. That character used to be one of the play’s cute and pristine faeries, but he grew up and aged out. He got old, gone to seed and his hair is all over the place. Disheveled, yes. That’s why, right now, I am just old enough – the perfect age – to play ‘Puck.’ I no longer need all the drastic age make-up and padding. Now I am suitably disheveled.