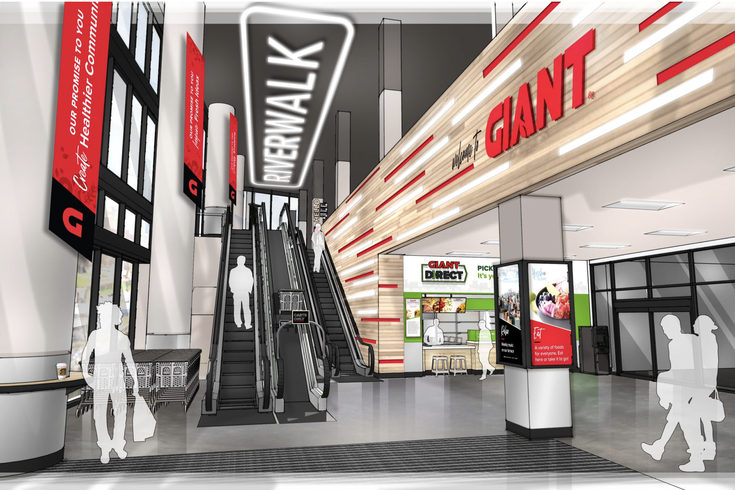 Giant's urban flagship supermarket in Philadelphia will open at the Riverwalk development in Logan Square on March 19, 2021. The two-level store, located at 60 N. 23rd St., features a food hall, beer garden and terrace.

The Giant Company's ongoing expansion into Philadelphia will make its biggest leap yet next month with the debut of a flagship, two-level market in Logan Square.

The project, announced last year, is the centerpiece of the new Riverwalk mixed-used development. The 65,000-square-foot store will be located in a 25-story residential building at 60 N. 23rd St., just east of the Schuylkill River.

“Philadelphia’s grocery scene is experiencing a major renaissance and The Giant Company has been at the forefront, introducing new formats, opening new stores and expanding grocery delivery services," said Giant president Nicholas Bertram. "Our Riverwalk store celebrates this transformation, offering an elevated omnichannel grocery experience unlike anything Philadelphia has ever seen.”

The store is set to open on March 19 with a community grand opening ceremony where Giant will announce a round of donations to nonprofits that benefit families in both the immediate Logan Square neighborhood and greater Philadelphia.

A ground level parking garage will offer access to the store's lobby, which includes a full-size Starbucks, a Giant Direct pickup station for online orders and walls adorned with the work of local artists.

Customers can use an elevator, escalator or stairs to access the market on the second floor. Residents of the building will have access using a private elevator, while guests can use a cartalater to transport their shopping carts back to ground level.

A food hall inside the market will feature options from Mission Taqueria, Saladworks and Hissho Sushi, along with made-to-order sandwiches, flatbread pizzas, smoked meats, hot foods and gelato. A beer garden with a self-serve tap wall will offer more than 40 craft beers, wines, hard seltzer, cider and kombucha on tap.

The food hall overlooks the Schuylkill River and 30th Street Station, with an outdoor terrace that includes lounge-style furniture and fire pits. 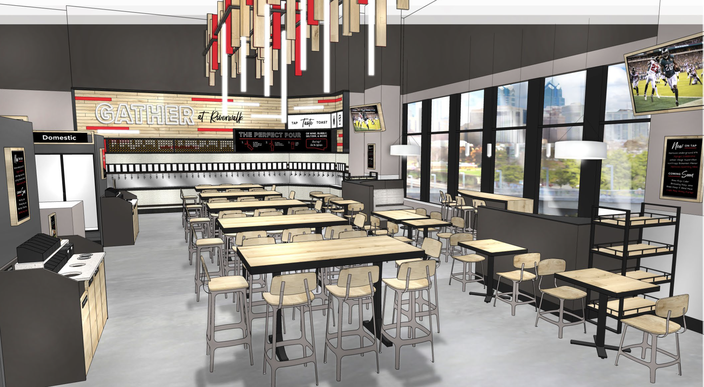 In addition to full-service meat, seafood and deli departments, the store will feature Giant's largest plant-based section to date, with a variety of Impossible and Beyond products, vegan cheeses, ice creams and other desserts.

Locally sourced products at the store will include a selection from One Village Coffee, Claudio’s, High Street Philly, Asher’s Chocolates and Isgro Pastries.

Jessica Fischer, a 22-year veteran at the company, will be the manager of the Riverwalk store.

“Having been with the company for more than 20 years, I can confidently say that in everything we do, we aspire to deliver a grocery experience that inspires and excites our customers and to be a community partner that lifts up the families and neighborhoods we serve in every sense of the word - Riverwalk will be no different,” said Fischer.

The opening in Logan Square comes on the heels of Giant's announcement this month that it will open another 67,000-square-foot market later this year at Cottman and Bustleton avenues in Northeast Philadelphia.

Giant has rapidly expanded in Philadelphia over the past few years, adding small-format Giant Heirloom stores in South Philadelphia, Northern Liberties and University City. The company has an existing supermarket on Grant Avenue in Northeast Philadelphia, a few miles north of the planned new location.

The company also is working on completing an e-commerce fulfillment center slated to open in November on Island Avenue near the Philadelphia International Airport.

The Riverwalk store is expected to employ 220 team members upon opening. Those interested in joining the team are encouraged to look online for hiring opportunities.

“Expertly designed to meet the needs of urban dwellers, our Riverwalk store is the perfect blend of modern sophistication and surprise, and of course, pays homage to the city’s fantastic food scene," Bertram said. "We can’t wait for opening day and to finally let the community discover what we’ve created for them – a one stop destination for all things food. It’s the sum of the team’s very best work and is a tangible symbol of the Giant Company’s continued focus on omnichannel growth, innovation and above all else, families and community.”