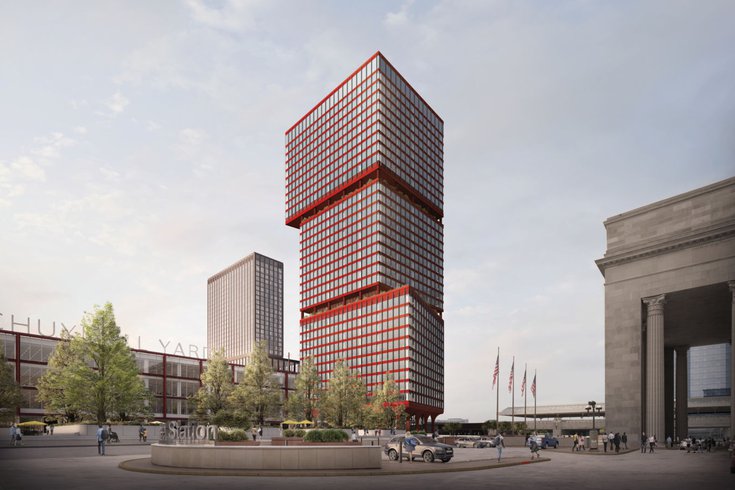 A rendition depicts The West Tower at Schuylkill Yards, left, alongside the East Tower that eventually will accompany it. The West Tower will include luxury residences, office space and retail shops when it opens in 2023.

Brandywine Realty Trust will break ground next month on a 28-story tower that marks the first vertical development in the Schuylkill Yards project underway in University City.

The West Tower at Schuylkill Yards will include 326 ultra-luxury residences, 20,000 square feet of life science and innovative office space, 9,000 square feet of retail shops and indoor and outdoor amenity spaces. The tower is scheduled to be built by October 2023.

Brandywine announced Thursday it is partnering with a global institutional investor to fund the $287 million tower, which will be built at 3025 JFK Boulevard. The investor's identity was not disclosed.

A second tower, the East Tower, is on the horizon too. The two towers will be linked by Highline park.

The West Tower was designed by the Practice for Architecture and Urbanism, HDR and a team of engineering firms. Health and wellness, technology acceleration and integrated work and life experiences were incorporated into the overall design, according to Brandywine.

Gotham Organization, a New York City-based developer, is assisting with the residential components. This project will be Gotham’s first Philadelphia-based project.

"We have been enamored by the growth and diversification of the residential marketplace and fascinated by the new neighborhoods popping up all over the city," said David Picket, CEO of Gotham Organization. "Philadelphia is a city on the rise and deserving of what we believe will be a unique and inspiring living experience at The West Tower at Schuylkill Yards."

Brandywine is developing the 14-acre, $3.5 billion Schuylkill Yards innovation neighborhood project in partnership with Drexel University. The project broke ground in 2017 after they drew up master plans for a two-decade-long development effort.

The project is still in its first phase of development, but has produced Drexel Square at 30th and Market streets. The West and East Towers and a redevelopment of the former Bulletin Building are next on the docket.