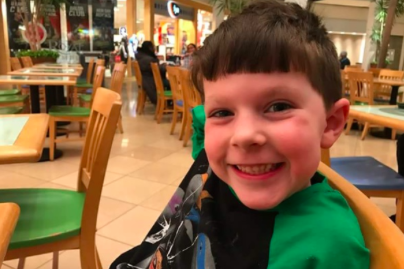 John Bruno, 5, died on March 18 after a tragic incident at his family's home on the 1900 block of Palomino Drive in Warrington, Pennsylvania.

A Warrington family is mourning the loss of their 5-year-old boy, who died Saturday following a tragic incident involving their dog in the aftermath of last week's winter storm.

When emergency responders were called to the boy's home last Thursday, John Bruno's mother said she found him face down and unresponsive in the snow, with the family's 18-month-old hound mix tugging at his scarf.

Authorities initially believed Bruno's death may have been caused by cardiac arrest, but the Philadelphia Medical Examiner ruled Saturday that he died of "accidental strangulation," the result of the dog cutting off his airway.

The boy had gone outside to play dressed in a full snowsuit, a hat, gloves, boots and a scarf that was wrapped tightly around his neck.

When CPR failed to revive Bruno, he was taken unconscious to Doylestown Hospital and later transferred to Children's Hospital of Philadelphia, where he was placed under "heavy sedation," according to The Intelligencer.

"John Bruno was a vibrant 5-year-old boy," Amy Ploss Herbert wrote on GoFundMe page for the Bruno family. "His smile and boundless energy was electric. He loved Ninja Turtles, Pokemon, Superheroes and being silly. Above all else, John loved his mom, dad, and big sister."

The campaign's goal of $5,000 was far surpassed by Monday afternoon, totaling more than $16,500 in donations.

"Nothing we can do will bring their little John back but I do hope to ease the family's burden," Herbert continued. "The money donated on this page will be going to John's family to help pay for his medical and funeral expenses."