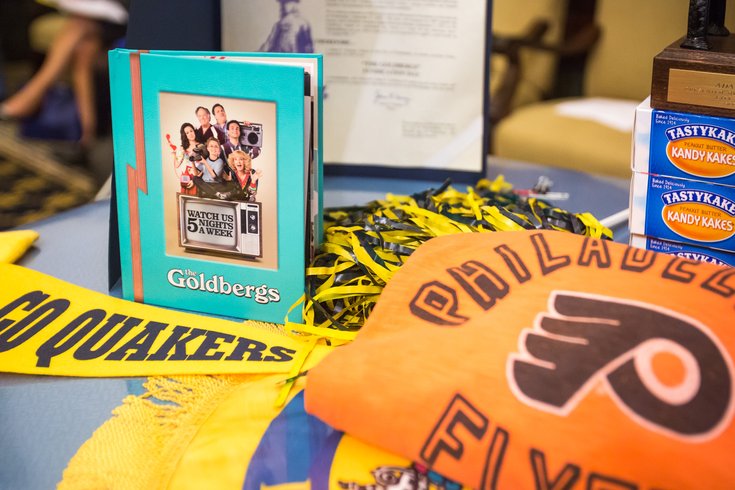 Few sitcoms have embraced a city like "The Goldbergs." Philadelphia and particularly Jenkintown, a borough less than a square mile with the smallest school district in the state, have been well represented by "The Goldbergs."

The show, set in the 1980's, was inspired by Adam Goldberg, the creator and show runner of the long-running ABC series, which is now in syndication.

After recently completing the sixth season of "The Goldbergs" and the first season of a spinoff, 'Schooled," which is a tip of the hat to his alma mater, Penn Charter, Goldberg called from his Los Angeles office to chat. Goldberg, who left Jenkintown in 1995, revealed how much of the show is based on his youth, what Philadelphia sports franchise has been most supportive and what initial review of the show bothered him most.

Q: What inspired your affectionate look back at Jenkintown and Philadelphia?

A: The concept of the show stemmed from my videos. What most people don't know is that my original concept was so different. It wasn't based in Jenkintown. The show was not "The Goldbergs" but "The Silvermans." (Former ABC President) Paul Lee suggested I make a show based on my family. He said I have enough of these videos to make 200 shows. He thought the snippets of actual video I shot during my youth be a great selling point for the show

Q: How much of the show is based on your childhood?

A: So much of it is. I revisit the Hiway Theater, Martin's Aquarium and Alverthorpe Park where we tried to sneak a beer. My experience when I tried to get into (Jenkintown bar) Buckets.

Q: Apparently your experiences in Jenkintown are relatable around the country.

Q: "The Goldbergs" has garnered mostly positive reviews. Do you read the reviews?

A: When the pilot premiered our worst review was from the Philadelphia Inquirer. They hated the show. I reached out to the writer of the article and asked him to watch the show again. I never heard back from him. He thought the family was annoying. He thought Sean (Giambrone, who portrays Adam) had no charm. He thought that it was about annoying people yelling at each other. When your hometown newspaper trashes you, it's a bummer but the cool thing is that Philadelphia really embraced the show.

Q: All of Philly's sports teams have been represented. Which franchise has been the most responsive to your requests?

A: The Flyers since from day one (The character) Barry (Goldberg) has worn all Flyers, all the time. It's free promotion for the Flyers. The funny thing is that people who don't know hockey see the Flyers shirt as a Barry shirt.

Q: Speaking of hockey, there's an episode when you're playing for the Old York Road Raiders and you're terrible. Were you that bad at ice hockey or is that hyperbole?

A: The funny thing is that my old hockey coach (Ike Richman) at Old York Road became one of the heads of the Flyers public relations staff. I started playing for him when I was about six-years old and he said I was the worst hockey player he ever coached, which I take as a point of pride. I have a lazy eye with no depth perception. There's an episode in which I scored in my own goal, that's all true. Ike remembers it.

Q: What is it about Philadelphia that makes it a good backdrop for a sitcom?

A: I think it's an underdog city. People root for the underdog. People from Philly are crazy about their sports teams. The city is a hidden gem. We're not Manhattan. We're not Chicago. We're not part of the cool crowd. We're a secret.

A: Brad Furman went to Penn Charter and was on the school bus with me for years! How is it so that Brad, Bradley and I are doing so well out here? It's a good question.

Q: How did your family end up in Jenkintown as opposed to the Main Line?

A: When my parents were looking for a house they had the option of buying a small house on the Main Line or buying the biggest house in Jenkintown. My mother loves big portions so we ended up in Jenkintown.

Q: I was paging through a Jenkintown yearbook from 1953 and it was like a Twilight Zone since the borough looks much like it did back in the day.

A: It's so true! You could shoot a period film in the Jenkintown Library. The only other place like Jenkintown is Ocean City, which is stuck in the '50s as well. When we went down to the shore it was a huge deal.

Q: Why is Jenkintown so frozen in time?

A: Great question. I don't know. Do you have any idea?

A: It's such a unique place and a good place for a show.

Q: You've covered so many bases when it comes to Philadelphia pop culture on "The Goldbergs.' What would you like to tackle next?

A: I want to do something on when "Wrestlemania" came to Philadelphia. I went to "Wrestlemania 2" with Hulk Hogan. When I was on (WMMR's) "Preston and Steve" show and they said that I should do a "Pulsations" episode. There's always stuff to do. We've yet to do a down the shore episode.

Q: And "Schooled" is about a Quaker school, which is quintessentially Philly.

A: The Quaker school is totally Philly. I'm a Philly guy even though I've been out here (California) for so long. I don't forget. Every episode proves that.