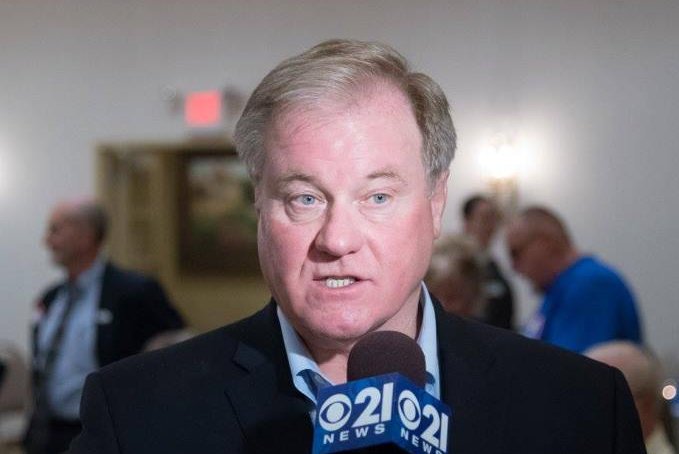 State Sen. Scott Wagner is among the candidate seeking the Republican nomination to run for Pennsylvania governor.

Scott Wagner, one of the candidates running for the Republican nomination for Pennsylvania governor, is walking back his praise of Gov. Tom Wolf's statewide disaster emergency declaration for the opioid and heroin epidemic.

On Wednesday, Wolf made Pennsylvania the ninth state to declare the opioid epidemic a disaster emergency, a move that enables officials to circumvent certain rules and regulations that hinder efforts to address the crisis.

Pennsylvania now has the fourth highest opioid overdose rate in the United States, including more than 5,600 deaths in 2017, Wolf said at a press conference.

“While I earlier commended Governor Wolf for coming to the table to provide long overdue leadership on the opioid epidemic, further review of his statewide disaster emergency declaration has made it clear that he took the wrong approach,” Wagner said in a statement.

On what appears to be a legal technicality, Wagner claims the emergency declaration — generally reserved for extreme weather — will bar licensed gun owners from carrying their firearms in public places. The state senator from York County cites a general rule from Title 18 of the Pennsylvania Code outlining crimes and offenses.

“No person shall carry a firearm upon the public streets or upon any public property during an emergency proclaimed by a State or municipal governmental executive," reads 18 Pa.C.S. § 6107.

“There is no reason why addressing this crisis should come at the expense of our Second Amendment rights," Wagner's statement continued. "The sloppiness of this declaration is another example of the incompetence of this administration, and calls into question whether this was a good faith effort from the Governor to help those suffering from addiction or just another thoughtless political ploy to silence the critics who’ve been saying he hasn’t done nearly enough on the issue.”

J.J. Abbott, Wolf's spokesman, dismissed Wagner's statement as political posturing, noting that frequent weather-related emergency declarations have not resulted in any curtailment of gun rights over the years. He fired back at Wagner in a statement on Friday morning:

"The governor's declaration does not allow for law enforcement to confiscate firearms, and the governor worked with law enforcement to ensure that his actions to fight this epidemic have no impact on citizens and their firearm rights. Any implication otherwise to score cheap political points around the greatest public health crisis in our lifetimes is flat-out wrong.

"The law specifically does not allow for any firearms to be seized, taken or confiscated as a result of the disaster declaration. A declaration specifically has no effect on people with a concealed firearms license, someone using a firearm with an active hunting license or someone open carrying a firearm if actively engaged in self-defense."

Wagner is among a wide field of Republican challengers to Wolf in the run-up to the 2018 gubernatorial election, which figures to be a litmus test on the direction of Republican policy forged during the first two years of the Trump administration.

Wolf has recently enjoyed a boost in approval ratings after emerging intact from another budget standoff with Republicans in the state legislature.

"We looked closely at this matter as part of the months-long process to develop this declaration," Abbott said, "and we are not aware of any adverse effects on citizens and their firearms in the past during such a weather event with a declaration."